Another Saturday game at Micks and another 15mm ACW Fire and Fury, this time the battle of Shiloh, one of the first 'large' encounters in the Western theatre.
Taken directly from Wikipedia here's a background to the encounter:
The Battle of Shiloh, also known as the Battle of Pittsburg Landing, was a major battle in the Western Theater of the American Civil War, fought April 6–7, 1862, in southwestern Tennessee. A Union army under Maj. Gen. Ulysses S. Grant had moved via the Tennessee River deep into Tennessee and was encamped principally at Pittsburg Landing on the west bank of the river. Confederate forces under Generals Albert Sidney Johnston and P. G. T. Beauregard launched a surprise attack on Grant there. The Confederates achieved considerable success on the first day, but were ultimately defeated on the second day.
On the first day of the battle, the Confederates struck with the intention of driving the Union defenders away from the river and into the swamps of Owl Creek to the west, hoping to defeat Grant's Army of the Tennessee before the anticipated arrival of Maj. Gen. Don Carlos Buell's Army of the Ohio. The Confederate battle lines became confused during the fierce fighting, and Grant's men instead fell back to the northeast, in the direction of Pittsburg Landing. A position on a slightly sunken road, nicknamed the "Hornet's Nest", defended by the men of Brig. Gens. Benjamin M. Prentiss's and W. H. L. Wallace's divisions, provided critical time for the rest of the Union line to stabilize under the protection of numerous artillery batteries. Gen. Johnston was killed during the first day of fighting, and Beauregard, his second in command, decided against assaulting the final Union position that night.
Reinforcements from Gen. Buell and from Grant's own army arrived in the evening and turned the tide the next morning, when the Union commanders launched a counterattack along the entire line. The Confederates were forced to retreat from the bloodiest battle in United States history up to that time, ending their hopes that they could block the Union advance into northern Mississippi. 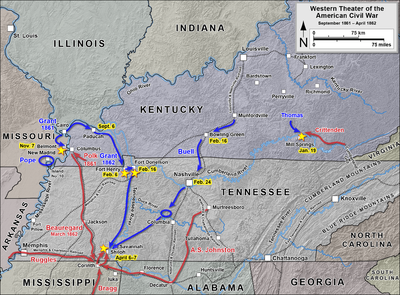 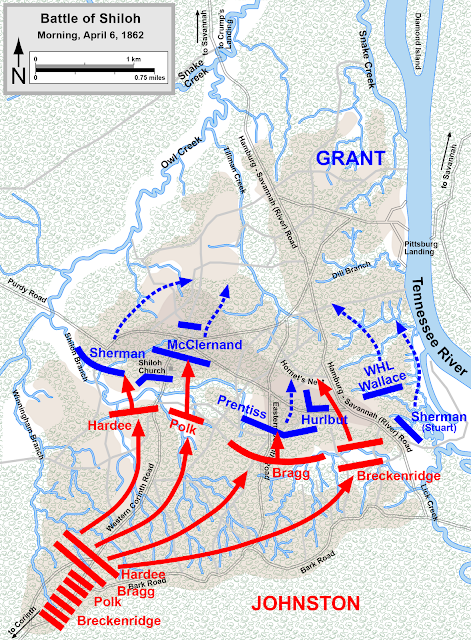 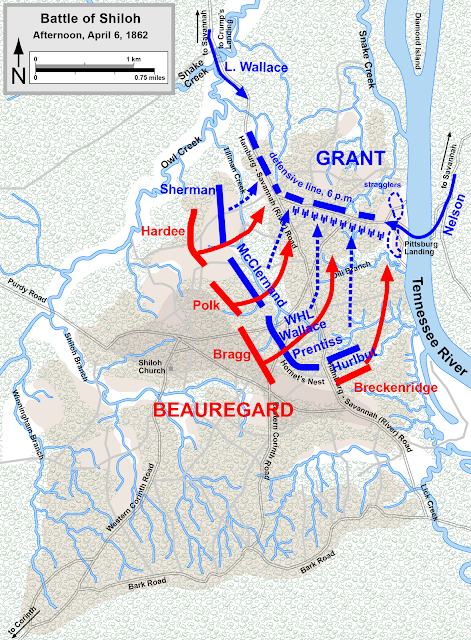 The Union counter attacked on the 7th after being reinforced, but as Neal and I could only make it for the re-fight of the first day then I've only included that days fighting on here.
The table was set up for Neal and I on arrival at Mick's place at 9am and Mick and Mike were waiting for us as we got there.

The table at 06.00 game time looking towards the Confederate end of the table with Pittsburg Landing and the bank of the Tennessee River at the bottom left of the picture. If there's a tree in the hex then it represents a heavily wooded area (as you can see there were a lot of wooded areas!) : 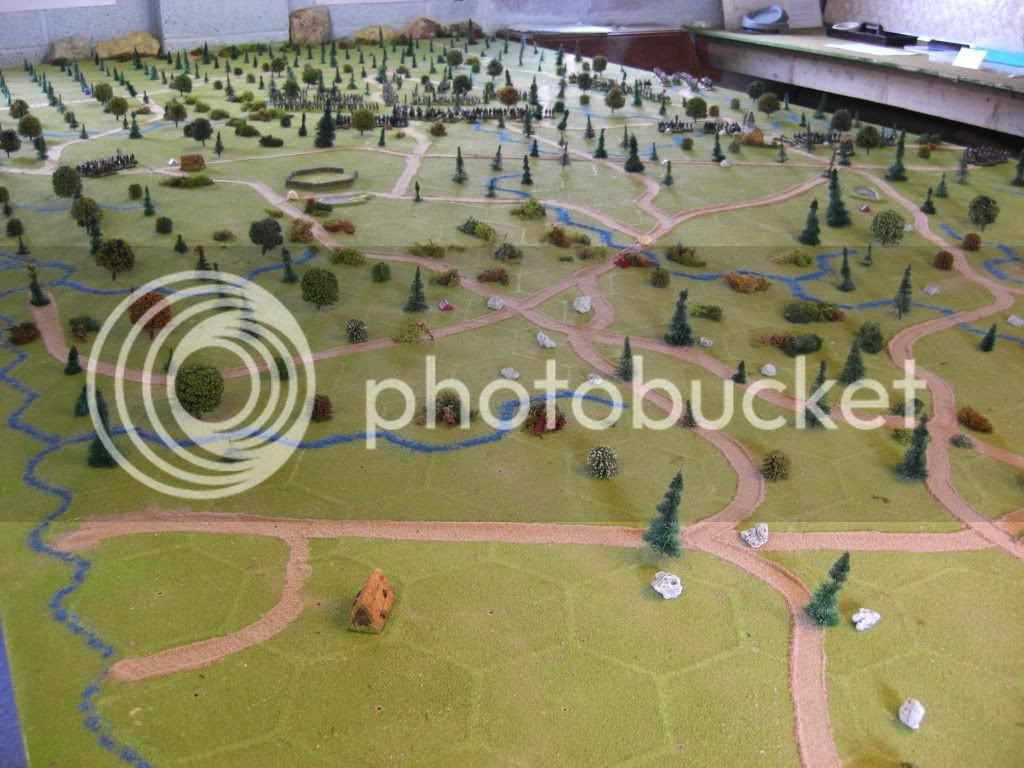 The Confederate troops storm out of the trees attempting to over run the Union positions. The red marker represents a camp marker(original positions of the Union brigades): 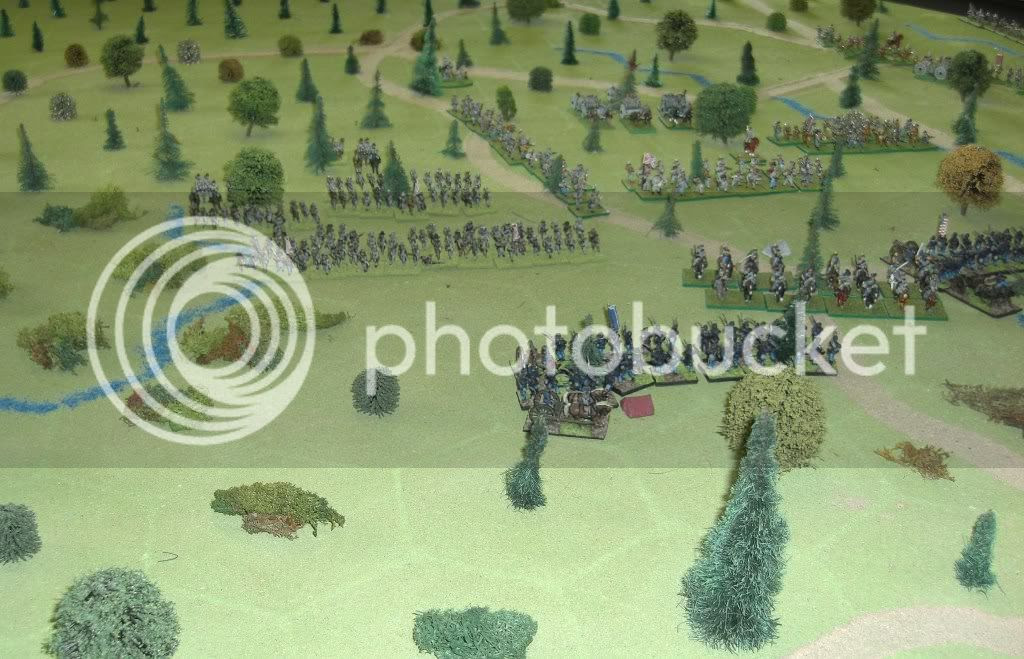 The Confederate Brigades move through the dense undergrowth: 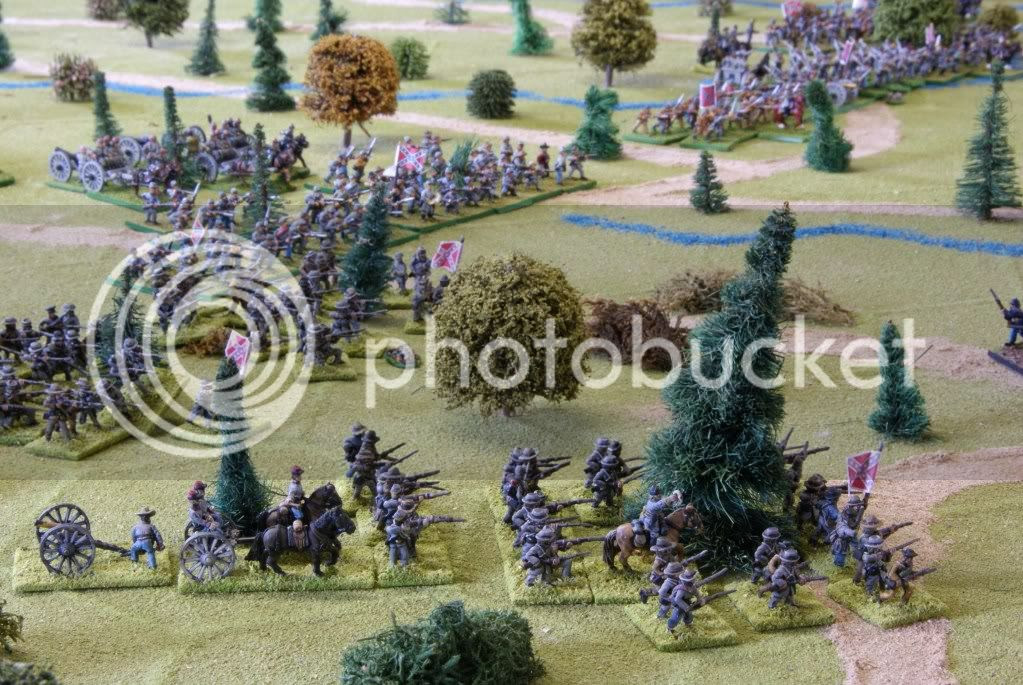 A view of the Confederate advance from either side of their lines: 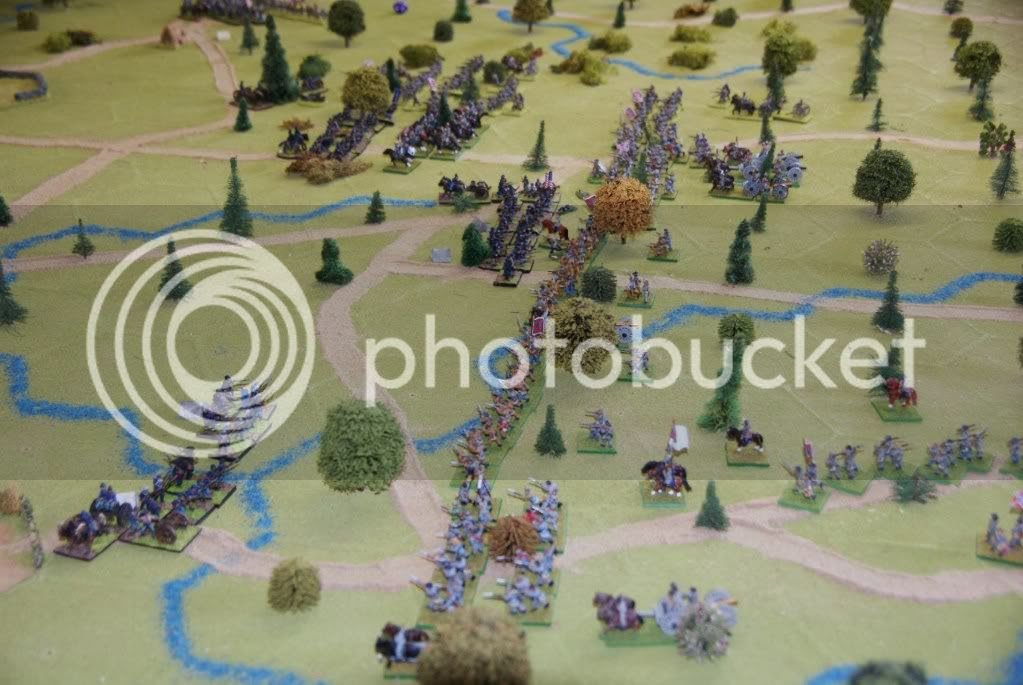 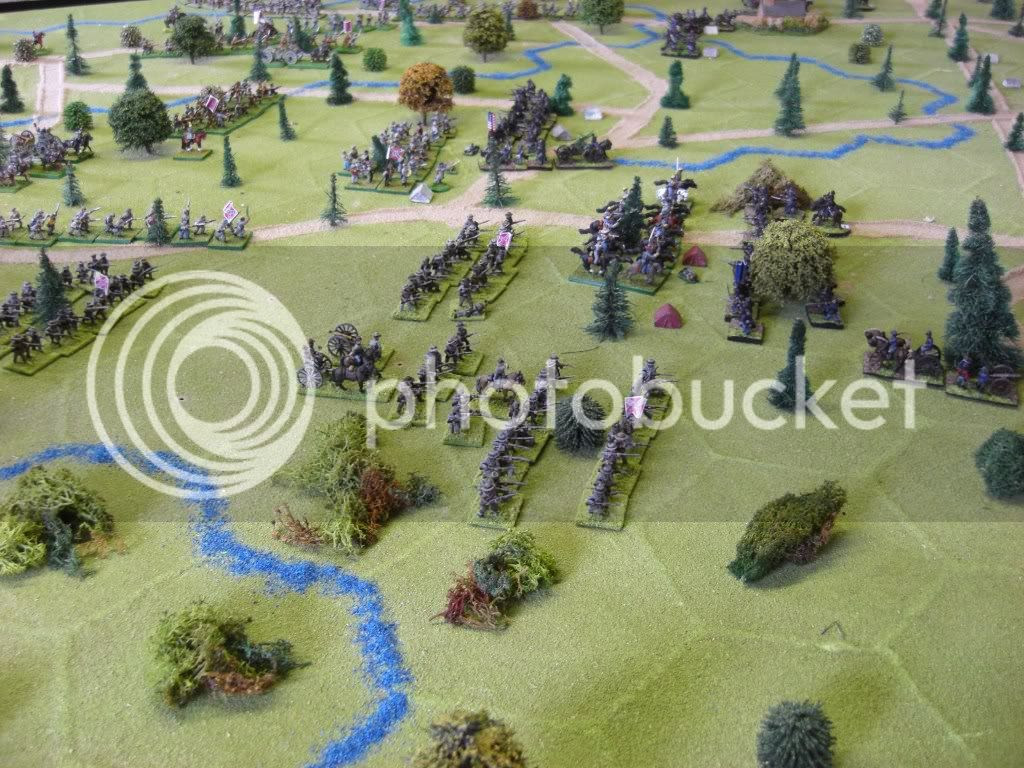 This particular Union brigade next to the Tennessee River was completely surprised and over run, the only thing saving it was the fact that the Rebs stopped to loot the camp! 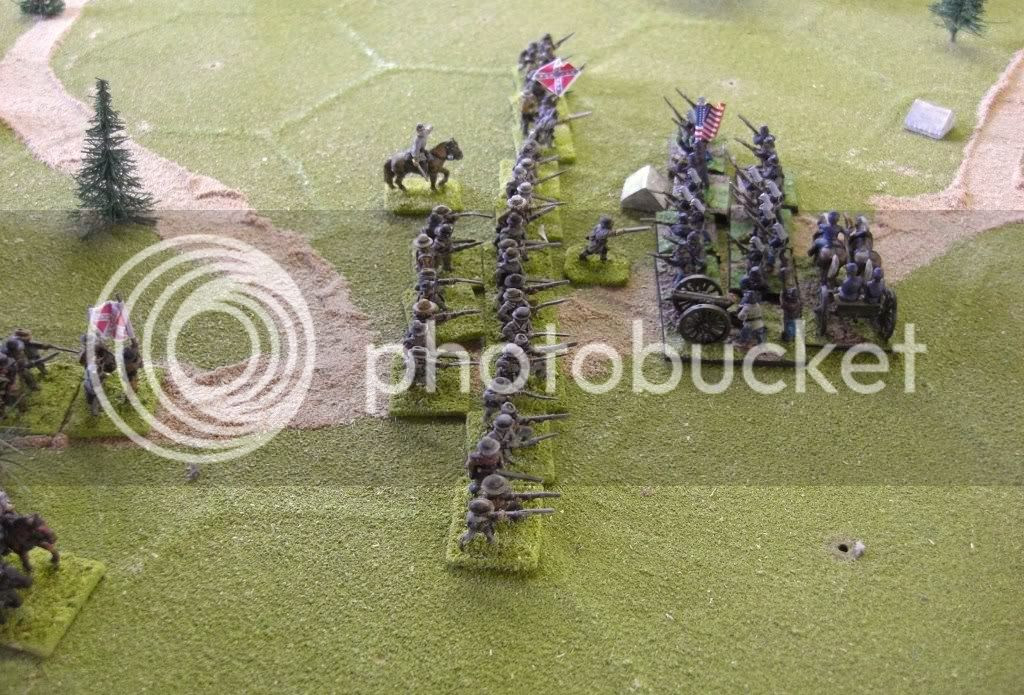 The right of the Union line next to Shiloh church: 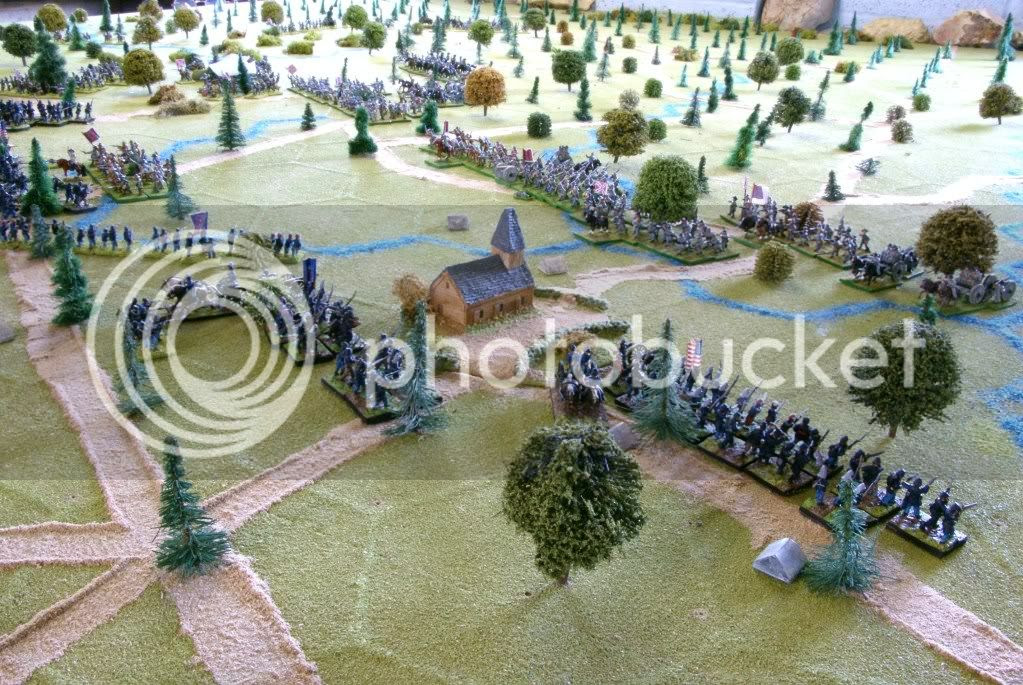 The Rebs storm on and press the Union Brigades hard, but for the moment the line appears to be holding: 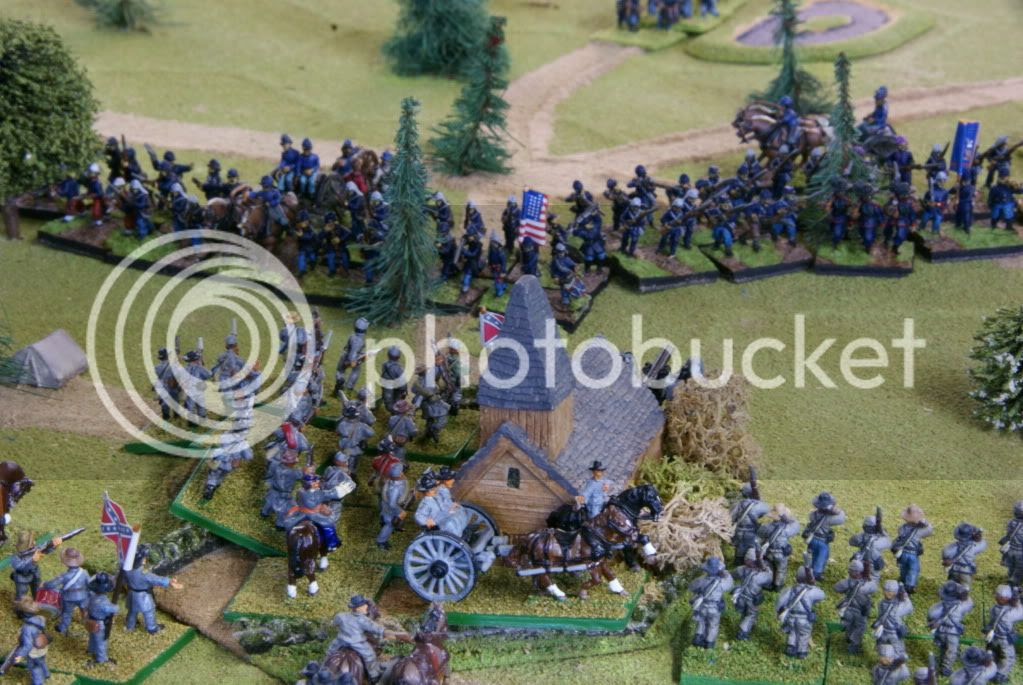 Heavy fighting takes place along the Sunken Road (running between the small pond on the left and that cream stone marker on the right) as the Union line begins to firm up. The Hornets Nest was to the front of this road: 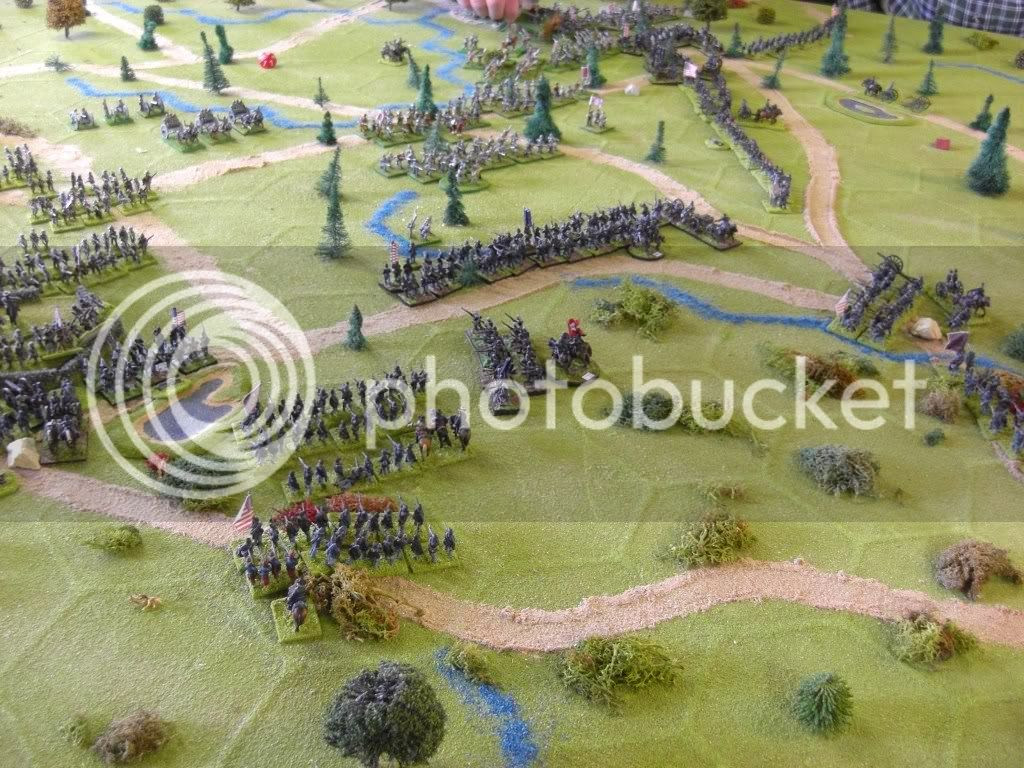 A picture of a Confederate Brigade making a breakthrough at the Sunken Road, Mick took out three of my artillery batteries with this charge. His Brigade was almost surrounded and took a beating but I think he considered it worth while! 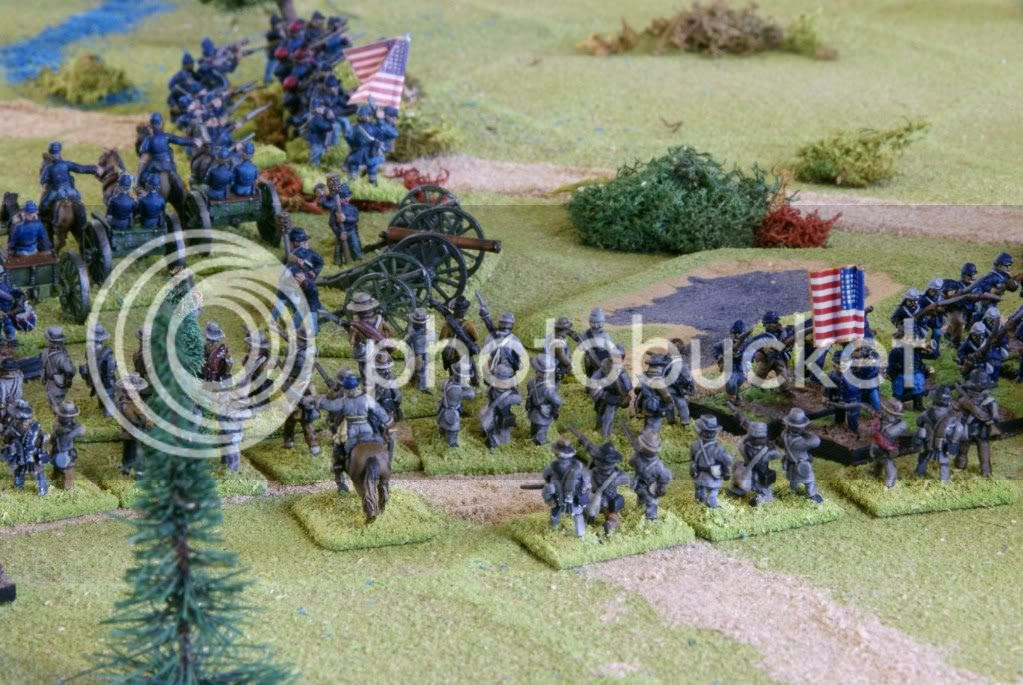 Heavy pressure at the riverside end of the Sunken Road (left flank of the Union army: 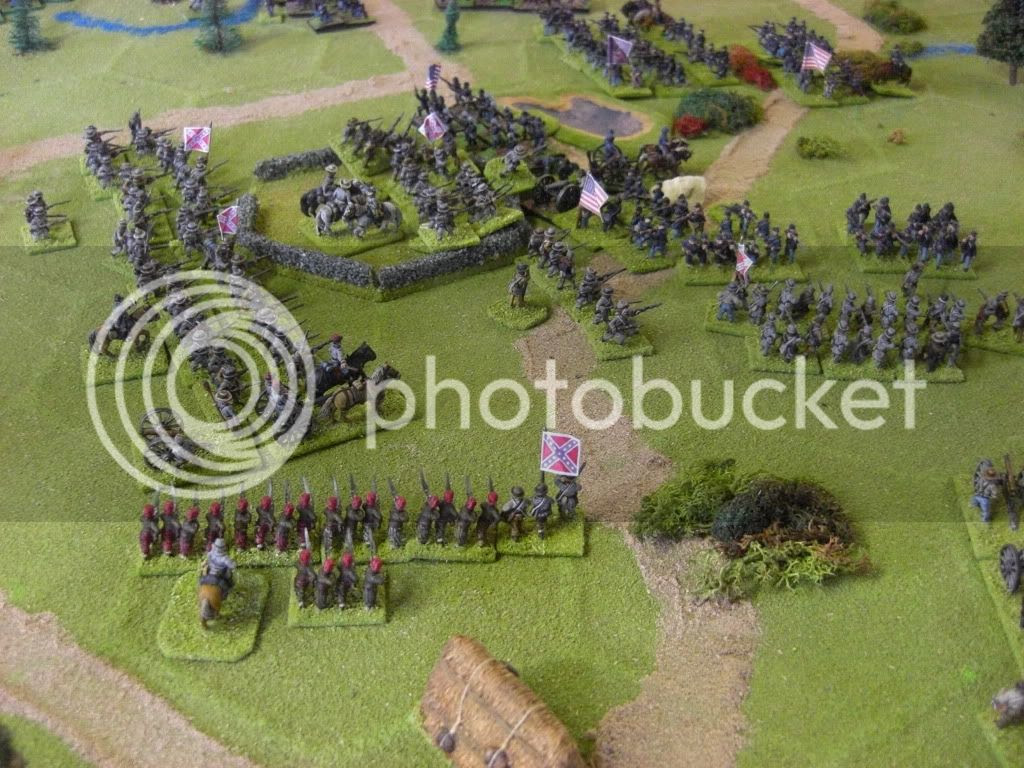 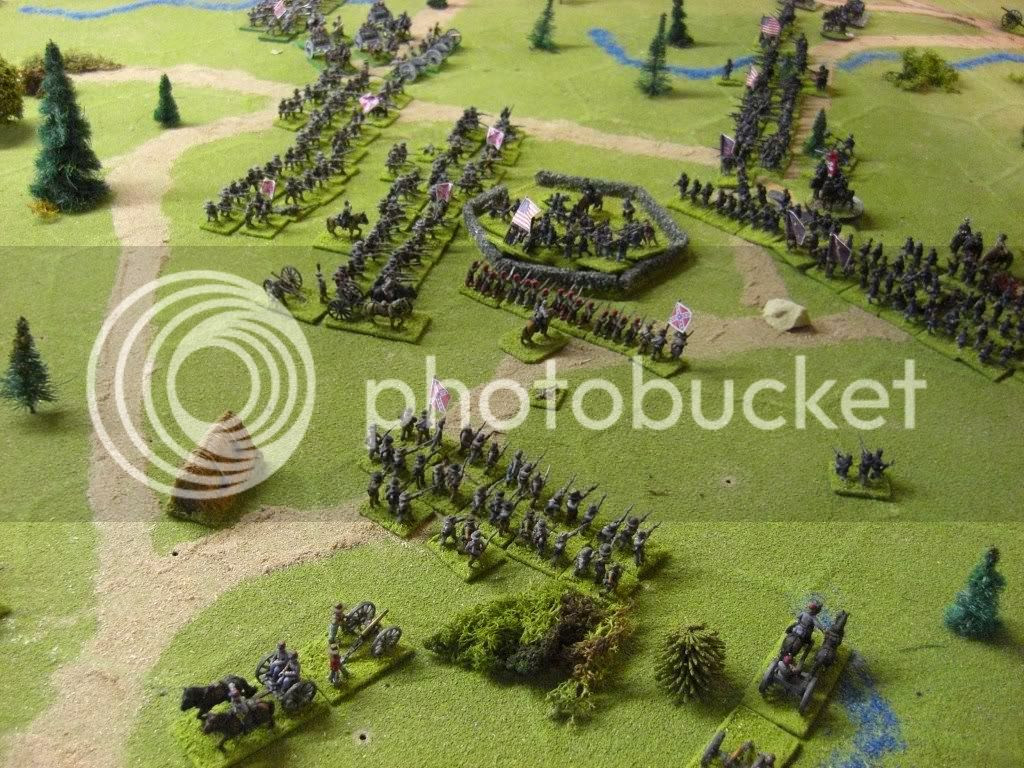 Finally a close up of a Reb Brigade going in: 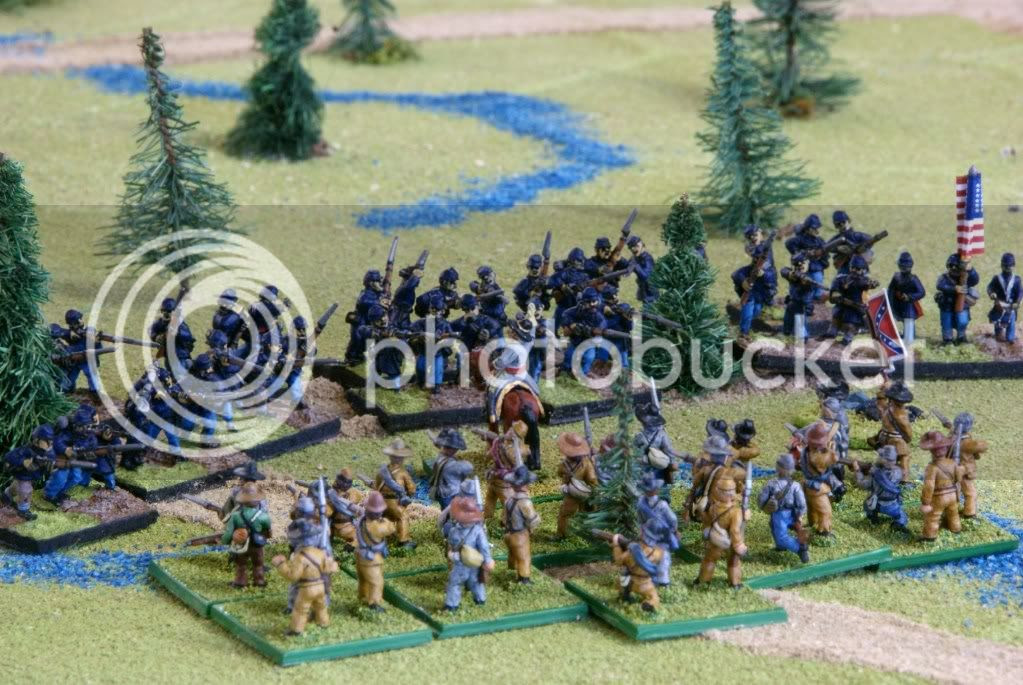 Unfortunately Neal and I had to head off at this point ( 13.30 game time). The situation was that though the Confederates had achieved surprise the Union Brigades had managed to fall back and form some kind of line.
This was mainly due to the fact that the terrain was abysmal (one hex move per turn in wooded areas, i.e. most of the table!), and that any Confederate Brigade moving through or past an abandoned Union camp had to stop for one turn to loot it.
I think Neal will agree that though he had put up savage resistance to Mike's attack that his flank (the Union right) was beginning to look decidedly shaky and that pressure was still heavy on my left flank.
The Pittsburg Landing was still secure and there was plenty of space to trade on the Union right flank, but with still half a day to go before Major reinforcements under Buell were due to arrive the outcome was in the balance (others will have to write up the second half of the game taking place Sunday).
Last but not leased a photograph of the regular participants. Left to right, Scotty, not there that day, but there in spirit (hope the wife is better mate), Mick our host, Mike supplier of the better photos on this post, muggins, sitting down as usual, and last but not leased Neal trying to look cool with the hands in the pockets! 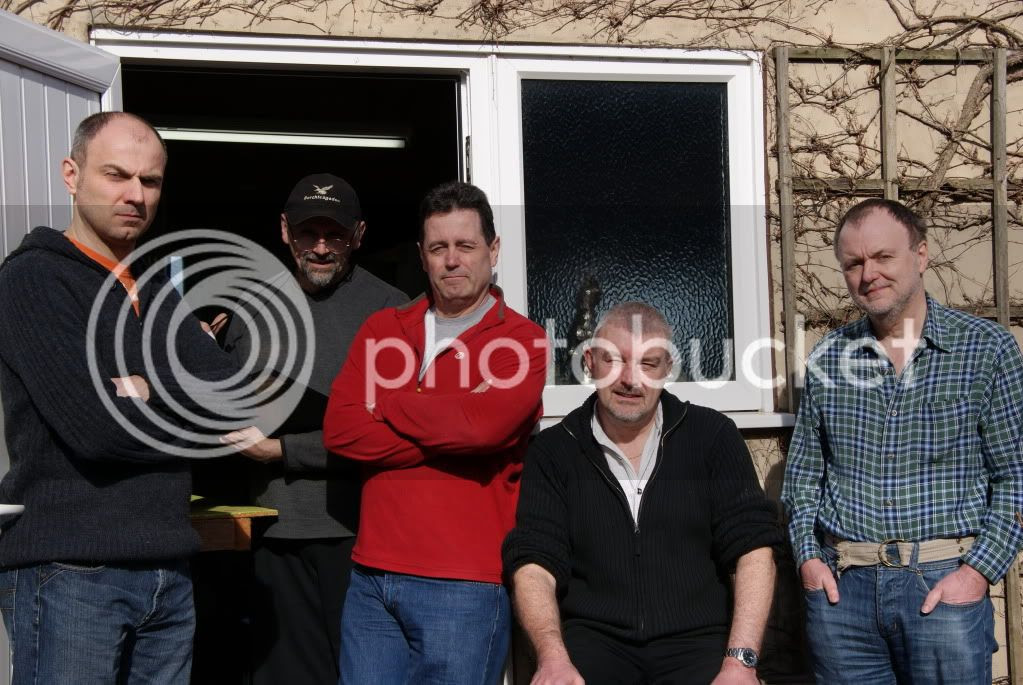 A game played at our club (Border Reivers, Blagdon nr Stannington Northumberland) Link recently was a match up between a defending Late Roman/Hunnic force vs a mainly Gothic cavalry army.
The armies lined up as below with the Goths to the right of the picture and the Romans/Huns to the left.

The Gothic centre was composed mainly of heavy cavalry with warbands in support and were poised to smash straight through the enemy forces to it's front. 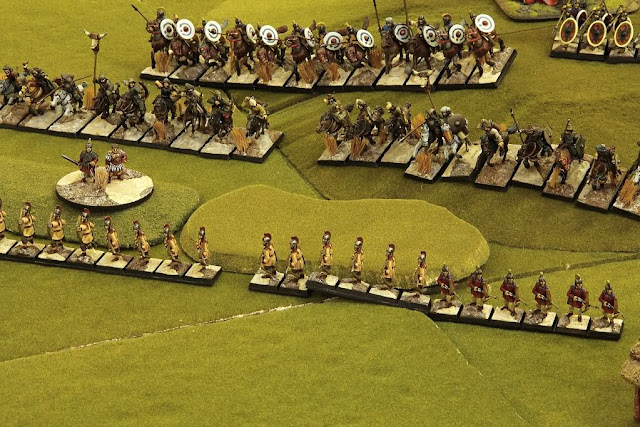 With the cavalry in the centre advancing the Gothic right wing moves forward in support. 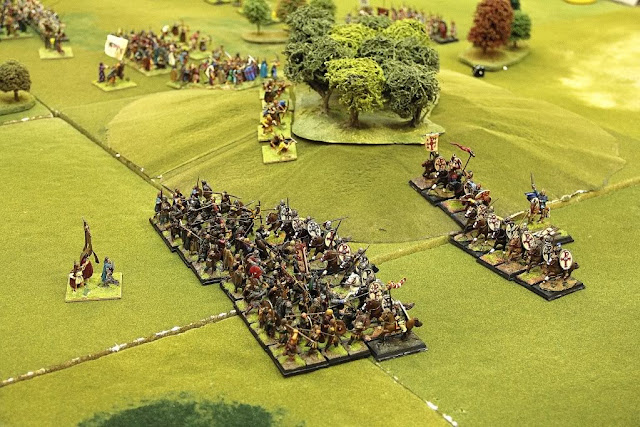 Foolishly the Hunnic lights got carried away and charged the advancing Gothic warband and were soundly beaten. 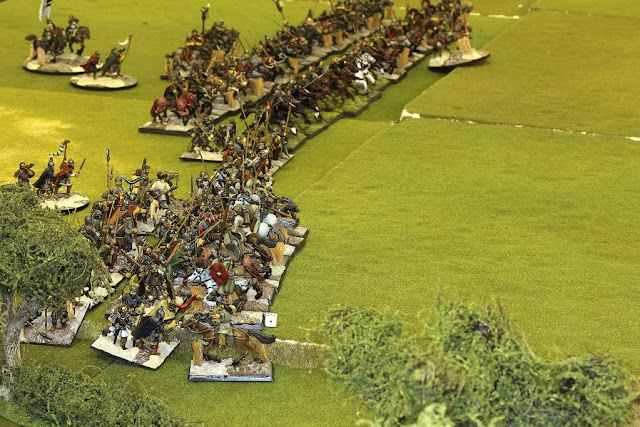 The warbands continued to advance. 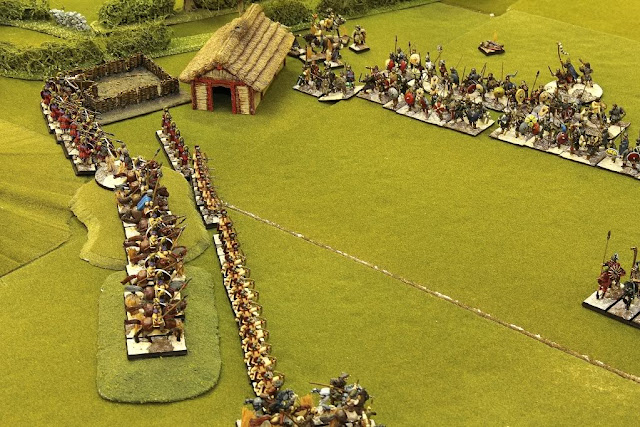 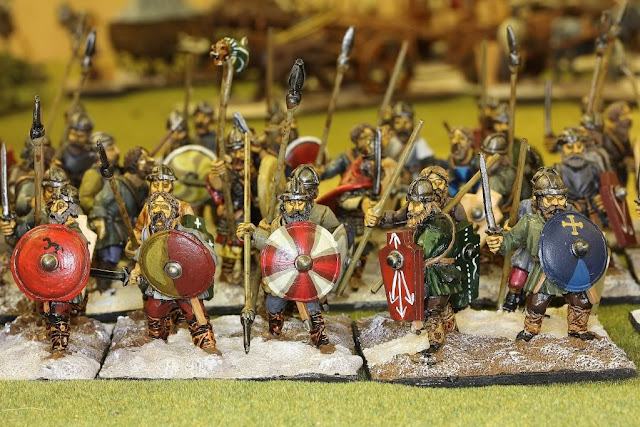 The Gothic cavalry were decimated by the bow armed Romans and their allies to their front and left flank. 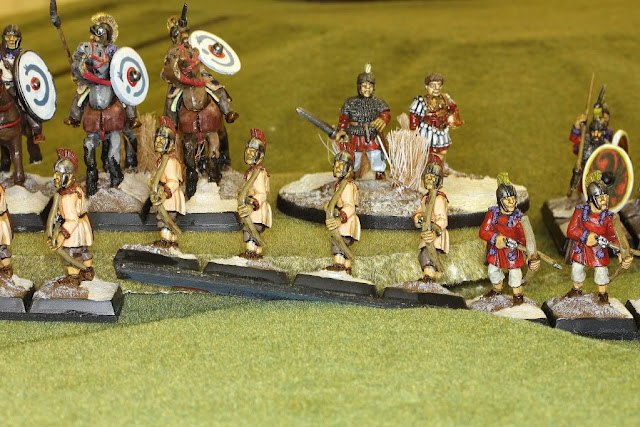 The Gothic armies were eventually driven off with great loss. Figures are nearly all Old Glory (common Andy you must owe me at least a pint for all the free publicity!) and some Gripping Beast.
Dave.
Posted by Dave Huntley (sheepman) at 13:51 4 comments: