The battle of Dunsburgh 460 AD

It's Fathers Day so I get to play with my toy soldiers, that's the rule!
So first outing with my newly re-based Sub Romans and Saxons using as always To the Strongest rules. Each army was about 170 points strong, the Saxons were, well infantry mostly with one skirmish unit in there but strong hefty lads with the shieldwall trait (+1 save against missile fire). The Sub Romans consisted of a decent first line of infantry with auxiliaries behind and flanks of cavalry and skirmishers. 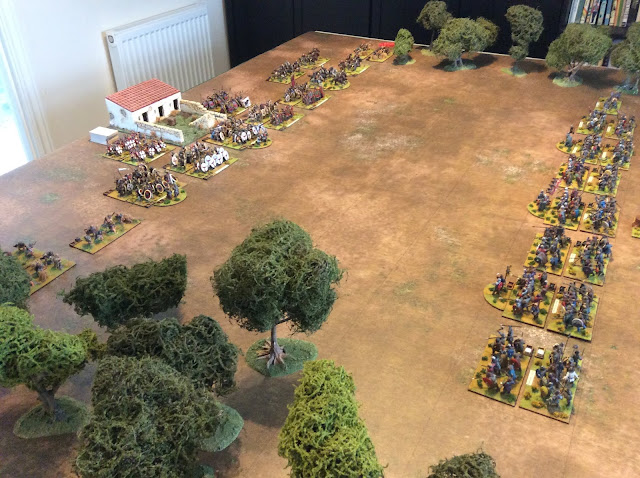 Sub Roman Britons on the left, Saxons on the right. 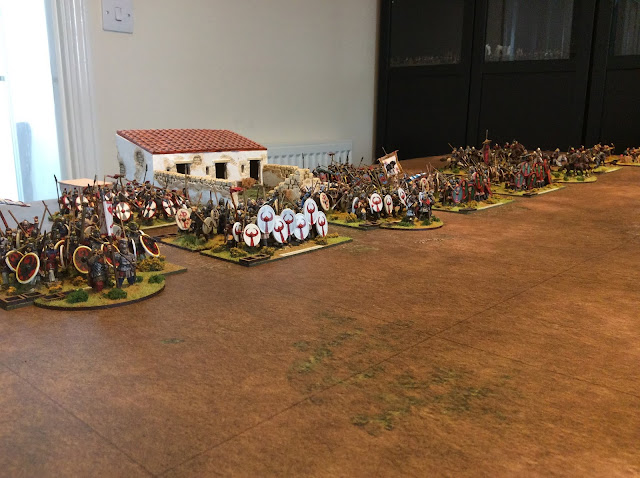 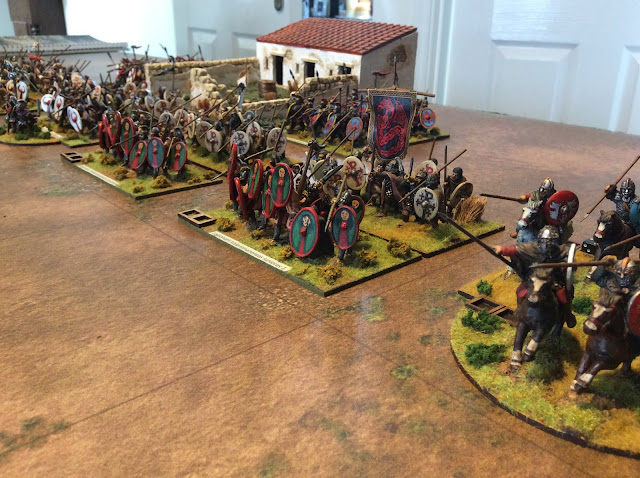 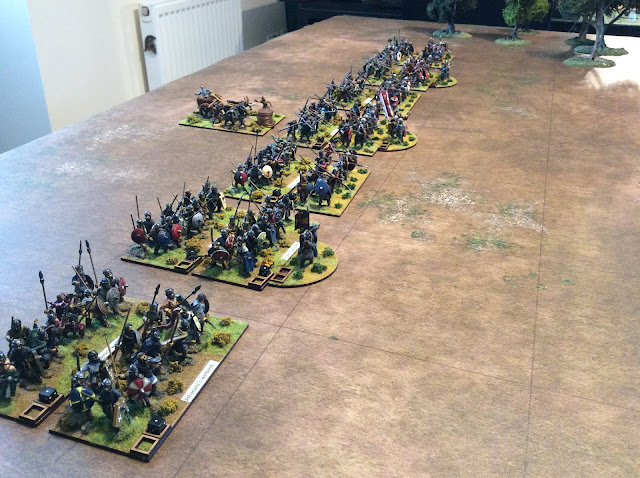 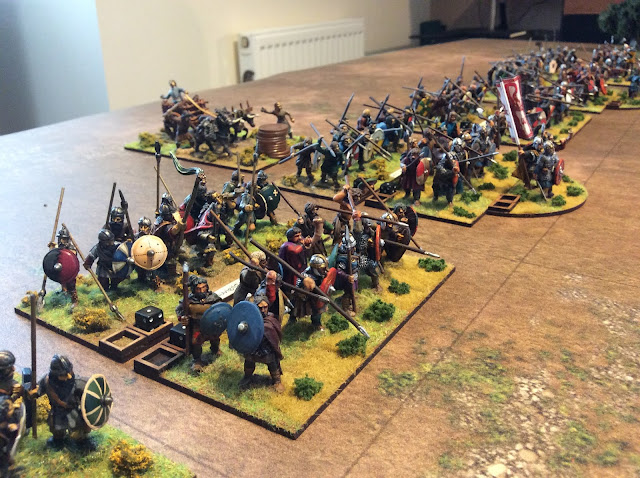 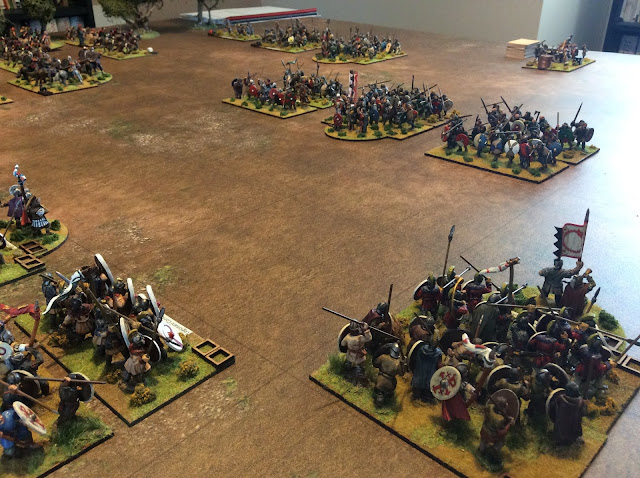 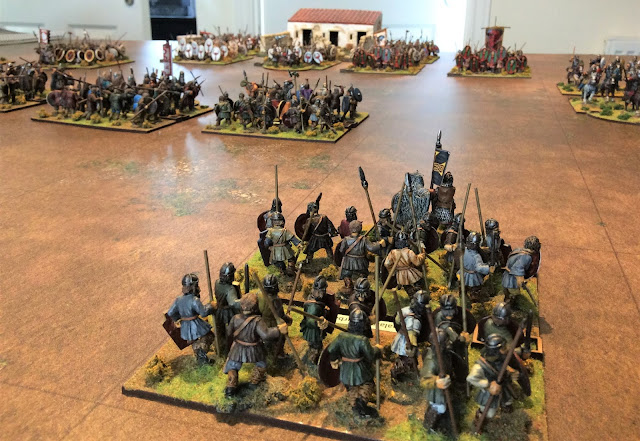 Turn one, the Saxon centre command immediately pushed forward with their flanks holding back, it wasn't meant to happen but two aces in a row buggered up any plan they had right from the start! 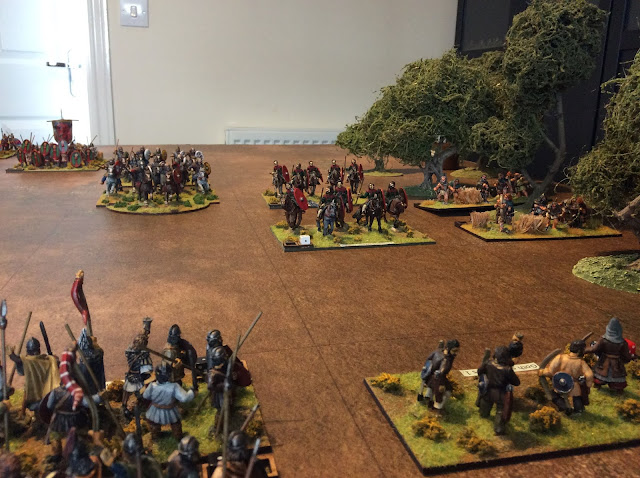 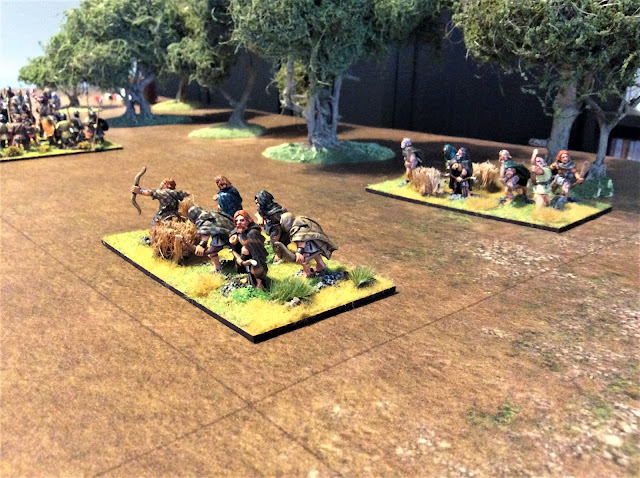 Taking advantage of a stupendous run of card turning the Britons eliminate the Saxon skirmishers, damage a Saxon warband and slip two of their own skirmish units past the Saxon right flank. 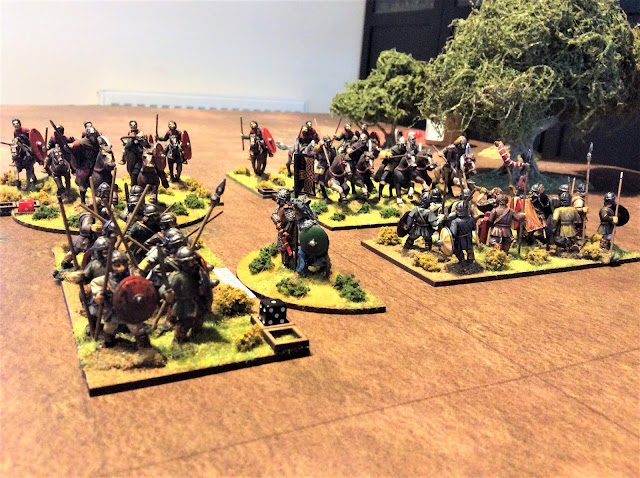 The right hand Saxon commander reacts to this by pressing forward, swinging his rear rank warband to the right and taking out one of the two enemy cavalry units, he now unfortunately sits there with his own flank exposed. 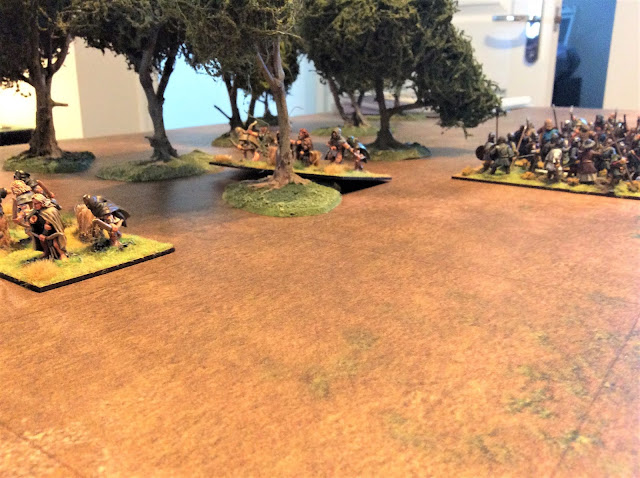 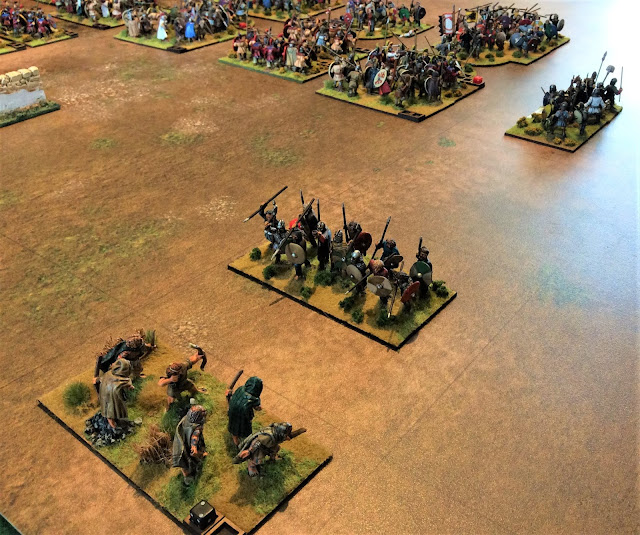 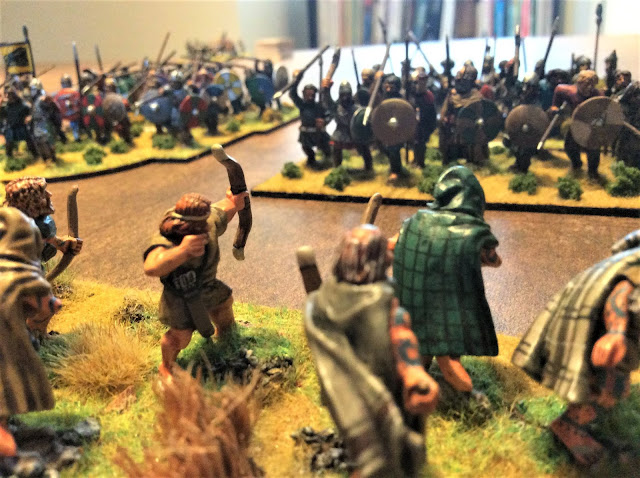 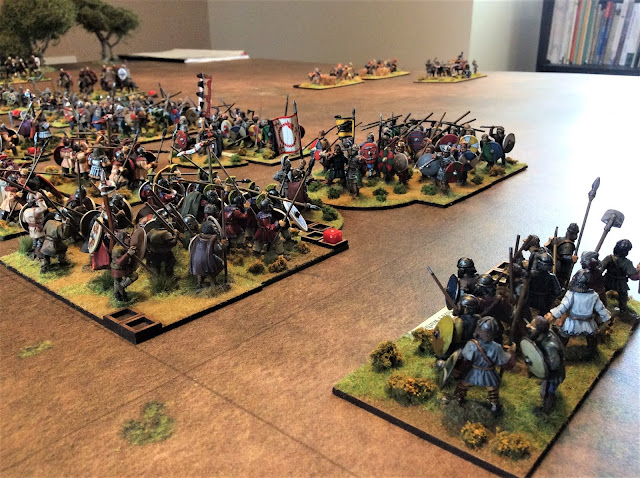 On the opposite flank the Saxon infantry push back the skirmish unit to their front and simply ignore the two in the woods to their left (the Britons couldn't pull the cards to turn and shoot). The rear Saxon unit has now turned to it's right to attack the centre of the Britons line but this took some time and events elsewhere were to prove decisive. 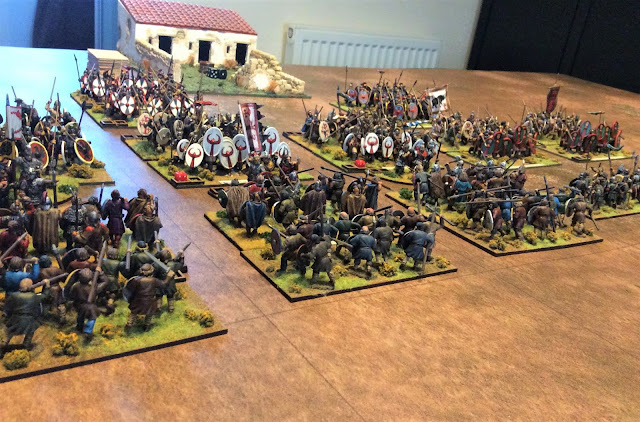 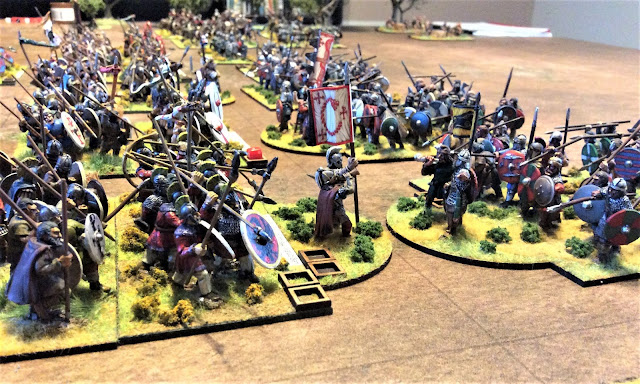 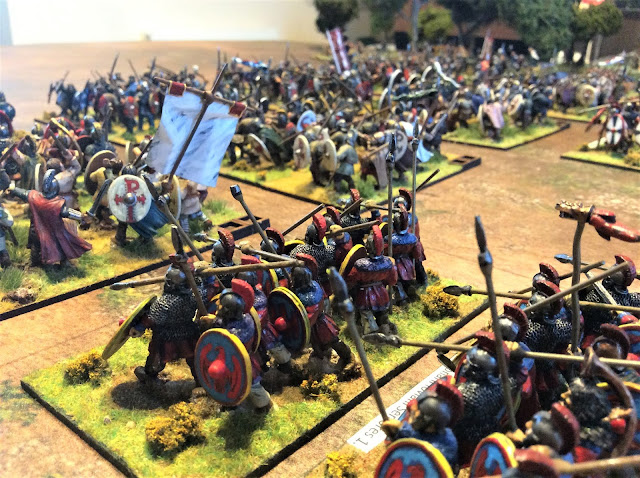 The centre of the lines slug it out, this proved to be a typical grinding match with red disruption die accumulating at an alarming rate and units coming forward to fill in gaps as they appeared. 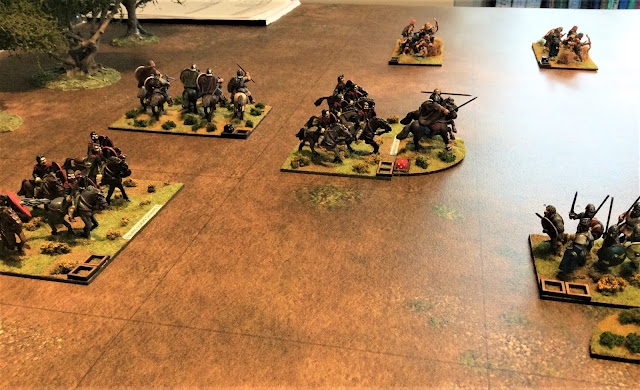 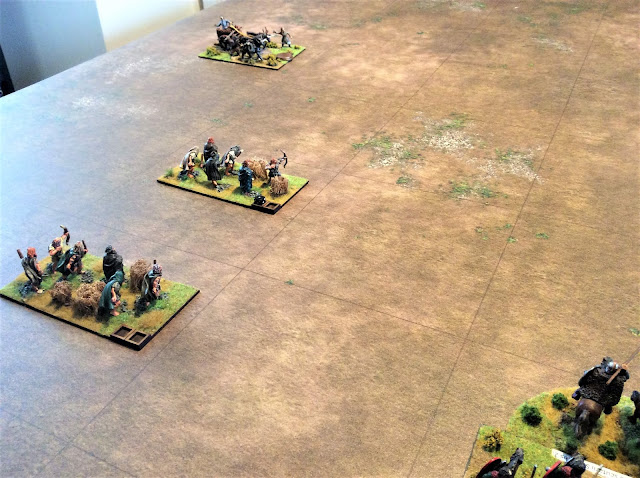 The Saxon right flank finally collapsed and the Briton's skirmishers headed off towards the enemy camp (if captured this would provide the Britons with three victory points). 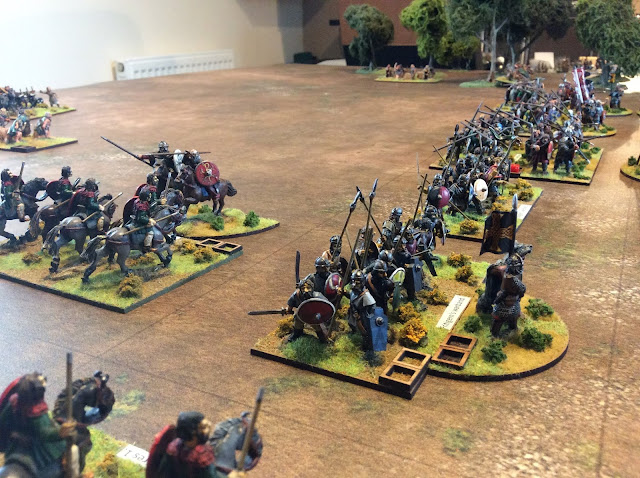 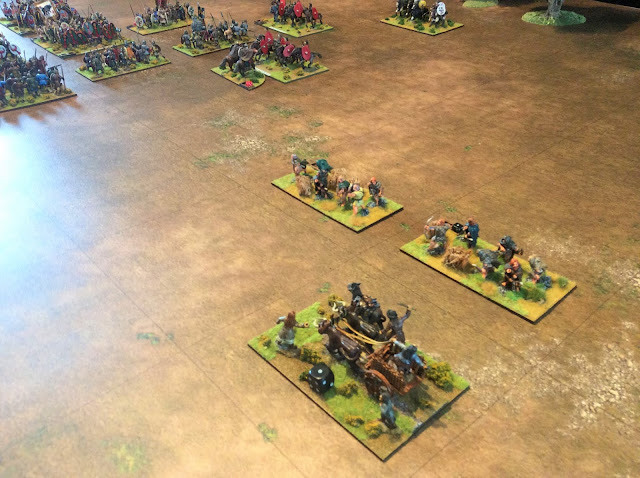 The Saxon line is completely flanked and the Britons skirmishers are about to capture the Saxon camp. The final token was lost when a Saxon warband in the centre was destroyed but the battle was won by the Britons with a fantastic run of cards destroying the Saxon right flank! 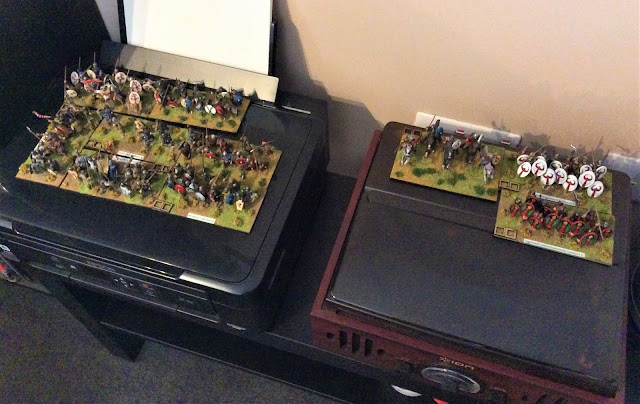 A pretty one sided casualty display, Saxon destroyed units on the left.
As always a great game from a great set of rules.
Cheers,
Dave.
Posted by Dave Huntley (sheepman) at 13:33 14 comments: