The final act, the desperate struggle reaches a climax. 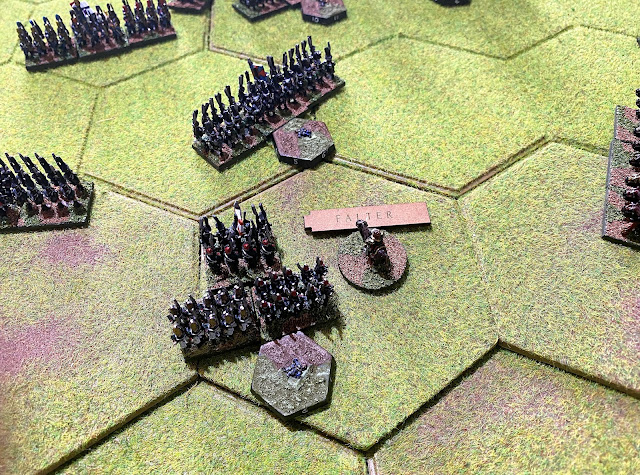 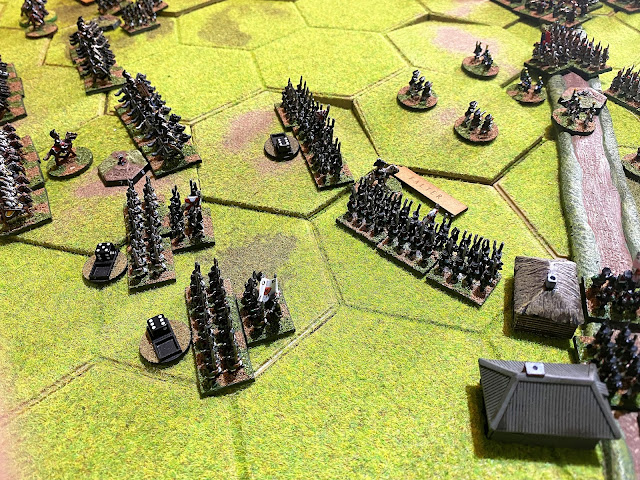 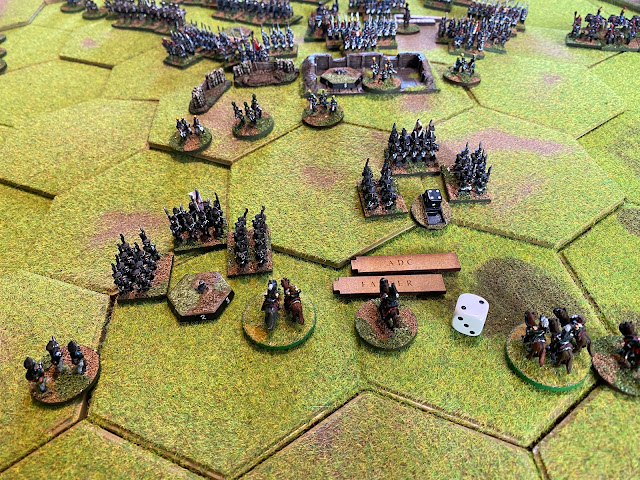 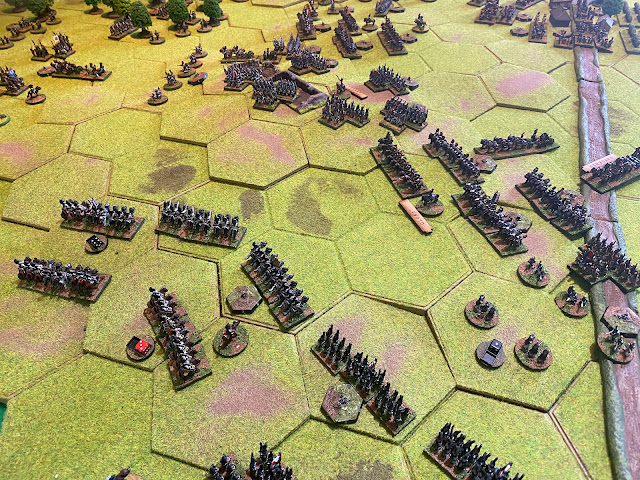 By twenty minutes past four in the afternoon after seven hours and twenty minutes of fighting (22 turns) though the French had finally forced a break through both sides were exhausted. Huge casualties had been suffered and as I was back to work next day I thought that this was an appropriate juncture to call it a day.

The Russians had three damaged cavalry brigades left to cover a withdrawal while the French, though in possession of the field having achieved their objective of taking the redoubt and clearing the road would have been too fatigued to pursue too hard, especially as their cavalry had been roughed up as well.

I have wanted to fight a battle on this scale for a good while now and the completion of this 10mm collection allowed me to do it at my own pace during my two week holiday. Fighting both sides was fine but photographing and writing it up for this blog made it a bit of work but work which I have enjoyed. I may have over egged the pudding as they say in how in depth the report was but as I have said in the past I do this sort of write up so that in my more senior years I may have something to look back on!

General De Armee is a great set of rules with which to fight a battle with on this scale, if I had a criticism then it would be that I feel sometimes brigades in a force are able to do things all at once most of the time. I know a 'Hesitant' brigade result restricts things but I still was able to push forward two divisions towards the Russians for most of the time. Some way of being forced to hold a brigade or two back would be better.

The other thing is that the charge, melee system and skirmish are a bit clunky, when written this set of rules was the best thing I had found that IMO represented Napoleonic warfare up to that point in time. I believe David Brown is working through improvements in those systems and hopefully will publish a second version of the rules.

The rule set Soldiers of Napoleon is really good for a couple of brigades each (and handles skirmishers particularly well) but would not manage a battle of the size I have just covered.

Many thanks to those of you dedicated enough to have ploughed through all of my ramblings, goodness knows what I will do next but for now I'm off to lay down!

After four hrs of fighting both sides are exhausted, having suffered great loss, there is still an opportunity for a French breakthrough on their left centre and artillery is in place to attrite the Russians. 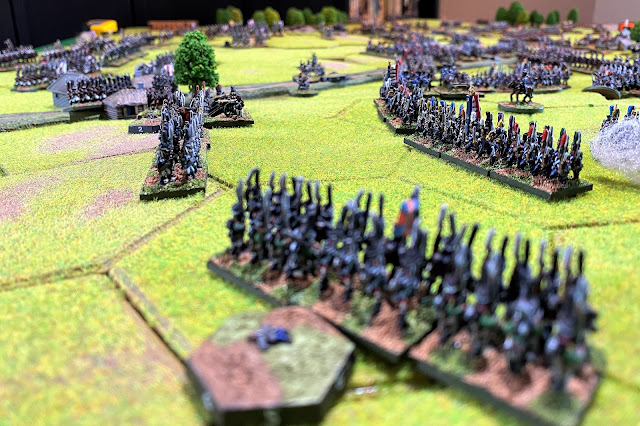 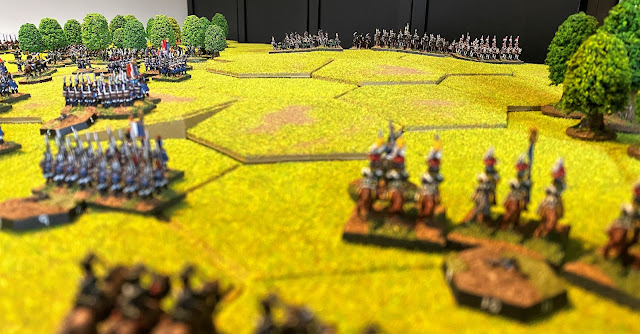 With Vasserott's brigade assault on the Russian redoubt repulsed Davout ordered the French heavy cavalry to move forward and break the Russian lines. In particular the Russian heavy reserve cavalry brigade had to be forced back to allow the French infantry to continue the attack.

The next couple of hours should decide the issue.
Dave.

The first French assault on the redoubt: 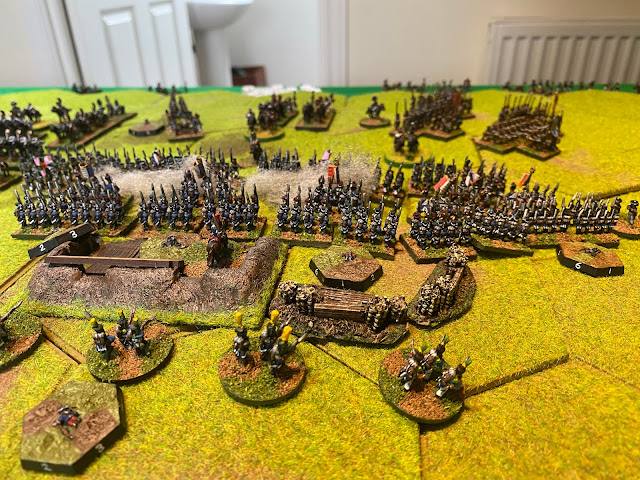 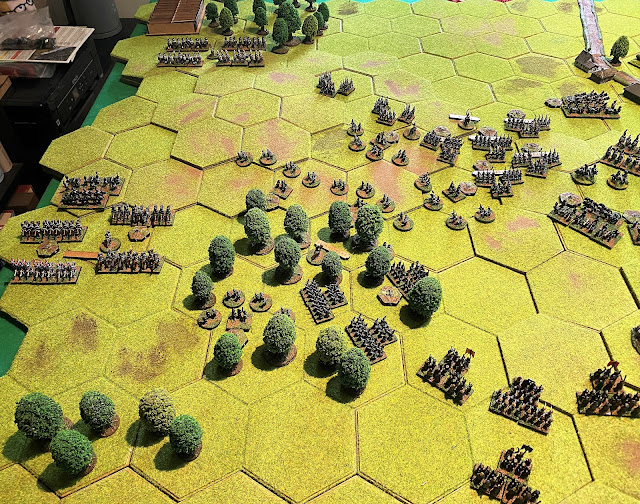 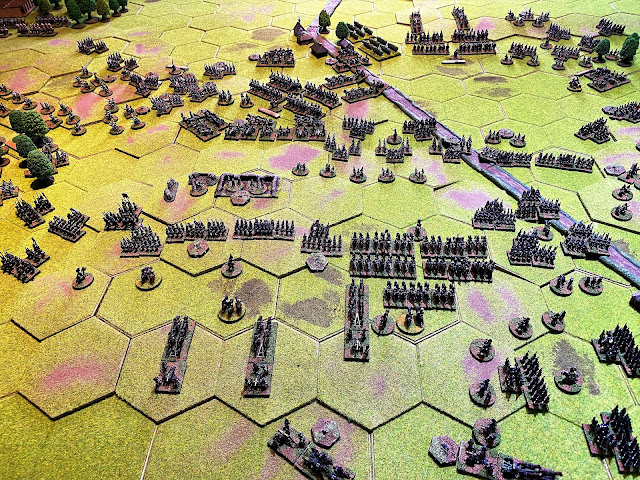 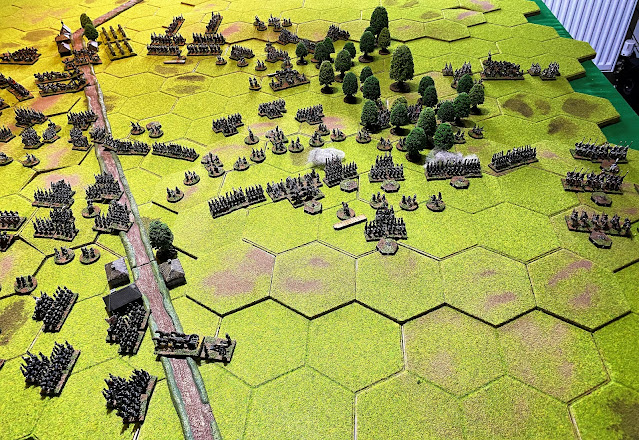 Above, the field of battle on turn eight, mid day.