As the title suggests and as stated in previous posts, due to Photobucket's brilliant business decision to charge bloggers money for republishing/posting or whatever you want to call it on third party sites I have for quite a while been busy re-posting all of the photographs which I had stored on my hard drive back onto this blog cause I won't bow to blackmail.
I know, it's their site where I put the pictures, it's their decision to charge and ultimately I should have just posted them onto the blog direct from my hard drive and saved a lot of work but I didn't, mainly as I didn't see this coming but what the hey.
Anyhow all pictures have now been re-posted and if you dear reader wish to peruse all the older posts by clicking on the headings under the large title picture of Napoleon on the front page then they now all have pretty pictures to go with them. Jolly good and as the title says, 'Up yours Photobucket'.
Dave.
Posted by Dave Huntley (sheepman) at 05:56 7 comments:

I am in the very fortunate position of having a wargame room all to myself, the main advantage of this (other than for my wife who gets rid of me up there) is that Neal and I can play through a game at our own leisure, taking our time and avoiding the wargamers curse of 'hey it's the last 1/2 hour lets throw everything in' syndrome.
So with that in mind we decided on having a typical peninsular war corps level game using the fantastic General D'Armee rules by David Brown. This took place over a four week period (we can only manage to get together for about two hours per week) and both of us made a point of following the tactics employed by both protagonists as we understand them and thereby testing the authenticity of the rules fully.
As can be seen below the British commanded by Neal set up with the Light Division (2 brigades, four battalions in each) at the bottom of the picture below the road with the first brigade occupying the village and field and the second in reserve.
A second Division can be seen just behind the crest of the ridge with it's 2nd brigade again in reserve behind and a cavalry division to the top of the picture guarding the left flank of the corps. 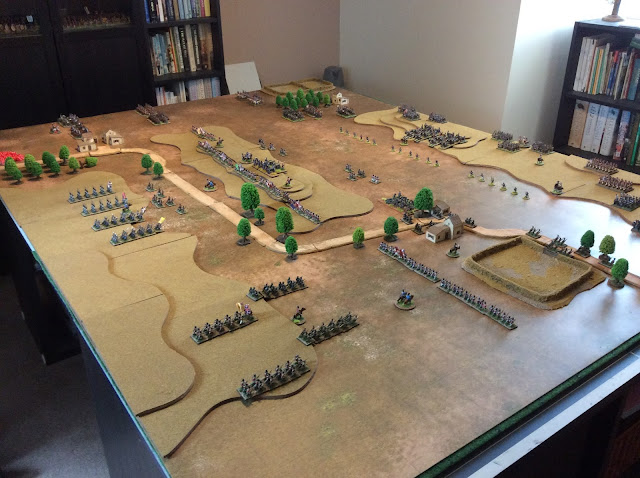 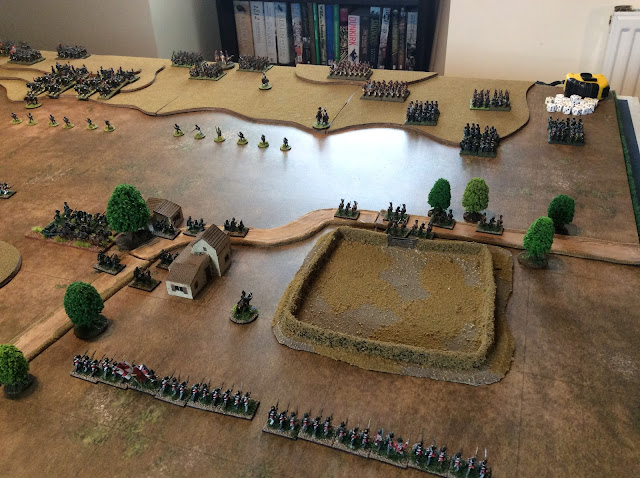 Second Division's 1st Brigade just behind the crest of the ridge with composite light battalions and artillery to the front: 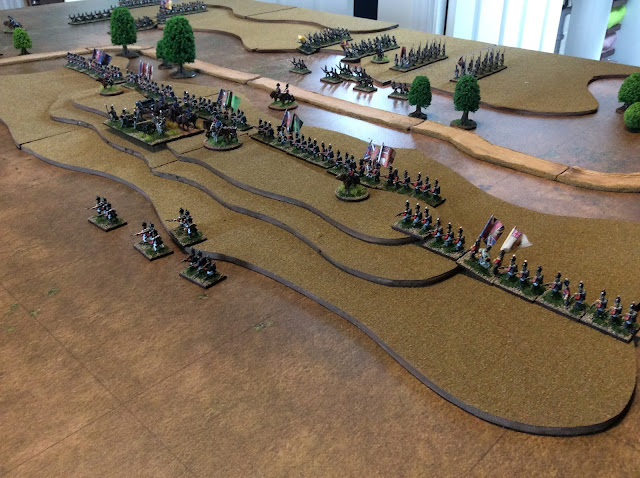 The British cavalry Division, British Dragoons to the front and Spanish in the second line faced by their French counterparts: 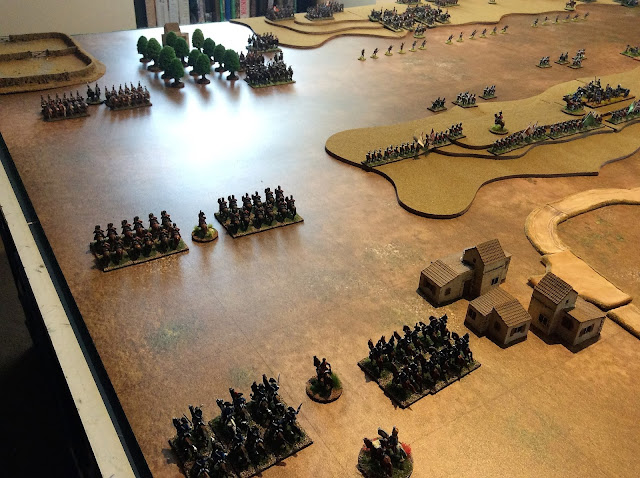 Looking again at the top photo the reader will see the French with one infantry Division opposite each of the two British, the artillery combined into a two battery brigade in the centre cavalry on their right wing and one veteran Brigade off table in reserve.
Neal's plan, I suspect was to cling to the ridge like a limpet while protecting both his flanks. Mine as the French had to be to distract the strong British Light Division on my left with a limited attack, clear the British artillery and skirmishers from my front, weaken his centre and punch through. There only British after all!

The diversionary attack on the British right went in with the French driving the Portuguese and 95th light infantry out of their positions forcing the British artillery away and occupying the village on that flank, so far so good but the French Division had suffered heavy casualties in doing so. 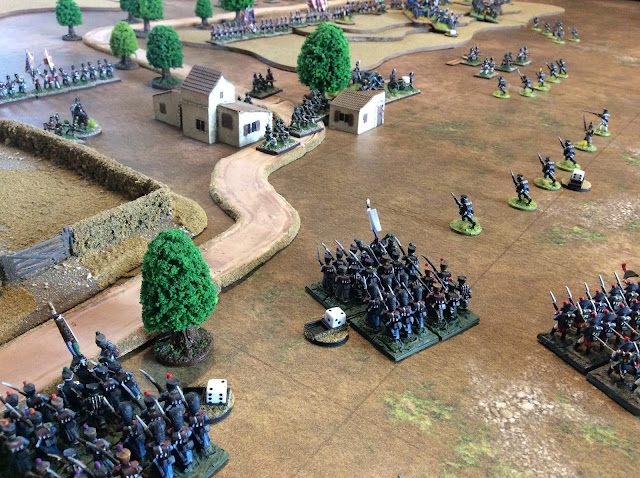 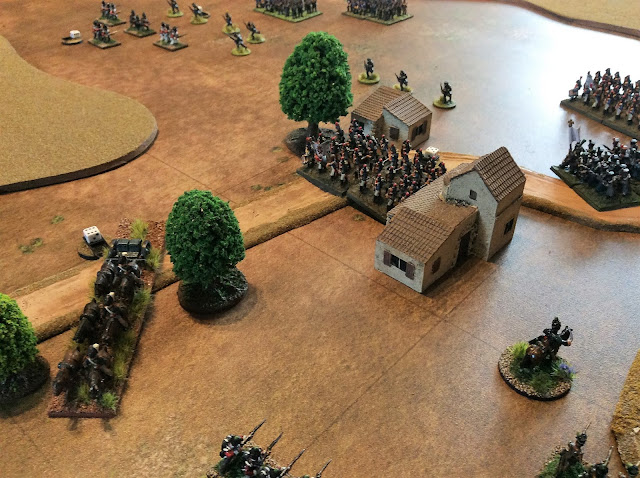 As the French cavalry moved forward to confront their British opponents they noticed that a British light infantry battalion had strayed too far forward in an attempt to engage the advancing French artillery. The sudden charge caught the lights at the end of their evade move and destroyed them completely. The end of the charge: 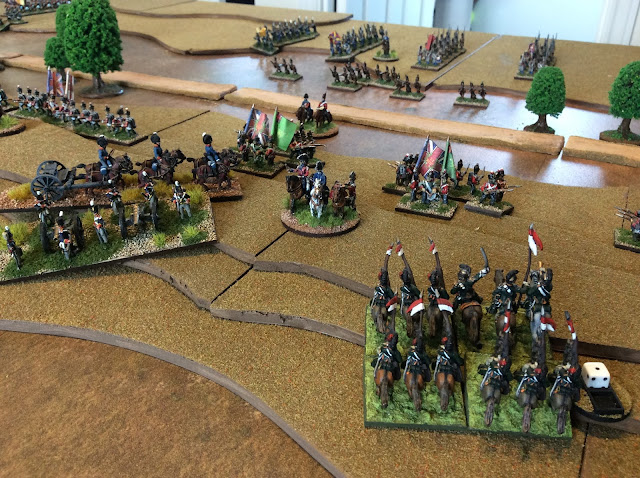 No photo of this but revenge was sweet for Neal as with two very good throws of the dice one French battalion retreated off the table hit by artillery while the lancers supports were hit by the artillery battery above.

The rest of the cavalry of both sides clashed after the British dragoons moved forward allowing the French light cavalry to charge, normally I wouldn't of touched British heavies with a barge pole but I had one extra brigade in reserve and boy did it pay off. Neal threw the crappiest dice ever and off went the dragoons first in retreat then with a terrible Brigade Falter roll they dispersed. Oh dear, how sad, never mind! On into the Spanish went the French. 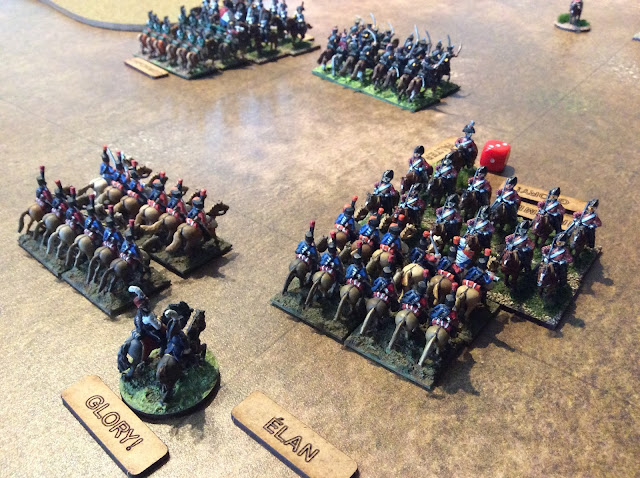 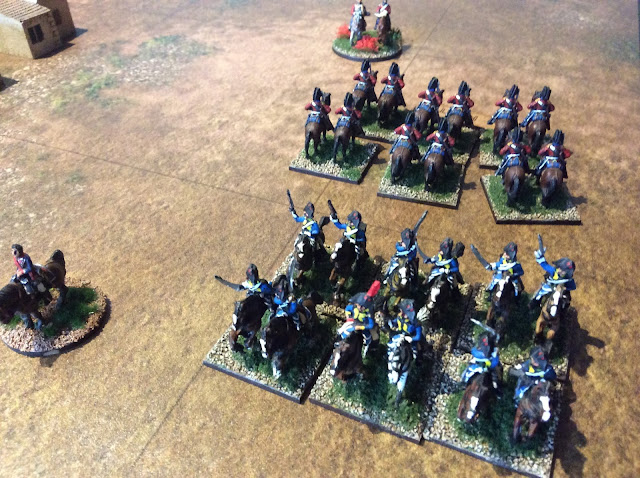 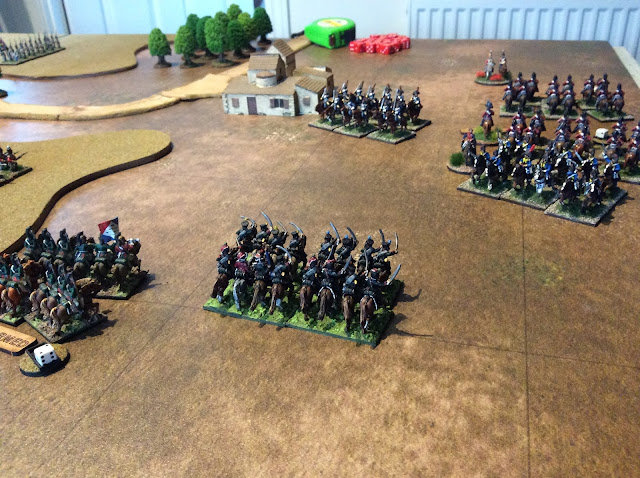 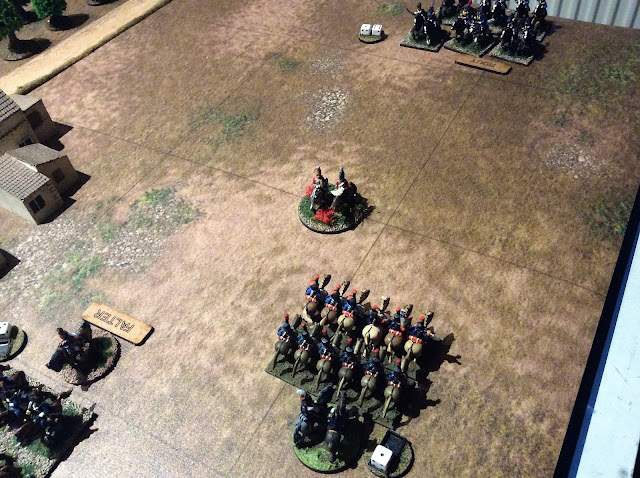 With the allied cavalry dispersed or pinned back some of the French cavalry could now threaten the British infantry in the centre. 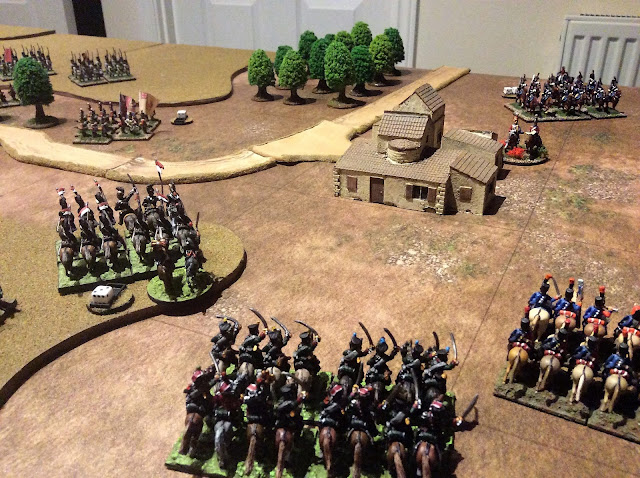 Meanwhile on the British right the diversionary attach against the Light Division was grinding to a halt, the French were simply being thrashed by British volley fire. The casualties were mounting and things were looking decidedly dodgy! 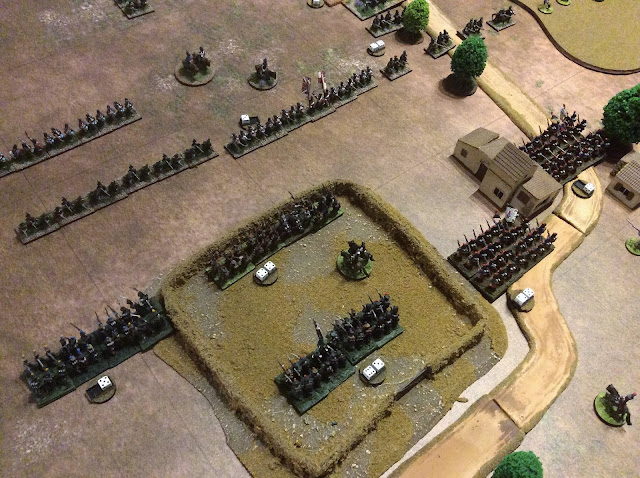 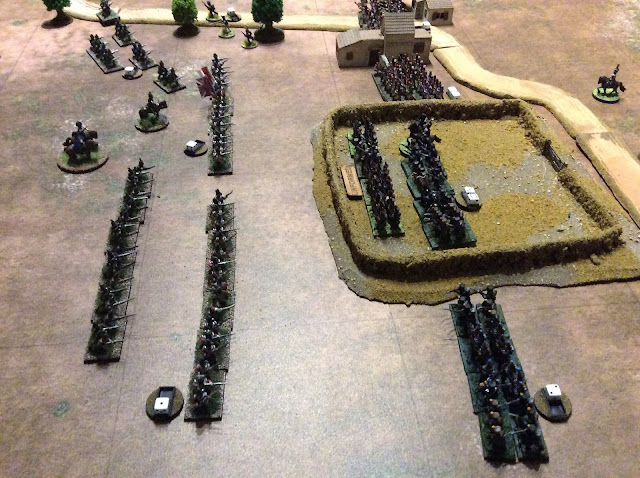 In the centre the French reserve Brigade of veteran light infantry advanced to the right hand end of the British held ridge, their cavalry had driven off their opposing counterparts and the time had now come to push round the flank.
Neal however had other plans, the cleaver sod having won the initiative before I was within charge distance swung his two small British battalions to face the oncoming French and poured in a devastating volley stopping the French in their tracks. 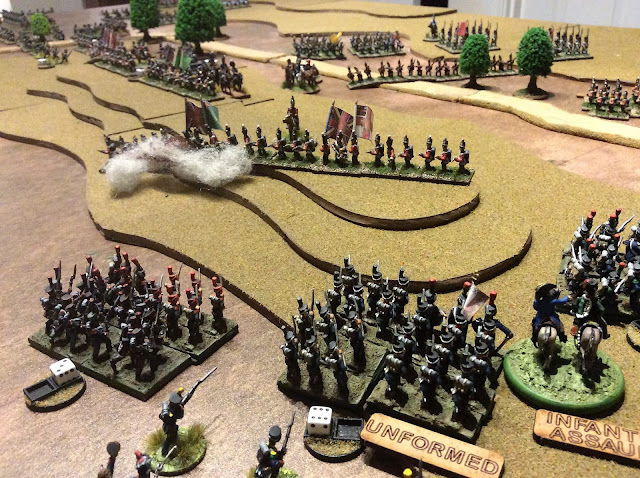 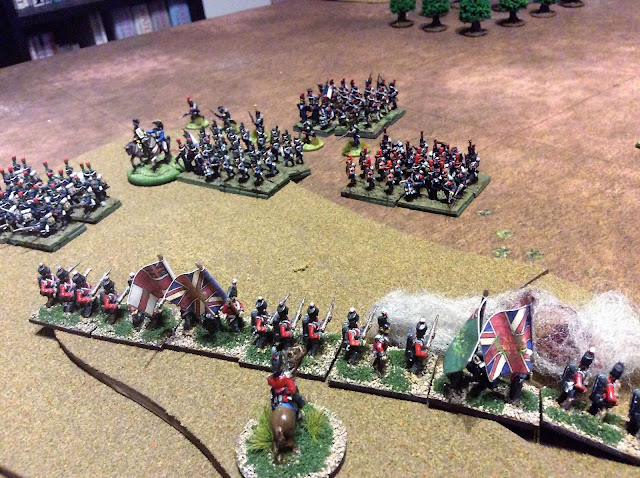 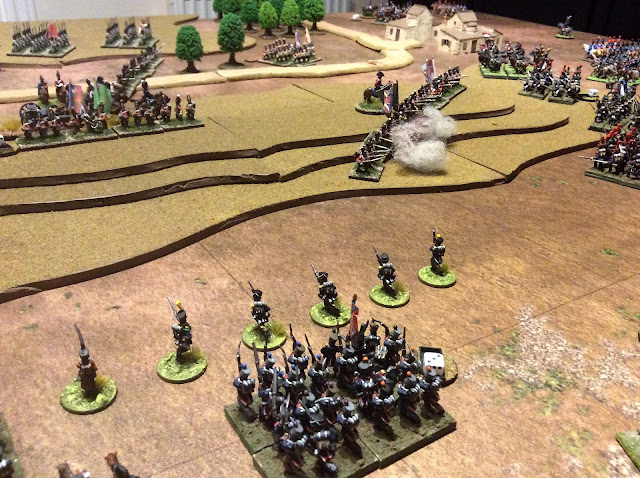 My only compensation was that a British battalion on the extreme left of his line was caught in square when hit by a French column and retreated ready to be eaten up by the victorious French cavalry. 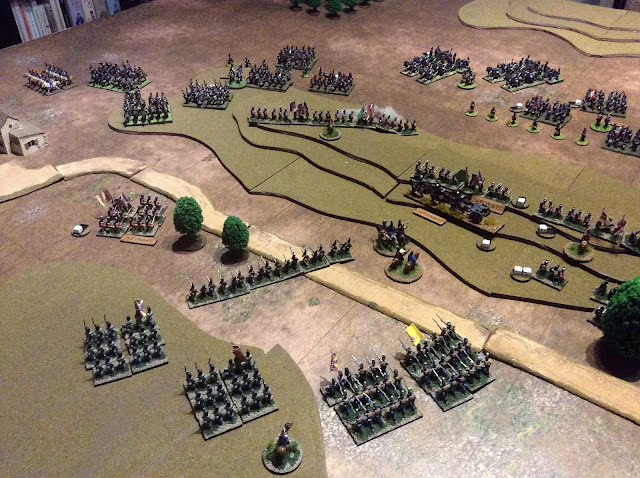 As can be seen above the time was right for the exposed two battalions to be crushed and more importantly the retreating British battalion to the left of the picture to be charged by the French lancers who would then cut through the Portuguese reserve brigade coming up to shore up the flank.
In the command phase the lancer brigade commander was allocated a 'Glory' marker and a re-roll marker, great, roll a 3,4,5 or 6 and off they go into the infantry. Roll a 2, no matter they have the re-roll, well dear reader you just know what's coming, yep another sodding 2. Hesitant - no charge and Neal pissing himself.
The infantry attack still went in and routed the British brigade but those dam Portugese were still there. 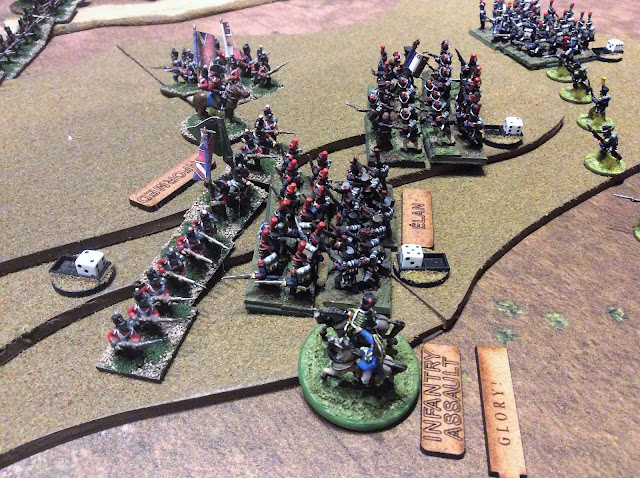 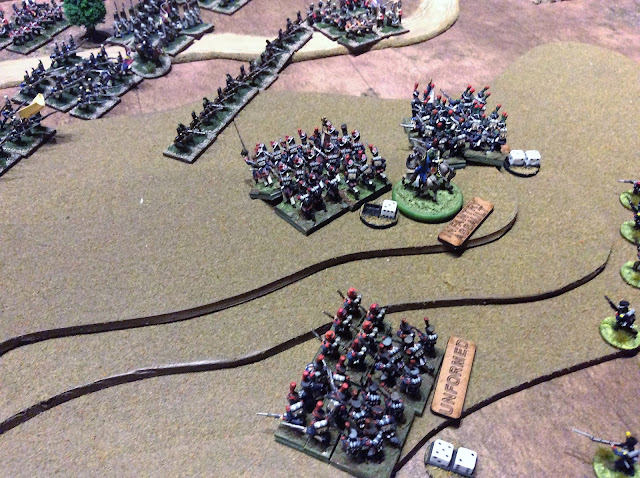 Back on the British left the Light Brigade was very close to breaking their French opponents and hadn't even committed their reserve brigade, the photo below shows casualties at nines and tens with twelve their dispersal value, not good. 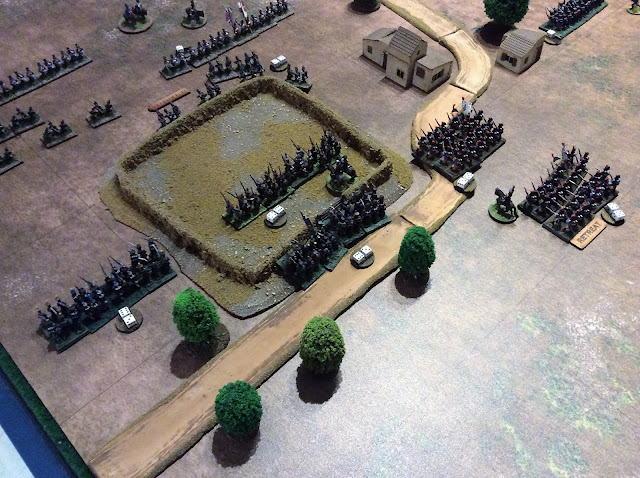 The end was nigh for the French, their right crumbling, their right stalled, it had to be the centre. The British had done what the had successfully done throughout the campaign and sat behind the ridge. Though my artillery had performed particularly badly the simply hadn't been able to touch the main British line while both sides skirmishers had nullified each other. Therefore my central French infantry attack had to go in to a fairly fresh British main line of battle. The result was predictable: 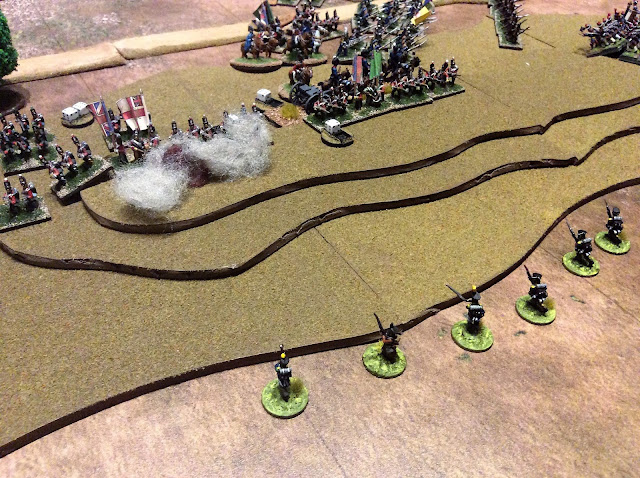 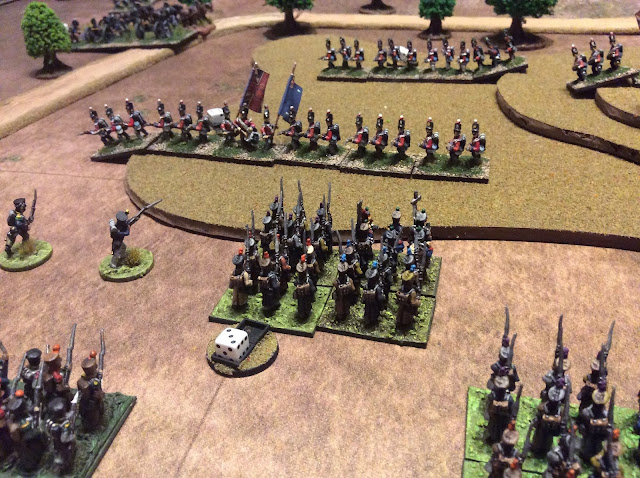 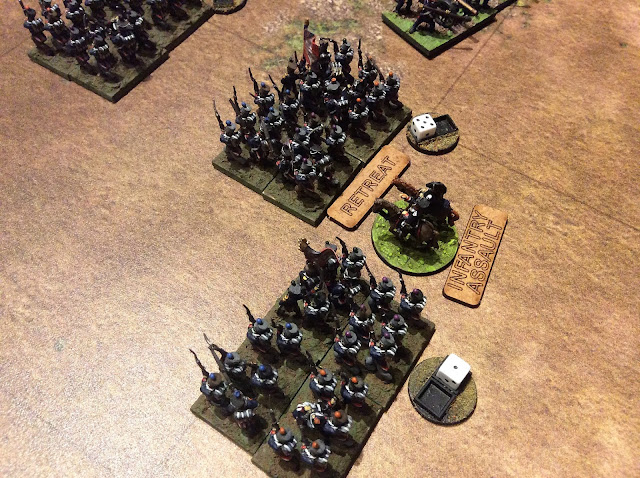 The game was reviewed at this point. A strong French push to uncover the British position had been comfortably repulsed at heavy cost to the French though the British force would be unable to exploit the situation without it's cavalry. The British could either hold the position and await reinforcements or withdraw behind the Light division rearguard. The French must withdraw to lick their wounds. 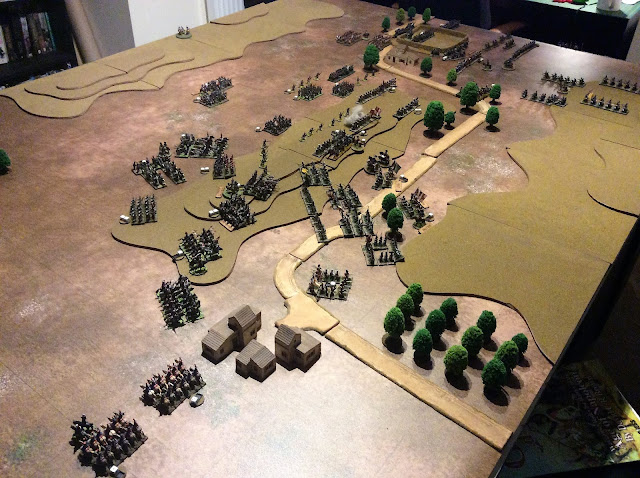 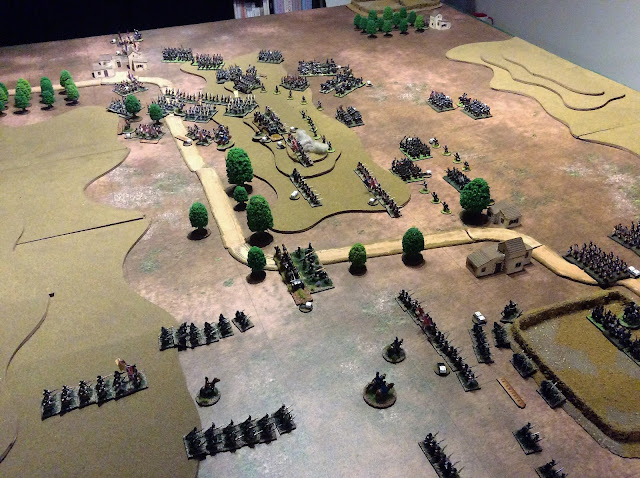 A great game, Neal said it was the most realistic portrayal of the period that he had played so that's something cause goodness knows we have tried every set of rules going to get it to feel right.
Good stuff. See ya,
Dave.
Posted by Dave Huntley (sheepman) at 07:13 11 comments: