It's been ages since I have done anything with these two armies but as I fancied a change of scale I thought 10mm will do for me.
Followers will know that I have a fairly substantial collection of allied and French based on the attack on Blenheim OOB but there is still quite a few units to go to complete the units present on this side of the battlefield so I got em out, cleaned them up an as you will see they turned out ok. 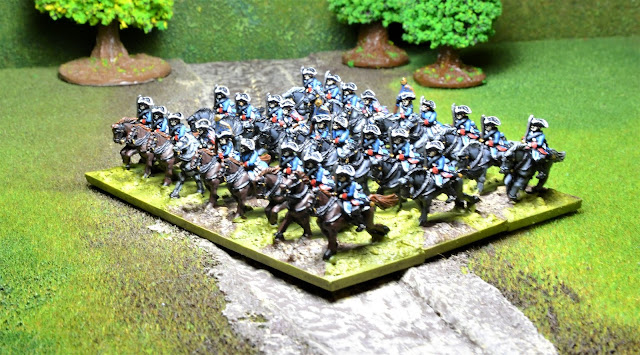 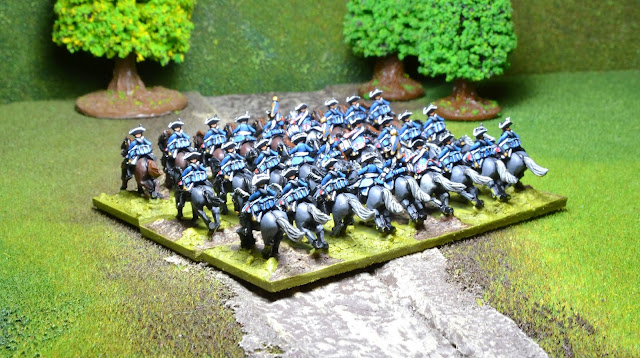 The figures are Old Glory 10mm and are actually dragoons, hence the flags are the wrong shape. I should have squared them off with a bit of green stuff when I prepped the figures but I only thought of that after! Also as usual I used a blue one shade lighter than I would have normally as they are 10mm and I feel that from god height they stand out better but that's a personal choice.
There are more French cavalry and infantry to do, and some French dragoons to re-base as I cocked up the size of the bases years ago, so a little to be getting on with.
As to which rules, Neal and I used these figures with Black Powder a long time back but I'm afraid I'm not a fan so I thought I'd try adapting To the Strongest, we have used these rules (which we really like) for Thirty Years War and they worked well. Now I do think that WSS is the farthest you could stretch this rule system to but it's worth a try. I might contact Simon Miller who wrote the rules and see what he thinks.
So out with the magnifying glass and on we go!
Dave.
Posted by Dave Huntley (sheepman) at 12:26 19 comments: