To The Strongest, 15mm Greek

Neal and I have been playtesting Simon Millers To The Strongest rules over the last month or so (find Simon's blog The Big Red Bat Cave Here) always up to now on the grid system he recommends. These rules are fantastic, and believe me I don't give such praise easily I am very choosy in the rules that I can be bothered to spend my time learning - I am one lazy sod that way!
After my construction of my hex table Here we decided to adapt the rules to hex based play, frankly they didn't need much adaptation. Simon says in his introduction to the ruleset that he disregarded the idea of using hexes for movement as he thought the hexes would allow too much manoeuvring for units in the ancient period which he was trying to avoid but we didn't find this at all. The units faced the point of the hex as can be seen here: 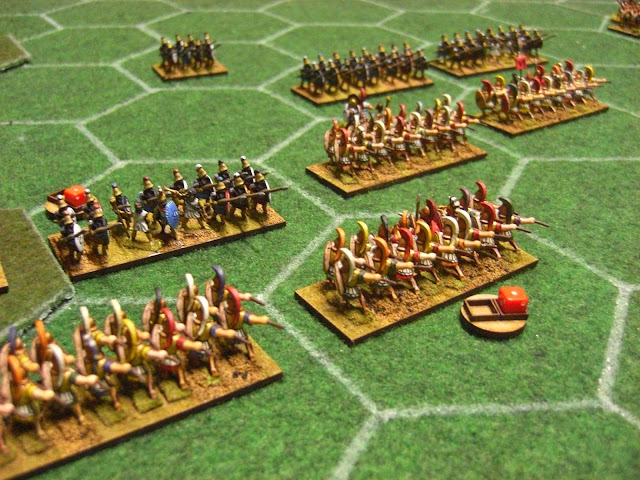 The units attack to the front two hexes, flank attacks to the side, rear attacks to the hexes to the back. If a unit wishes to change facing then this is classed as a difficult move and if successful the unit is moved to face the point of the hex to the left or right. The rules cover the all of the ancient period, Simon is I believe looking to extend up to the Thirty Years War and Neal and I will be playtesting Neal's adaptations at his place next week.
I won't go into the details of how the rules work but do have a look on Simon's blog http://bigredbat.blogspot.co.uk/ for how to play. As I say I couldn't recommend them more, each game is finely balanced and as I said in another comment on the rules elsewhere, at our Border Rievers Club swearing is compulsory but there is considerably more than usual when playing with this set of rules, all in the best possible taste of course.
Enough for now but I will post pictures of the full game in due course.
Dave.
Posted by Dave Huntley (sheepman) at 02:34