Unfortunately I haven't bee able to post for a while as my son has been quite unwell reciently and as we all know life has an unfortunate tendency to get in the way of our hobby now and then, he is hopefully starting on the road to recovery so fingers crossed.
I thought I would post on a new topic, this time something local to myself, in fact just 20 miles up the road at Otterburn in Northumberland. The battle took place on the 5th August 1388 between the Scottish force of James Douglas and the English force of Henry 'Hotspur' Percy Wikipedia link here is a link to photographs of the battlefield northumberland-cam
This is a copy of the information taken from the UK Battlefields Resourse Centre:
Percy’s forces arrived at Otterburn in the evening of 5th August 1388 footsore and weary after a day’s march of some 30 miles in hot summer weather. The unsuspecting Scots had settled down for the evening, the nobles, having donned loose gowns in the heat, ‘for the hete tuk on syd gownys’ prepared to attend to no more than their evening meal. The arrival of a scout with the news that the enemy was upon them caused disorder and panic as they rushed to arm themselves; the Earl of Moray forgetting his basinet (helmet) in the confusion.
Percy was not so hot-headed that he rushed into combat without consideration. Assessing the Scottish position, Percy sent a detachment under Thomas Umfraville (although sources dispute who led the flanking movement) to swing around the Scottish positions and attack the camp from the rear. Percy, meanwhile, launched a direct attack on the Scottish main force. Fierce and bloody battle ensued under moonlight along a ridge stretching from the River Rede in the south up to the slopes where the Percy Cross now stands. The English initially made headway but it was at this point that Douglas made his planned counter-attack; for although the Scottish commander had been caught unawares by Percy’s unexpected arrival he had, nethertheless, made plans as to how to tackle the English forces once they did arrive. An unexpected night-time battle did not alter his plans, indeed the cover of night probably assisted his manoeuvres. Douglas led a detachment in a wide arc on his left, charging down the slope to attack Percy’s right flank.
Douglas’ and Umfraville’s flanking movements were on the same side of the battle i.e. the Scottish left and the English right. Umfraville could not have advanced on the Scottish right due to the extensive boggy land in that direction; which was no doubt deliberately chosen by Douglas for that purpose. But by some chance the two flanking detachments missed each other; one swinging wide of the other, and each arrived unhindered to their destination. Umfraville found an almost deserted camp and quickly took control. After waiting for some time, although what for is unclear, he left a small guard on the camp and advanced towards the sounds of battle.
Douglas’ flanking attack was ultimately successful, for although fierce hand-to hand fighting continued for some hours the English were gradually forced into a tighter and tighter section of the field. Unable to use their longbows, tired and hungry, the physical superiority of the rested and fed Scots began to tell. Douglas was fatally wounded but his condition was hidden lest it give dismay to his own troops and courage to his enemies. During the course of the night Henry Percy and his brother Ralph, along with other English nobles, were captured and in the light of morning the Scots held the field.
Here are pictures of some of the 28mm figures (mainly Old Glory) that I have for this battle: 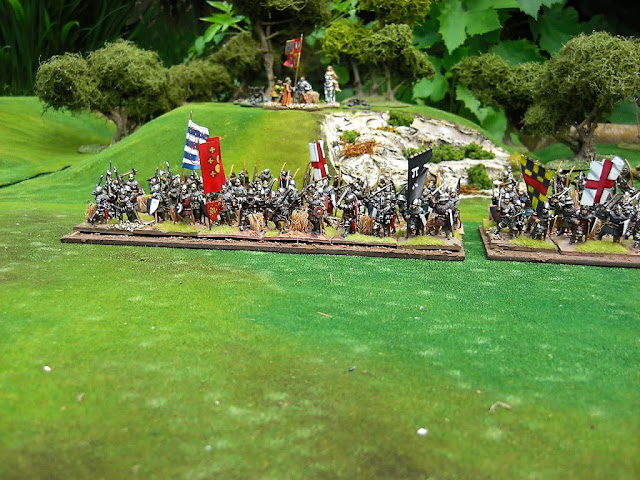 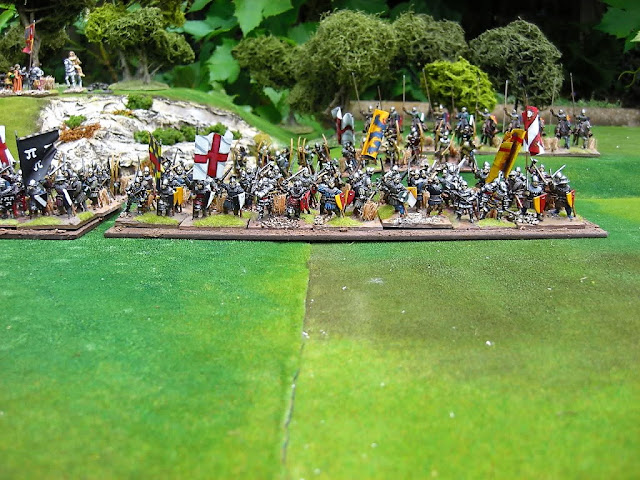 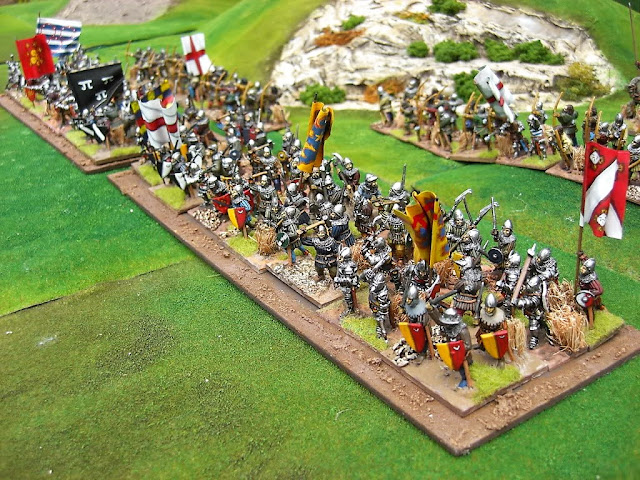 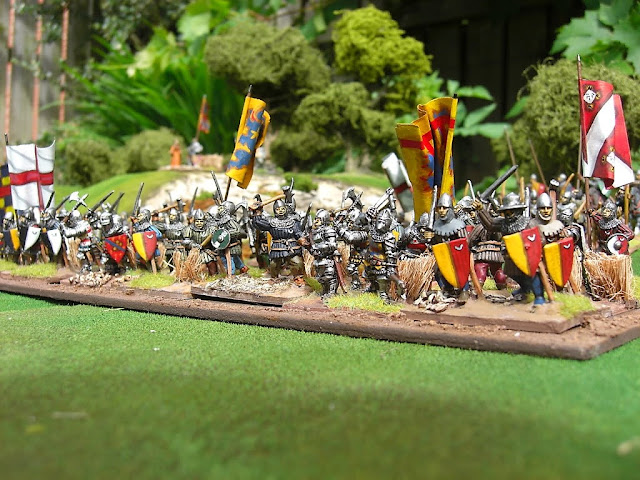 English Hopilars and some archers, neither of which took part in the engagement as they were left behind in Hotspurs rush to engage the Scotts. 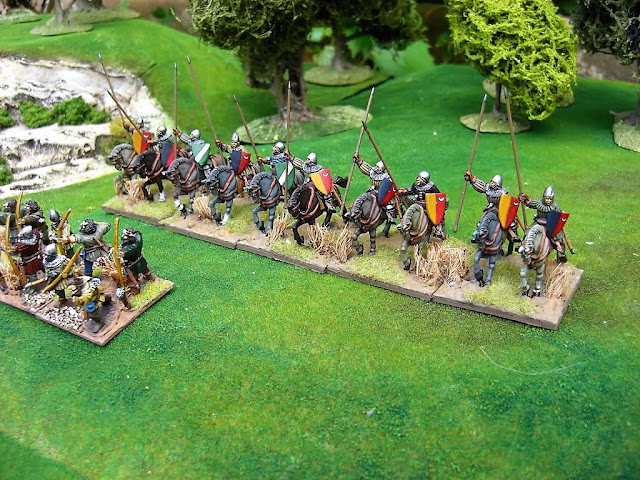 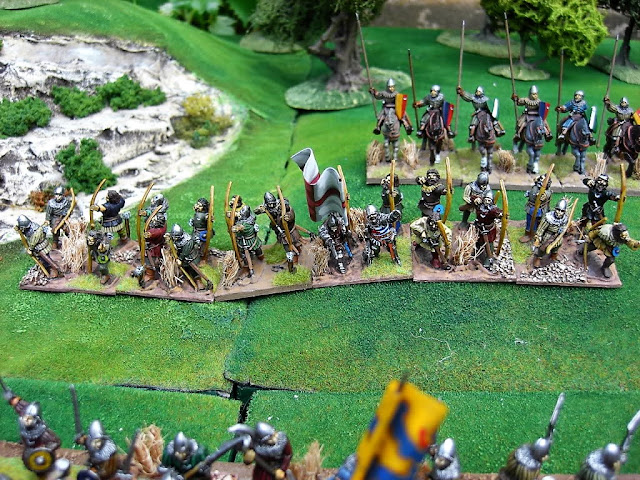 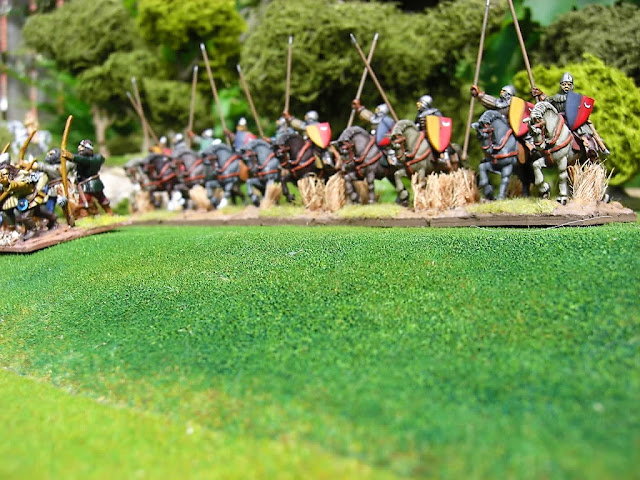 Another view of the English 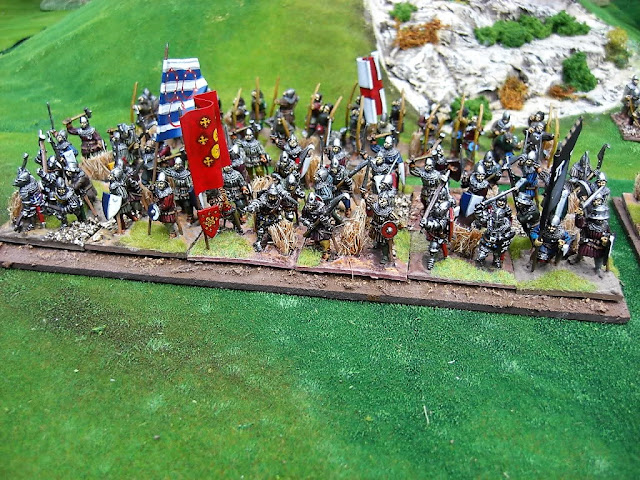 And the Scotts with Sir William Lindsay's banner to the fore 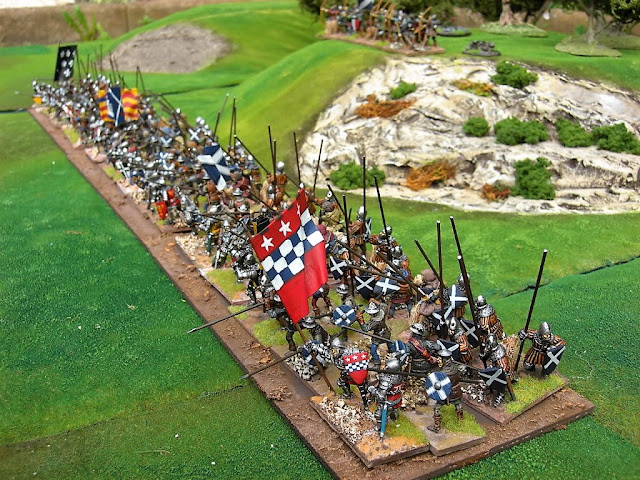 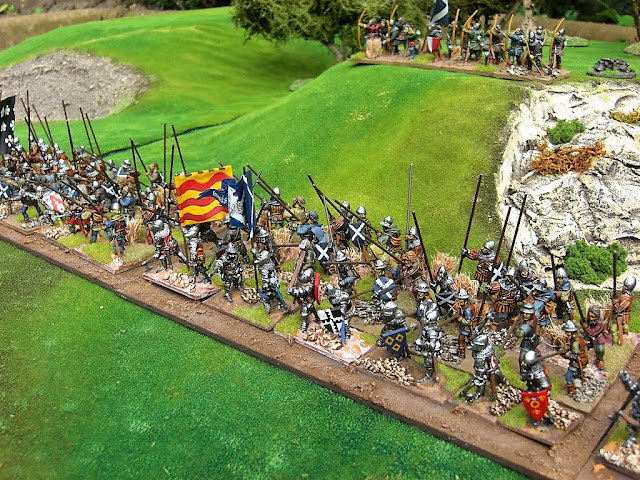 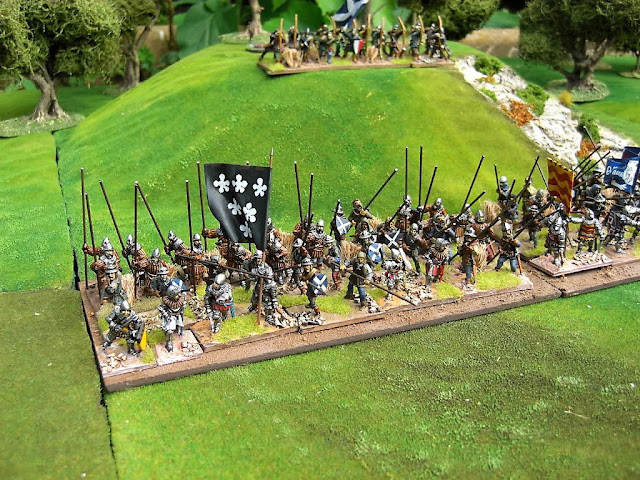 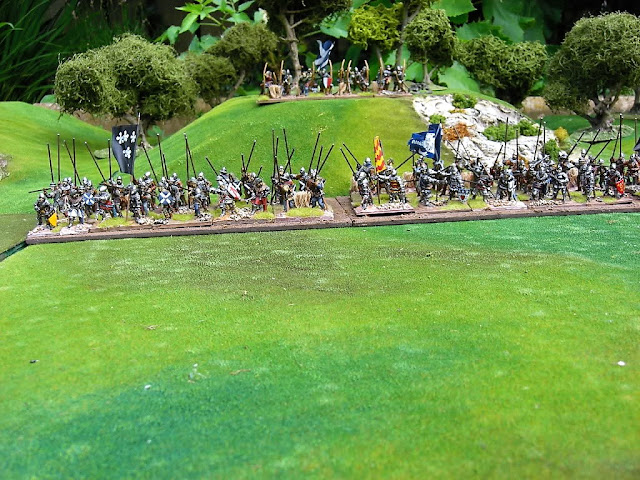 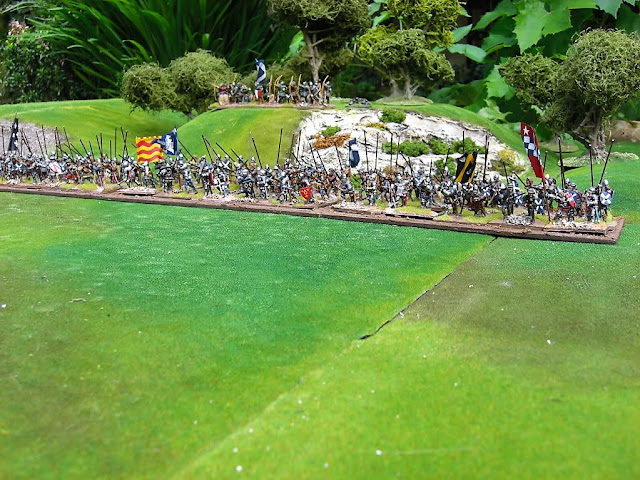 Finally presumably one of the girlfriends of one of the Earls (she's a big lass!) 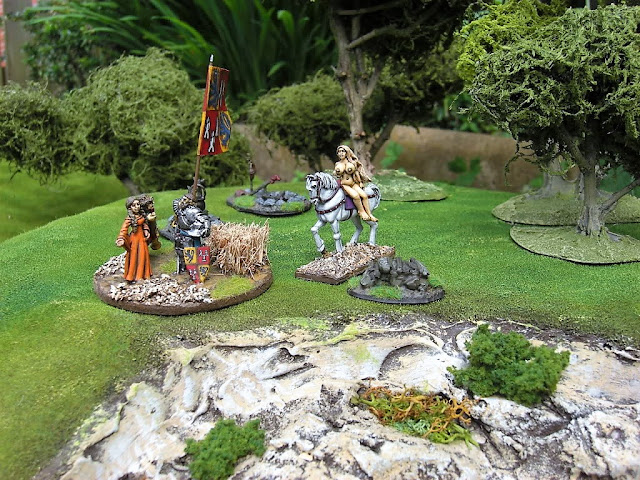 All the heraldry on each Knight/man at arms is accurate for those present at the battle and I have to say that I have had immense help with this from Charlie Wesencraft who really introduced me to this period in about 1975 when at 14 I went to a lecture by Charlie in Morpeth Town hall about Otterburn and using metal wargaming figures! Fantastic memories and very inspiring. Thanks Charlie.
At some later point I will post the list of knights/men at arms present at the battle.
Dave.
Posted by Dave Huntley (sheepman) at 04:34