Well, like everyone a pretty quiet Xmas and New Year, everyone safe and that's the main thing. Missing wargaming with the lads and I haven't really bothered with setting solo games up but I did get a small amount of painting done.

Continuing with rounding off my 10mm 1812/14 Napoleonic figures, there must be about a couple of divisions per side now plus cavalry etc. 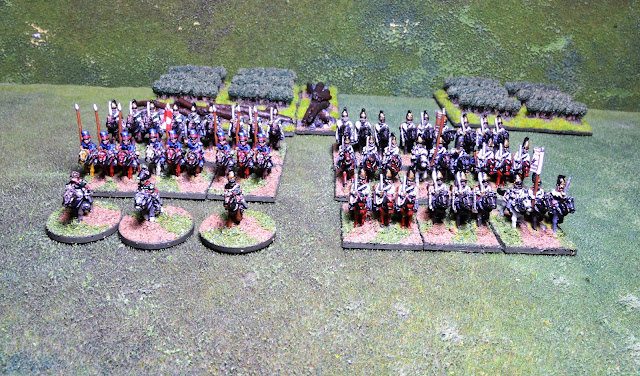 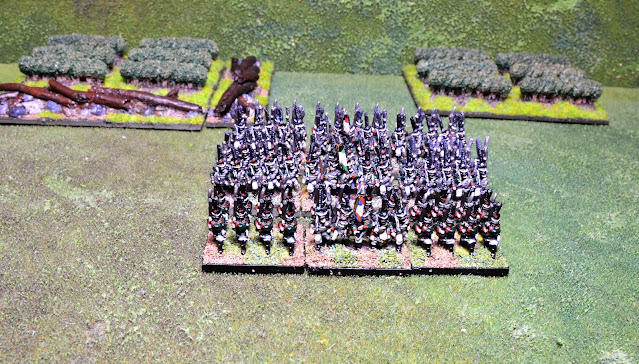 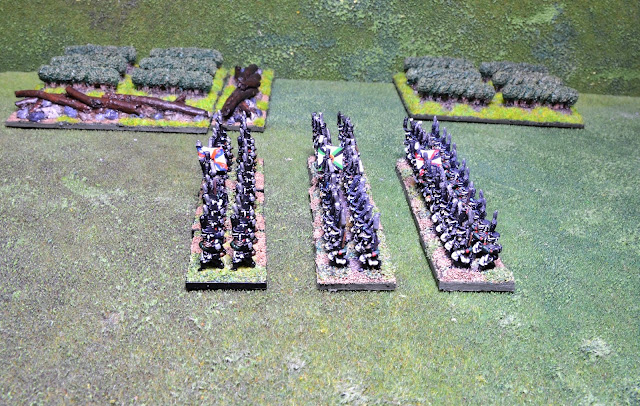 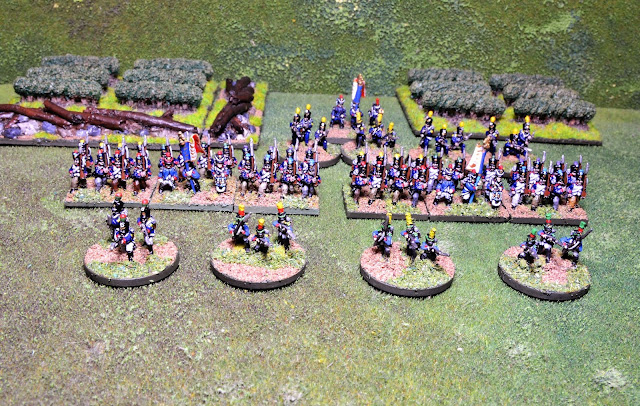 I'm not one for setting out plans for painting in 2021, frankly I can't remember what I did yesterday never mind planning what I'll do this year!

Continuing with the ongoing assembly of a Emigre brigade for the allied side in the French Revolution a raid into the odds and sods box pulled out a bag of 28mm AWI Old Glory Queens Rangers. So a grub through my reasonable collection of uniform info in all its varying forms found the nearest emigre unit to be the York Rangers, a light infantry unit raised in 1793 by Cpt G Ramsay comprised mainly of Germans with French/Irish emigre officers and deployed in Flanders for that campaign.

Now I will of course admit that I have taken some liberties with the figures in order to represent the unit. The head piece is ok other than the front plate which should be a star and the leggings need to be longer, stretching down to the boots. The water canteen is not shown in illustrations but I figured they have picked some up from the brits. The flags are completely made up! But here's the fantasy bit, the pack of Queens Rangers contained four grenadier and four lads in kilts and I'm afraid I couldn't resist painting them. Let me state quite categorically that there is no evidence whatsoever for grenadiers and highland dressed chaps in this unit.

The pictures aren't great, I was having a bad camera day: 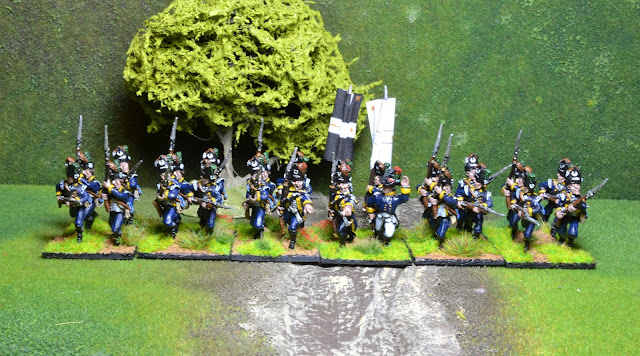 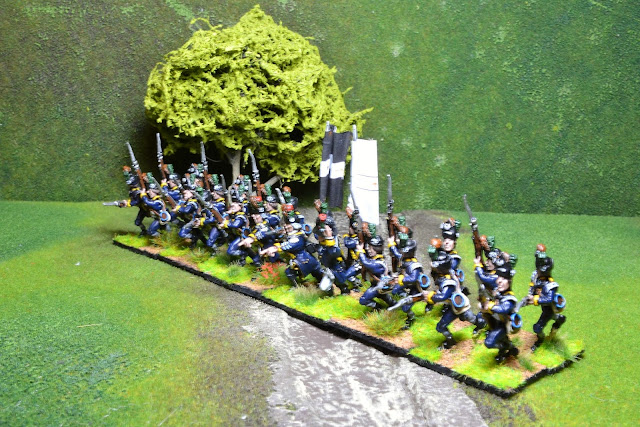 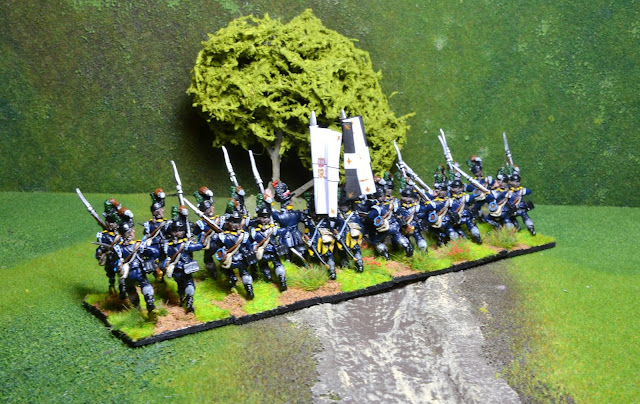 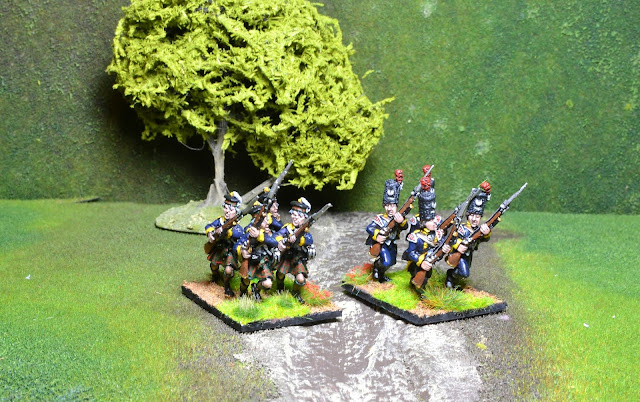 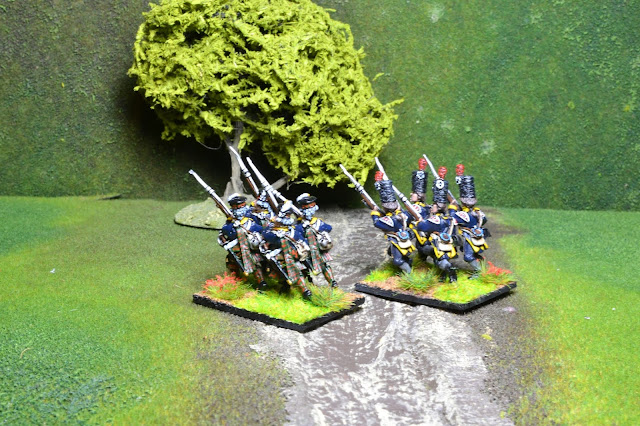 I think there's one more set of figures in their to paint up but back to 10mm Naps for now.
Dave.
Posted by Dave Huntley (sheepman) at 08:25 7 comments:

One for the future. 10mm ECW

As short post for a small unit. I don't usually post pictures of 10mm units one at a time and I won't get into a habit of doing so after this but I have to say I was quite pleased with these 10mm Pendraken ECW figures. Many more to do in the middling distant future bit I couldn't resist painting up one to start with and of course it had to be the King's Lifeguard. Going along with the 10mm theme I'm using for other periods each unit will fit into the 100mm hexes I recently purchased, hence the small size of the units frontage. 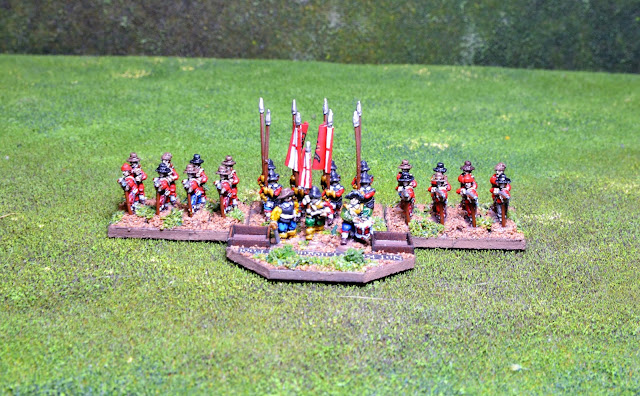 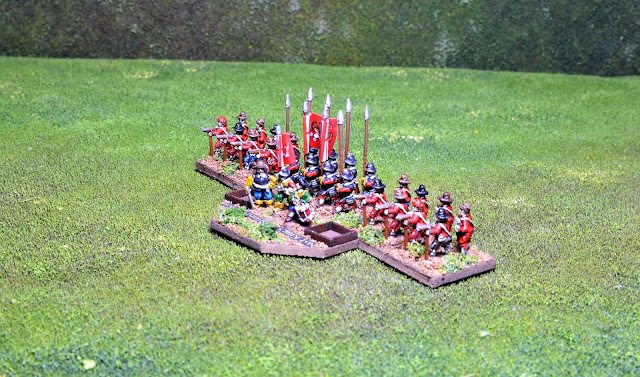 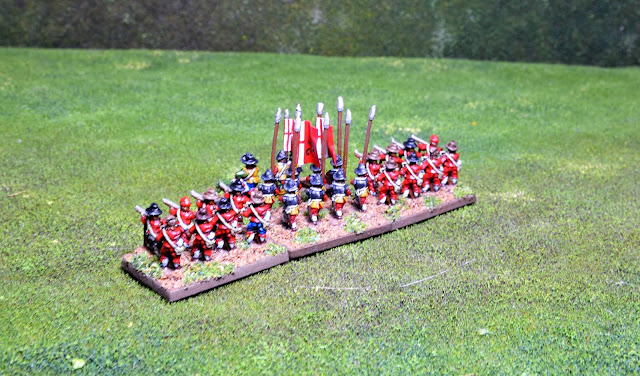 Many more to go of course.

I said I would and I did. 10mm rebasing.

I was never really happy with the Blucher rules system. That's no disrespect to those who like it or especially to Mr Mustapha but it just wasn't for me. A bit generic, a bit bland. You could have been fighting any horse and musket period really. However I went for it as it allowed replicating a largish encounter on a reasonable sized table which given Corvid and the inability to get to the local club would have suited me just fine as I have a 7' x 4' table available at home and I know how lucky I am to have that.

I will hold my hands up and admit that I should have played Blucher with the cards a great deal more than I did before going to all of the effort of basing up figures and then finding that I wasn't keen on the rule system but hey ho there you go. They were good figures, well based but nobody was willing to pay what I felt they were worth. That's no disrespect to any of the guys involved, it takes two to Tango as they say. So what to do?

I have been and will continue to sell my 15mm collection, this will fund the conversion and expansion of the 10mm Napoleonic chaps which (as you will see) have been re-based on a 90mm frontage per unit both to fit onto the hex terrain I use but primarily to allow the smaller frontage to get more troops onto the table I use thereby allowing larger battles to be fought. That's the idea anyhow. Rules of choice will be Dave Brown's General De Armee, a rule set that I and the club are familiar with and which I used for 15mm figures but now with a smaller frontage and probably game scale as well but I haven't started looking at that yet.

So the dreaded re-basing it was, The figures you will see below are predominantly re-based from their Blucher bases onto the 25mm x 20mm Fire and Fury sized bases which will allow me to use the Age of Eagles ruleset as well if I so wish. I will of course be adding to them having ordered from Pendraken and Magister Millitum aiming for a couple of divisions plus cavalry per side.Don't ask a time scale, you know how it is! 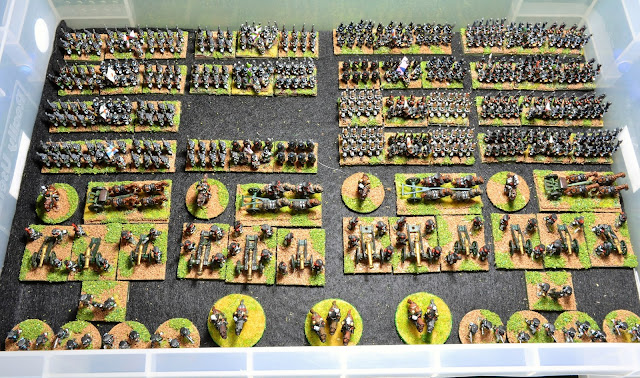 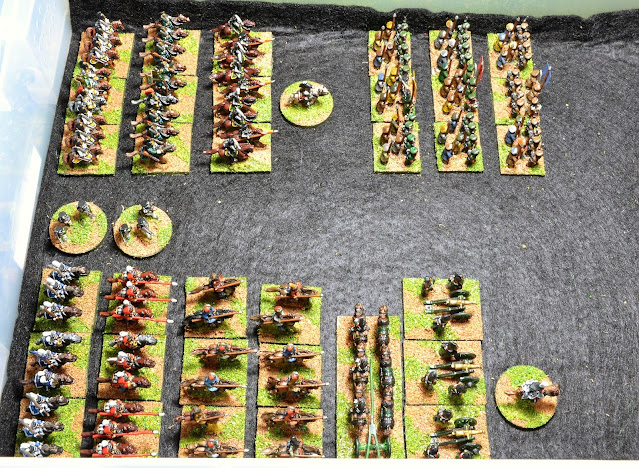 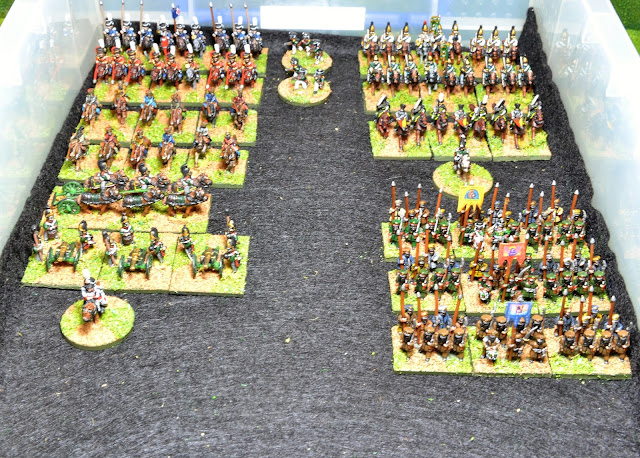 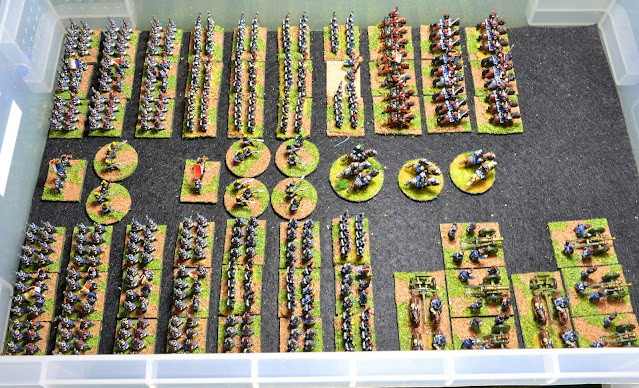 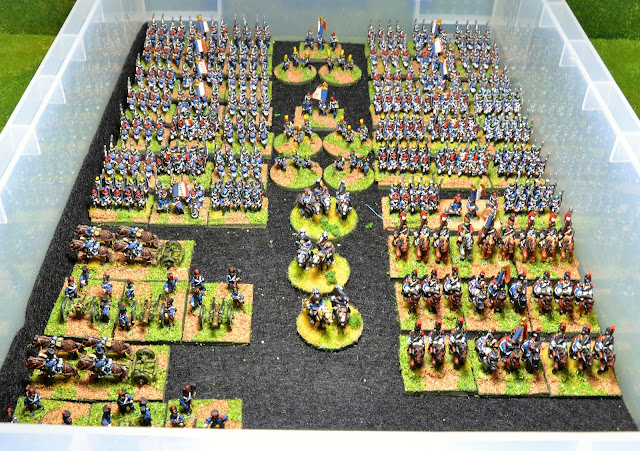 I have done some bits and bobs of terrain but I'll leave that for another post. Take care out there guys and girls.

You thought it was all over, well it is now, I think!

There hasn't been a post on here for a while and after scrolling down you will probably see why. I'm not one for posting each time I finish a 15mm unit, particularly if I have done a few similar units before and have already posted about them on here. A 28mm unit is a bit different as they take a bit more work but 15mm, na. No disrespect to anyone else but I will get a few units done before I shove them on here.

My FPW collection was started at least 15 years ago based mainly on the Wyre Forest adaptation of the ACW Fire and Fury rule set which was one I liked. The latest 'official' set is Age of Valor adapted from both Fire and Fury and Age of Eagles (the Napoleonic set). I had always assumed that my FPW collection was as complete as I could wish it to be, a foolish assumption I know but there you go! Now the Age of Valor rule set uses a slightly different figure scale to the original and I observed would need a few more figures added to the old collection to make it viable, yeh right, a few more. I have painted up approx 80 foot and 40 cavalry but it's the artillery that's the doozy 20 more models were needed. I then decided in my insanity that each model would have a limber, you will see the results in the photos below.

You guys may legitimately ask why all the gun limbers? Frankly it is of course all down to personal taste. They are not strictly necessary to play the game, though I do believe that a battery of guns was a big investment in both physical material and training, but also of the actual area of ground that it occupied on the battlefield and that this should be shown if possible when gaming. The down side is that limbers are a frick'n pain to assemble and paint and oh boy was I fed up with doing this lot by the time I was finished! I do think it will be worth it though, particularly in this period when the artillery played such a dominant (or not) factor in the outcome.

Anyway, on with the pictures: 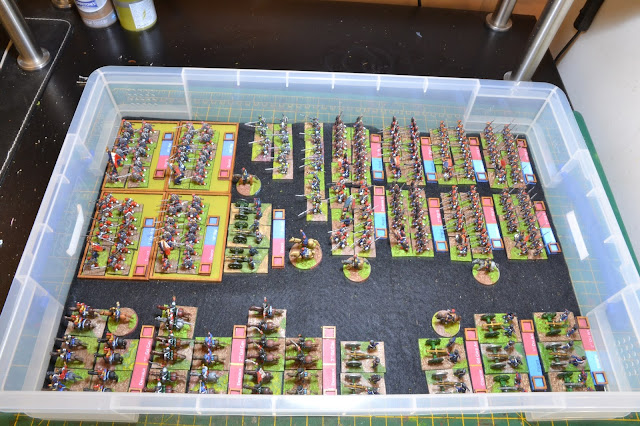 The rest of MacMahon's 1st corps. 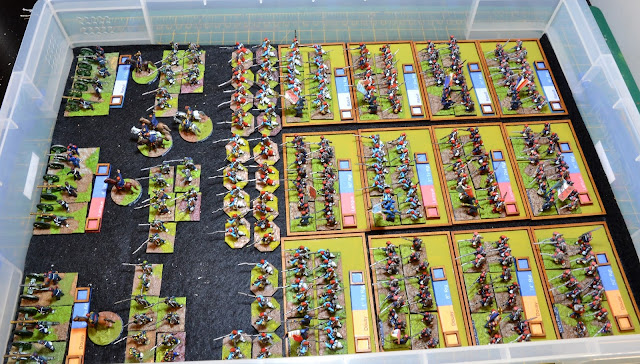 French 5th corps, all French corps had three divisions (other than the 1st corps.). Each division was made up of four brigades seen here with their attached three batteries of guns. The six batteries of the reserve artillery can be seen on the left. 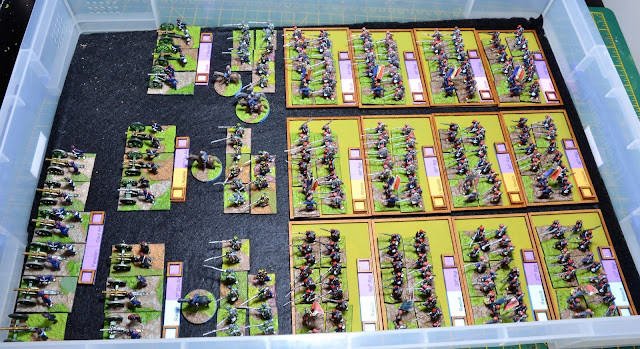 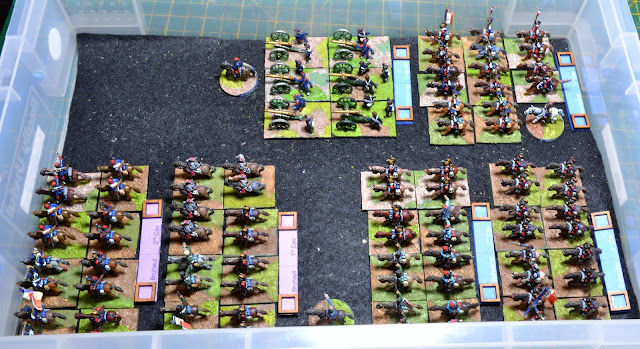 French limbers, see what I mean! 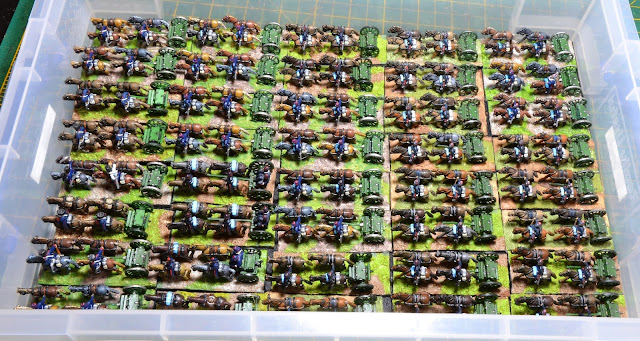 Prussian V Korps, two divisions composed of 4 regiments in two brigades with attached cavalry and reserve artillery. Note that the figures mounted on hexagonal bases are there to portray the heavy skirmish line thrown forward of the formed Prussian infantry. 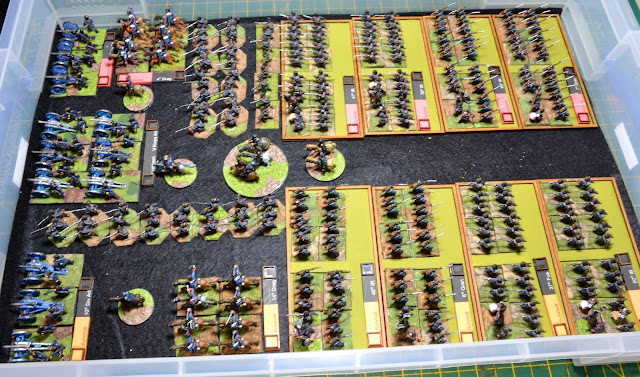 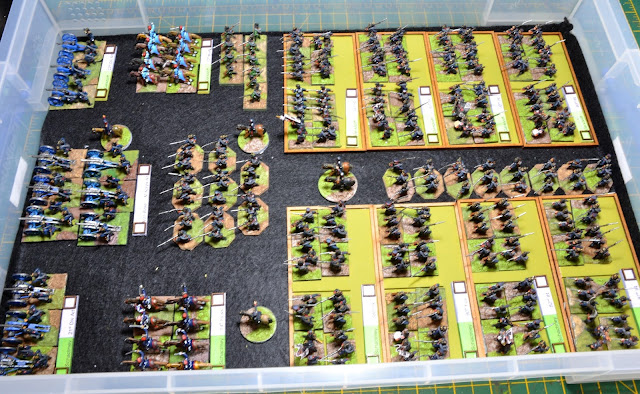 II Bavarian Korps, organised as per their Prussian counterparts though with some Jagers included. 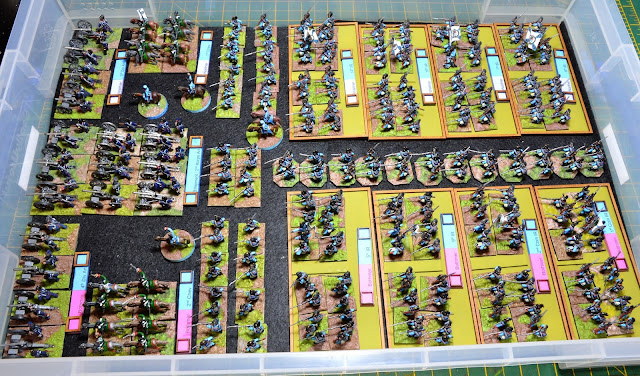 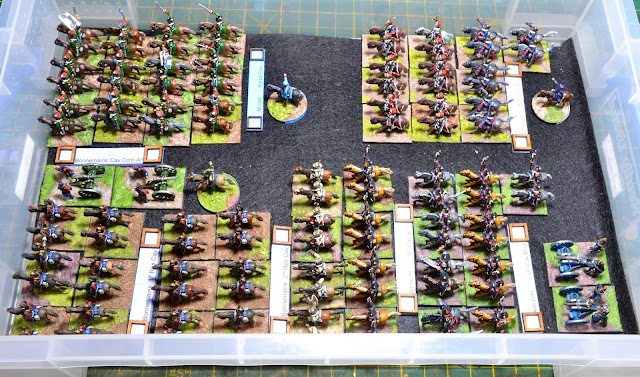 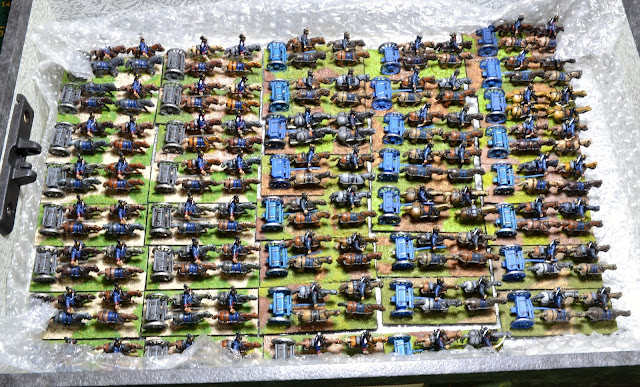 The figures are organised so that both Age of Valor and my adaptation of General de Armee rules can be used. I would be open to Bloody Big Battles but looking at photographs of various games on line the units used seem a little small looking for my taste and at twenty odd quid I'm not sure. People say they are a good set of rules so if they could be used with larger units I may give them a go.

Anyhow I'm pig sick of Franco Prussians for the moment so on with something else!