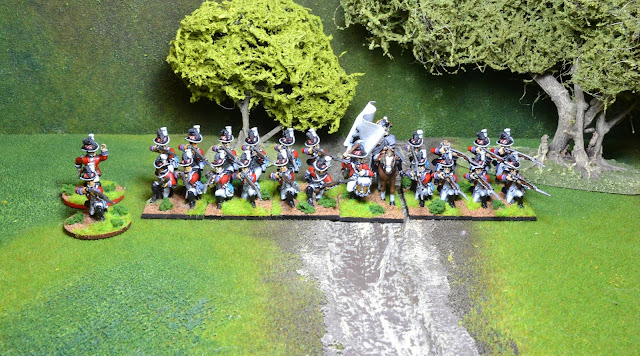 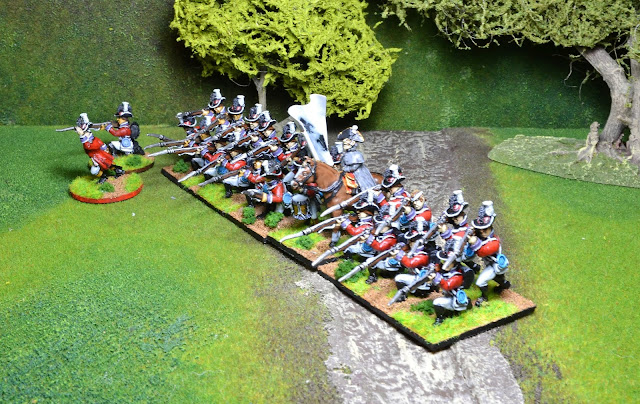 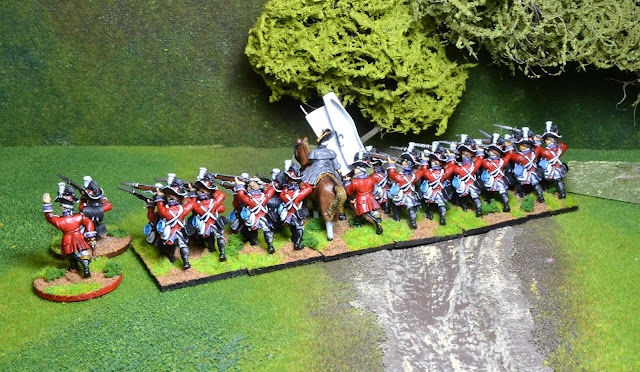 See Here for a link to EBay if any of you guys are interested: 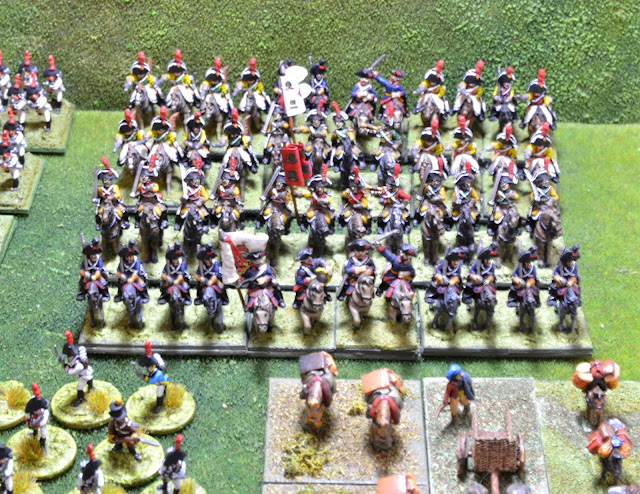 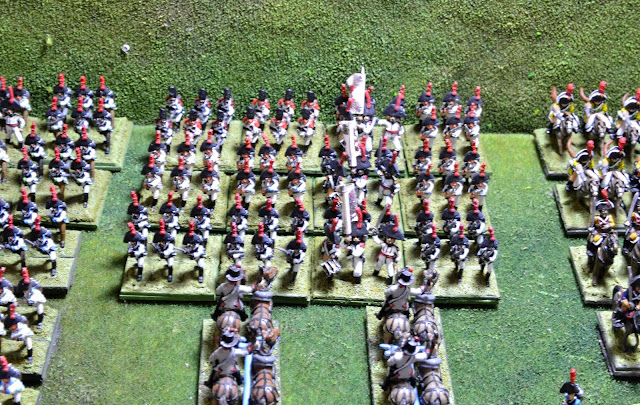 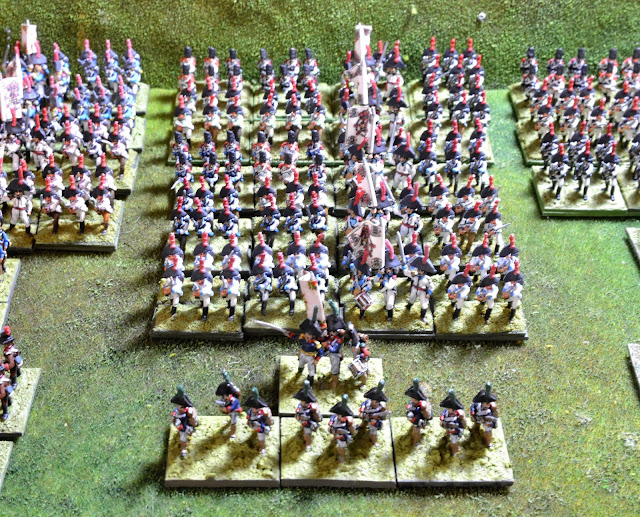 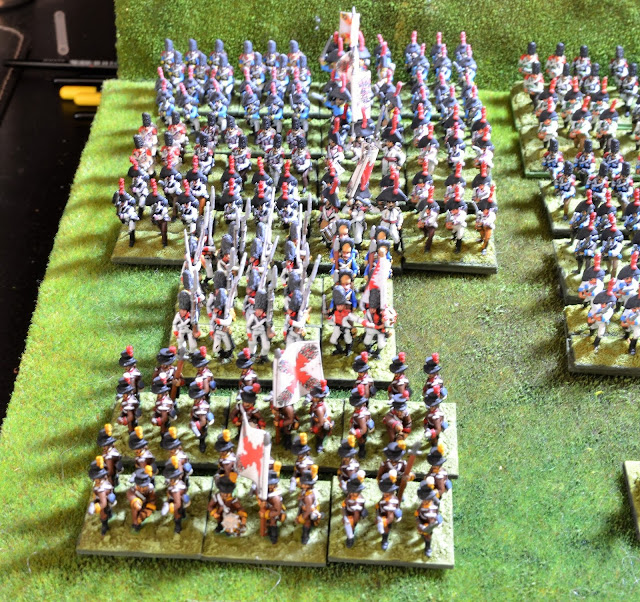 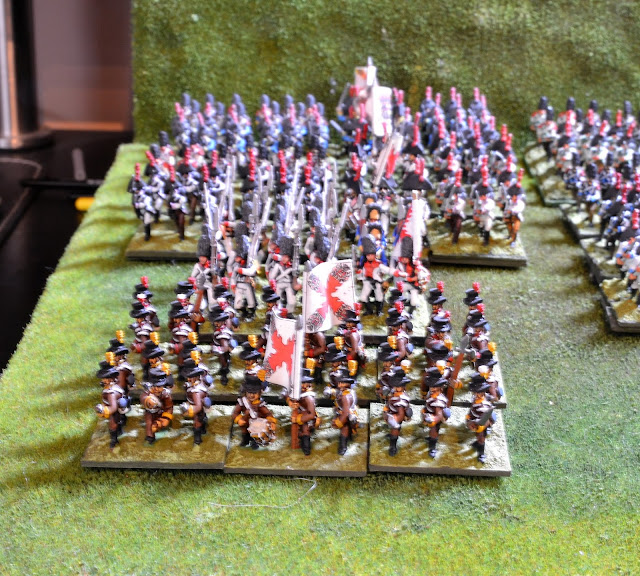 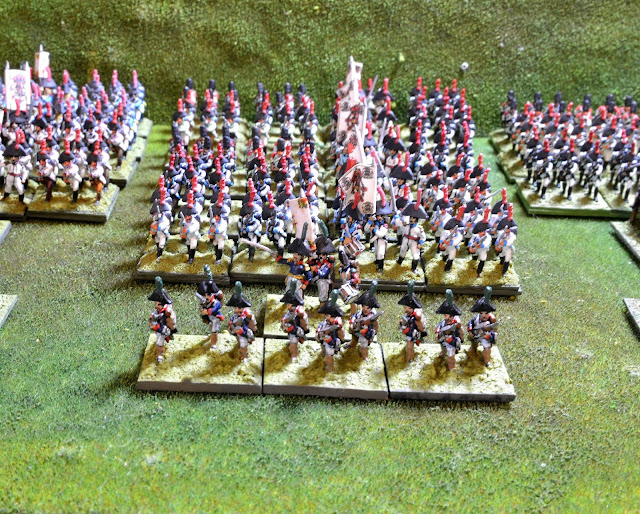 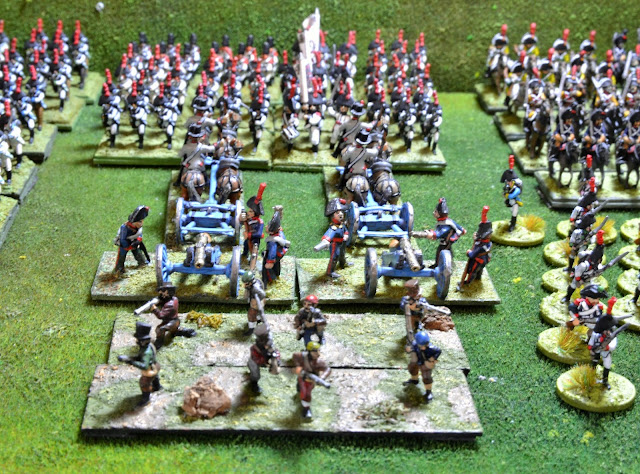 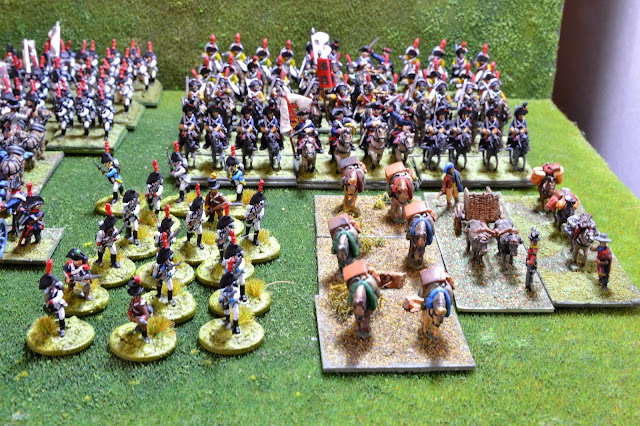 Having had a day or two to contemplate the game and the changes made to the rules to accommodate the later period I thought I'd write up my thoughts.
Firstly the game was fun, reasonably historical and once I concoct a quick play sheet will play through at a sensible pace. The battle pitting two Prussian corps against one large French one in a decent defensive position ended up with a Prussian victory, they suffered hefty casualties getting there but did the business once they got close enough to use the needle gun effectively.
The Prussian Krupp artillery wasn't as dominant as I thought it would be but I know that I still need to paint up one corps reserve artillery so that might have made a difference.
The French artillery was pretty useless as the Prussians rightly targeted them first and forced them to withdraw while the Chassepot seemed to be as effective as it should have been.
To sum up:

1). The table was rather too small for the number of figures on it so it was a frontal attack with little manoeuvring, though in my defence the object was to play test tactical scenarios and how the mechanics of the rule adjustments work or not.

2). Long range artillery fire was pretty useless which frankly is as it should be and usually is in most rules. Both sides need to be at effective range, I'm trying to decide if there should be a longer short range, canister or more accuracy at that distance, particularly for the Krupp guns (it's 20cm at the moment) don't know, we'll see with that one.

3). The Prussian artillery really could have done with spending more time softening up the French. Now in the later stages of the conflict they did this and it could be represented by giving them a bombardment phase at the very start of a scenario, say five attacks from each 'battery' before the game itself begins? You have to be so careful though as this still has to be an enjoyable game for the French player so maybe on a roll of a dice for each division the Prussian divisional commanded ignores whatever orders he has and attacks the French position regardless of orders (say on a 6). This happened surprisingly often!

4). Small arms fire seemed to be ok though I may try out increasing the cost of reinforcing the Prussian firing line. It costs the supporting unit 1 casualty point to replace a stand in the firing line at the moment, I may increase this to 2 casualty points. This will make the Prussian player think harder if it's worth standing in-front of the French infantry and exchanging fire or whether it's better to just charge in asap before their blown away.

5). An absolute must is to look again at the General de Armee melee charts and incorporate more of them into these rules. Thinking about it the Pickett's Charge rules in that conflict rightly assume that other than troop quality both sides are very similar but I think that in the European continent the subtle differences can be brought out slightly better using the Gen de Armee melee rules, certainly many of them. Fighting in built up areas is a very noticeable one were I think the rules in Gen de Armee favour the defender more and make it more difficult to prise a unit out.

6).The main thing I want to avoid is to stray too far from the basic structure of Dave Brown's set of rules and nor do I want to have reams of pluses and negatives for players to add and subtract during the game, This period is more complex than either of the two yet still retains a flavor of both.

I have to put one picture up so here's some extras I needed to have for these rule changes, oh and a random 28mm coach for the French Revolution: 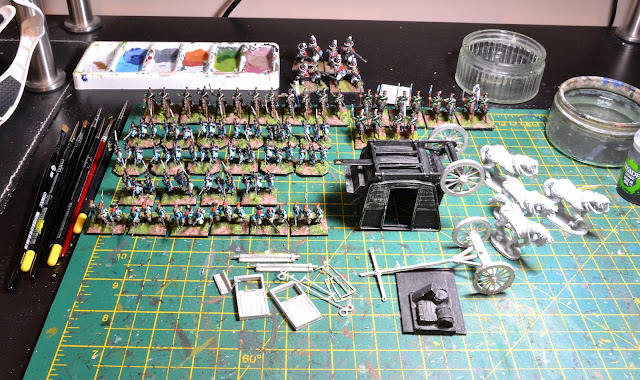 So more play testing but first I need to compose a workable quick play sheet which I can adjust as I go along. Well, I've got nothing else to do - Not!

The pressure begins to tell. 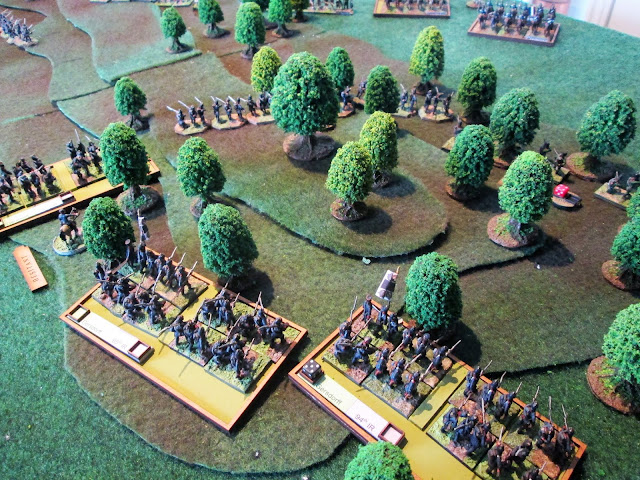 The chance was there, if only Von Schactmeyer the chief of the 21st division will take it. On the Prussian right his orders were to advance and force the French from the wood to his front, taking advantage of the close terrain he had done just that, now Von Bose his corps commander looking to his right saw that the French division defending this sector had broken and fled, now was the time to exploit the situation and turn the French flank.
Two turns, two hesitations on Von Schactmeyer's die rolls, he held the woods, job done. Wargames, don't you love em! 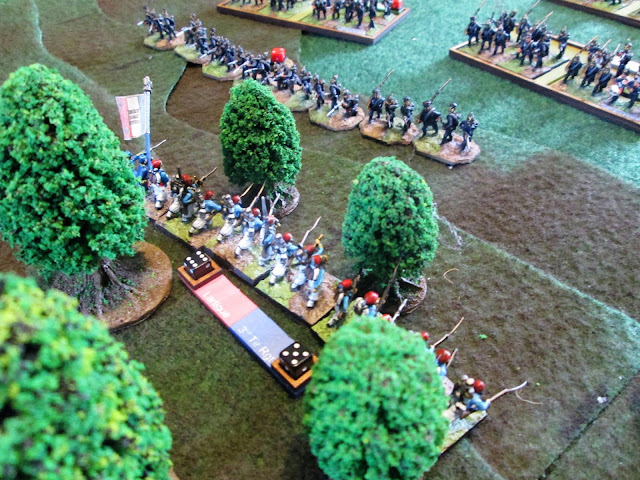 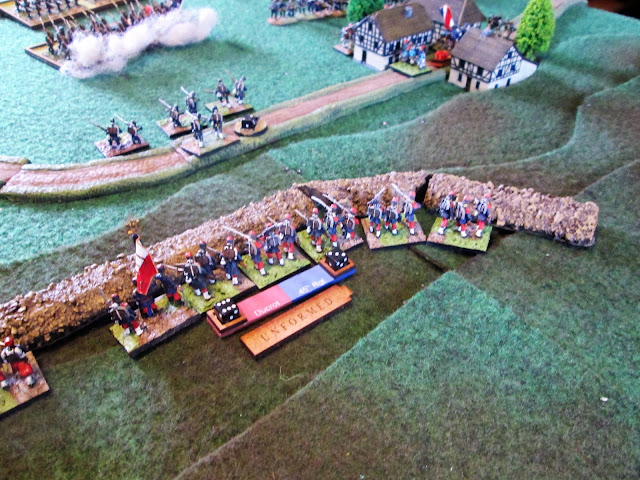 Elsewhere, all along the French line casualties were beginning to mount up on the infantry regiments, a combination of the incessant artillery bombardment and the Prussian infantry pressing forward. 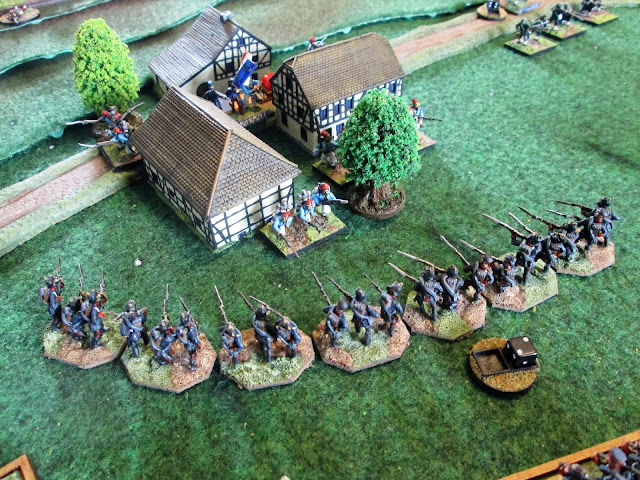 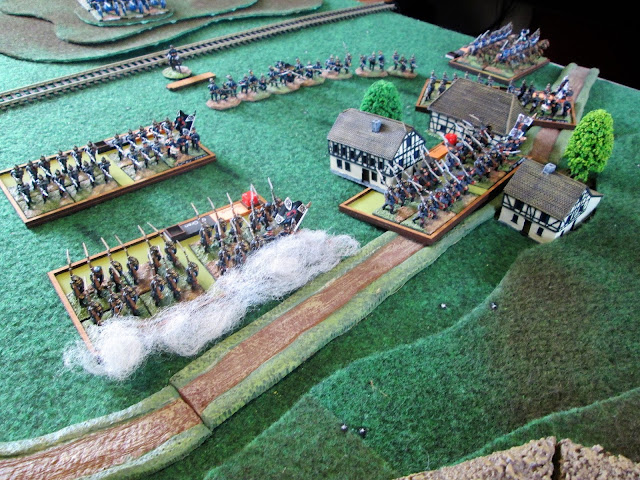 After its late start 10th division of V corps finally assaulted the village on the French right. taking it and forcing the defenders to retreat. The Prussian infantry rolled well but I have reservations regarding Pickett's Charge rules in assaulting BUA's, this was too easy for the attackers and I may well use many of the melee factors from G de A in the future. 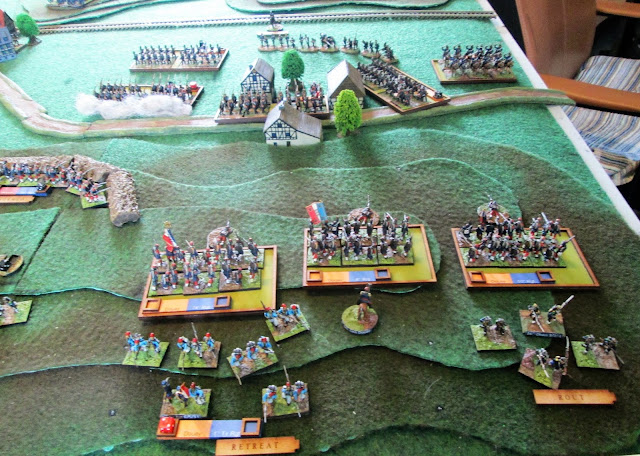 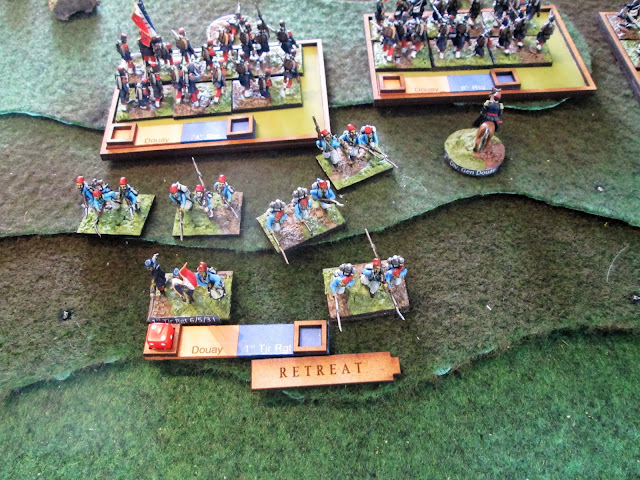 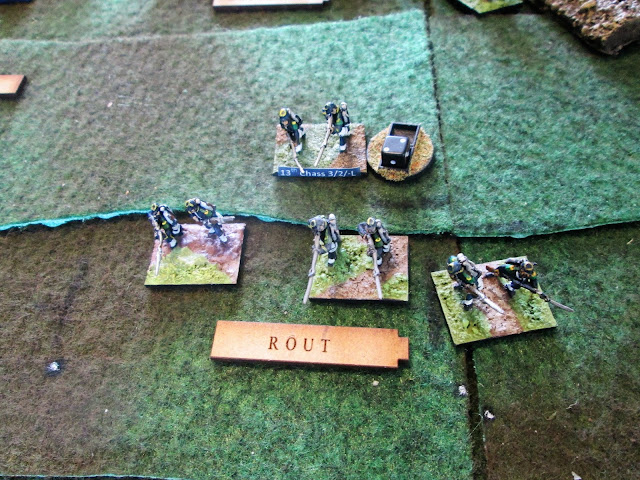 Not a pretty sight for the French, this division is now faltering. 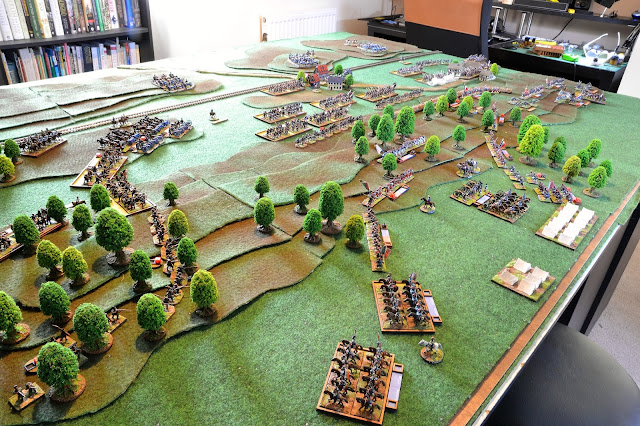 The French left with the reserve cavalry holding the flank. 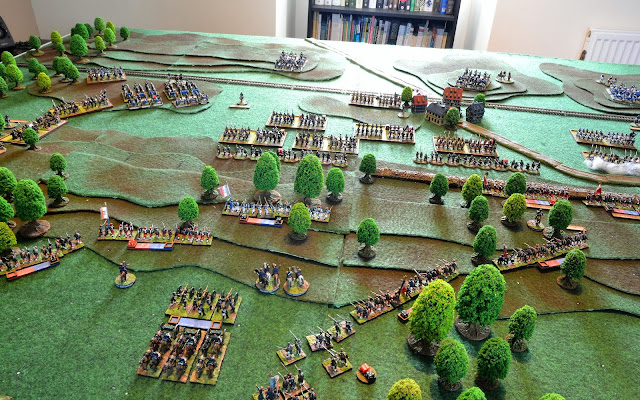 The French centre, they have been forced off the ridge and are forming a hasty defence in the rear of their main line. 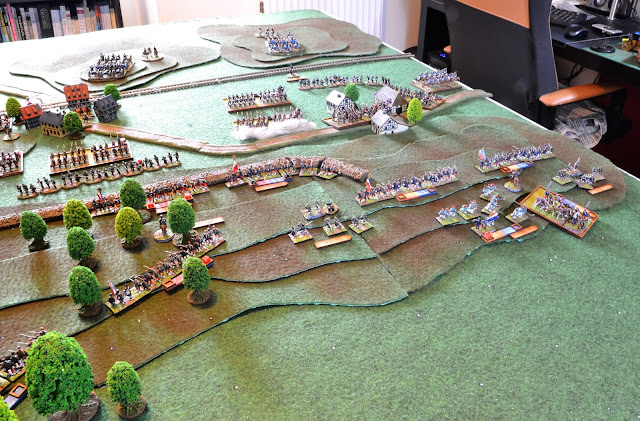 The French left, also under great pressure, the village taken and the right hand brigade detatching a regiment to strengthen the centre.

The view from the Prussian side, if the right had exploited the situation the battle would have been over quicker but even with substantial casualties their centre is pressing the French hard. 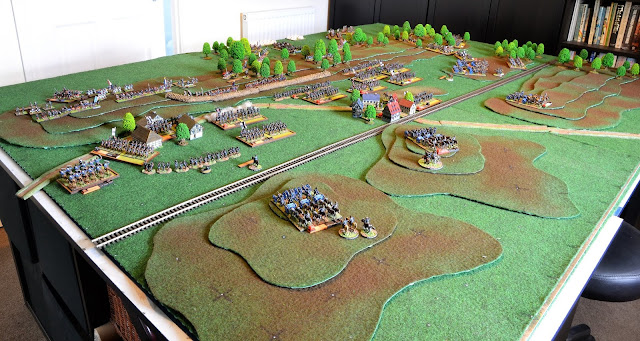 I called it a day at this point, the French would have withdrawn if they could using their least damaged right hand division and what was left of their cavalry to cover their retreat.
I will do one more post on this maybe tomorrow and go over what worked with the adaptions and what didn't. I learnt allot and enjoyed myself greatly but writing it all up and posting takes longer than playing the game. Good memories to look back on though!
Dave.