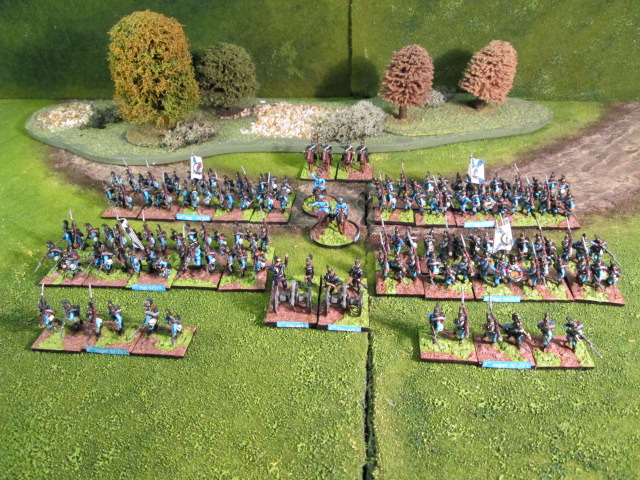 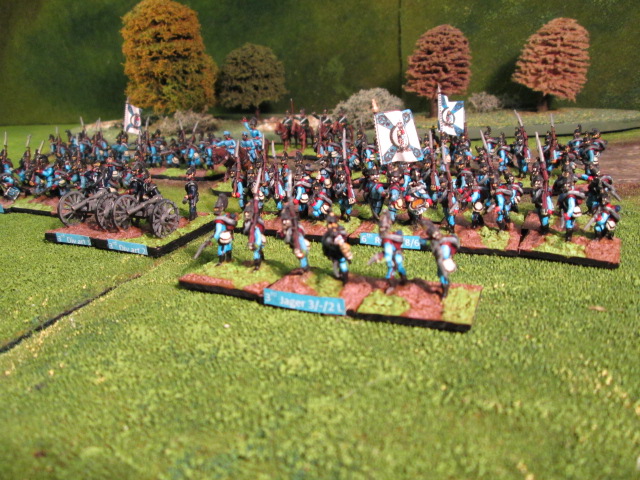 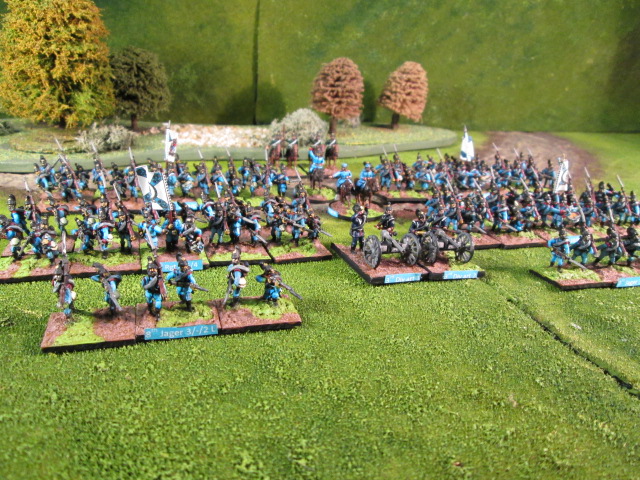 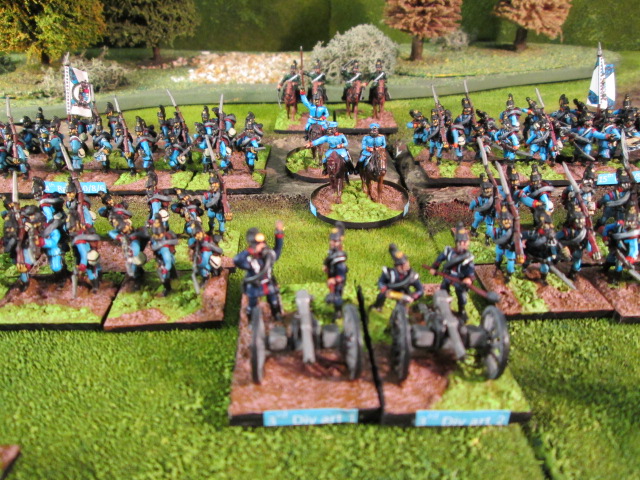 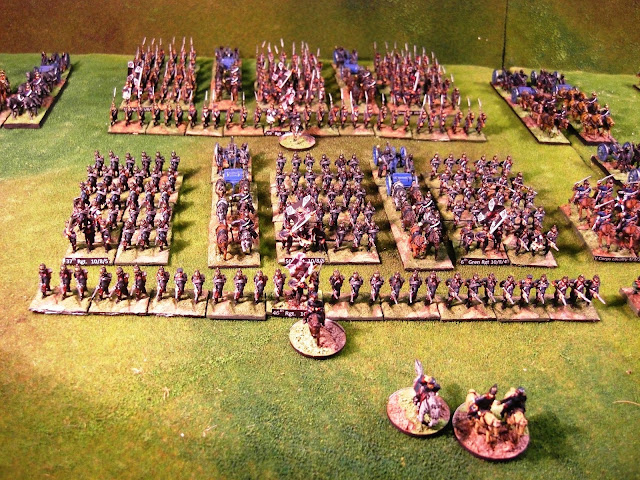 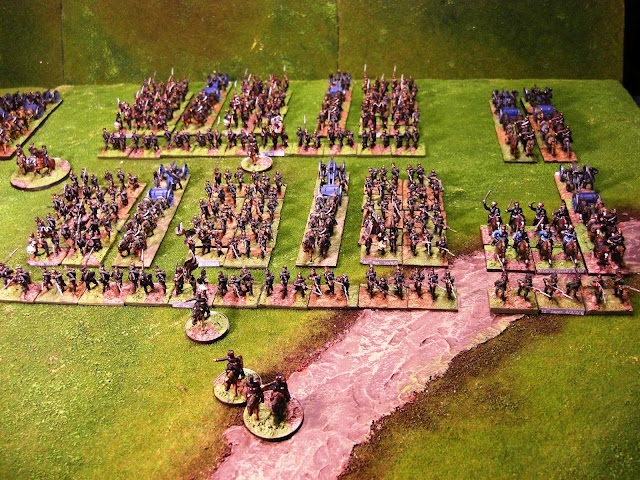 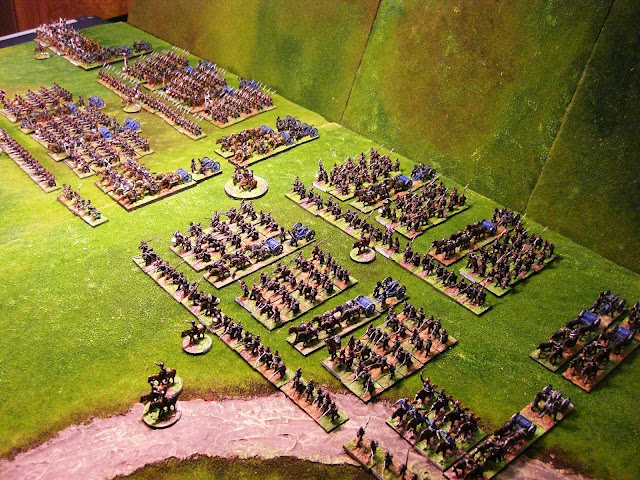 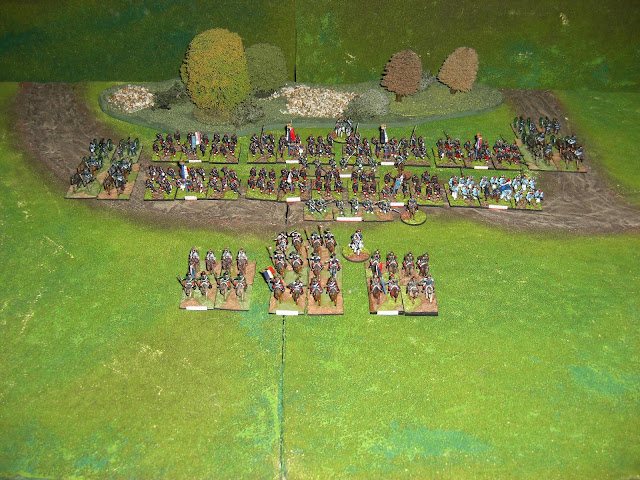 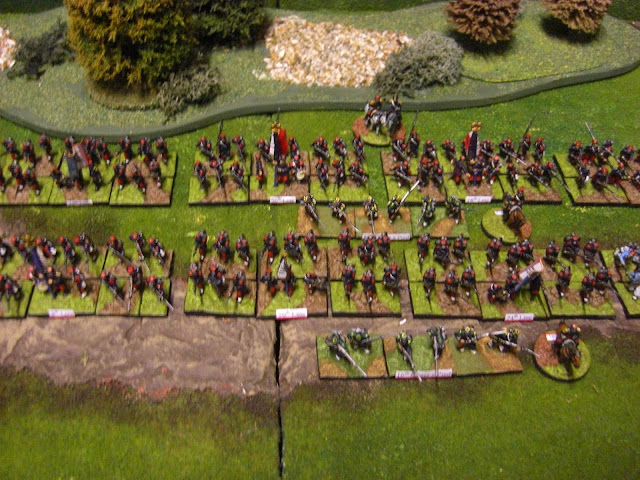 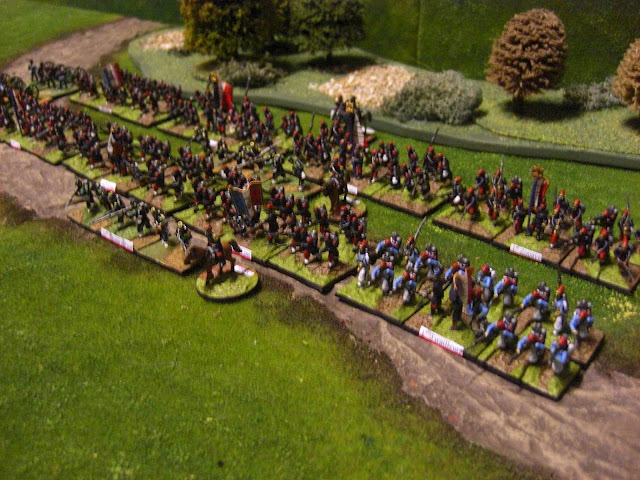 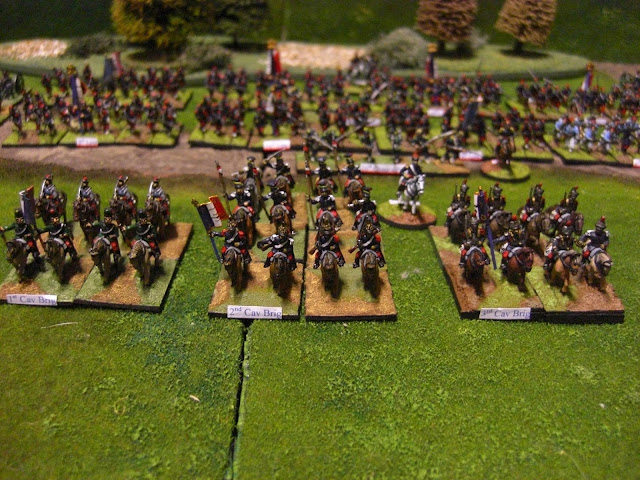 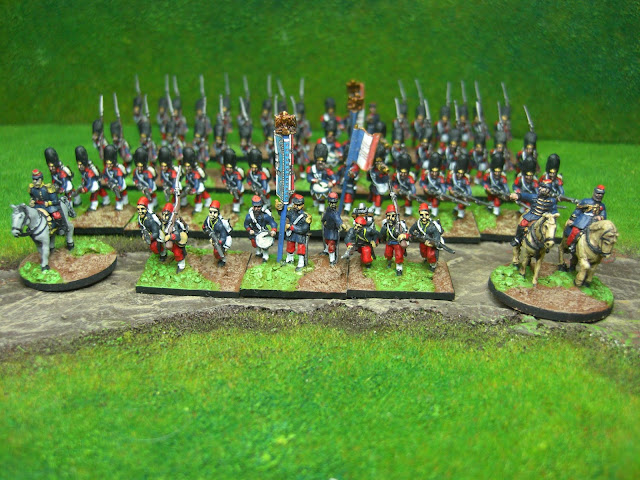 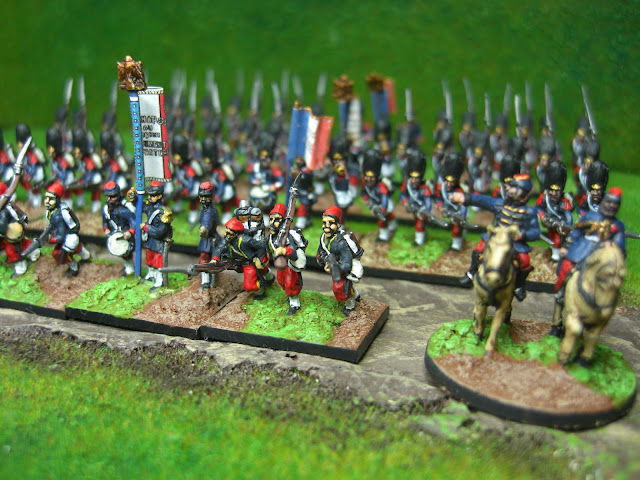 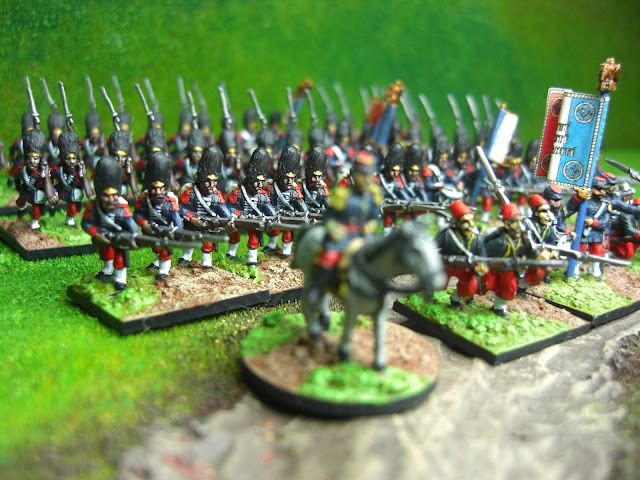 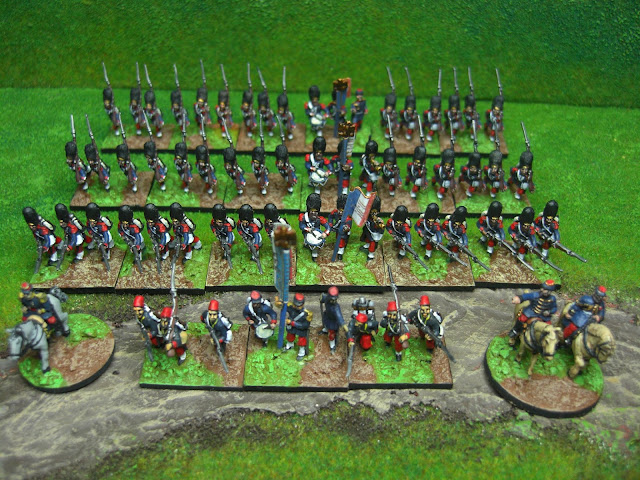 Just finished painting up the Prussian 2nd battalion 4th reserve Rgt, circa 1813. As you can see they were uniformed with British supplied uniforms when Prussia was desperately trying to re-build her forces during the war of liberation in 1813.
These lads are Foundry 28mm and can be found on sale on EBay here along with the other two reserve units painted previously here and here if anyone is interested. 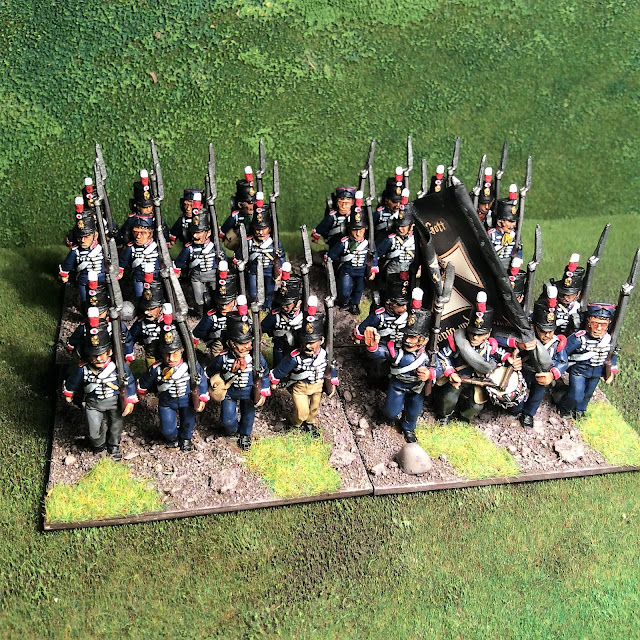 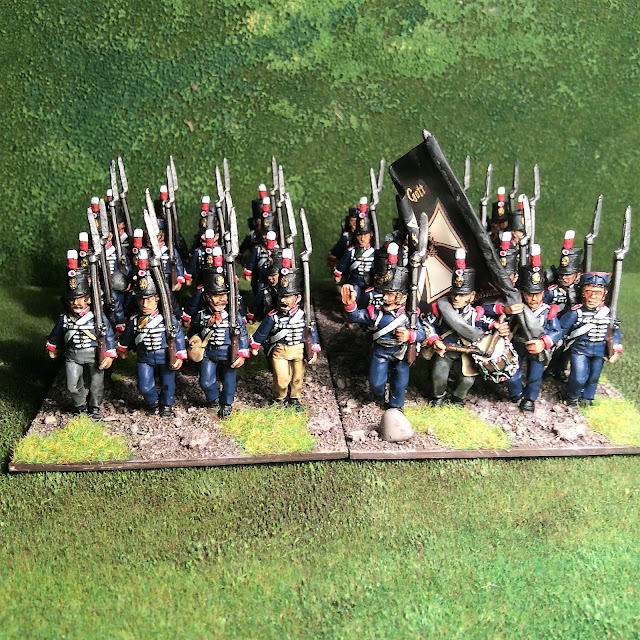 These chaps were never going to end up on my table so I hope someone uses them.
Dave.

The battle of Froeschwiller, 1870 continued. For the first part of this unbiased tale of French heroism combating the German hoards (and I did say hoards!) see here

With the French right wing hastily attempting to re-deploy the Prussian Juggernaut rolls forward in the centre.

With Scotty (the umpire) snickering inanely behind Chris looks at his French left wing wondering if his French can hold.

Who's that bloke on the left!

Divisional General Raoult directs the defence as a French regiment attempts to fight off the Prussian 94th regiment. As you can see both units have been through the mill.

Meanwhile the Saxon corps continues to put heavy pressure on Chris and his French left wing even though reinforcements are being continuously fed in.

The moments that probably saved the French army, the corps cavalry arrived and took up a position behind the now crumbling French centre, at that time the only usable reserve they had. As took place during a couple of battles during the war the cavalry was going to have to be sacrificed in order to buy time.

The first French light cavalry brigade launches itself into the attack, destroying a Prussian regimental column which it took in the flank but now finds itself exposed to fire from all sides. The second and third brigades do the same thereby sacrificing the whole reserve cavalry but forcing the Prussians in the centre to fall back to regroup.

Though the cavalry had done their job (at great damage to themselves) the German forces were still in a very strong position. After examining the overall situation everyone agreed that with a Bavarian corps and Wurttenburg division arriving on the field that the French were under pressure to maintain their hold on the ridge.
The first Prussian attack had been held but after awaiting their reserves and with the ability to now bring their massed artillery into closer range they would renew their attack next morning.
The French on the other hand had suffered greatly but had held their ground on the first day. Prudence demanded that they withdraw overnight (particularly as the Imperial Guard had failed to arrive) so a halt was called at this point.

The Wurttenburgers arriving on the German left.
It was - just a French victory, but I messed up with the deployment by trying to cover the whole front and leaving too few reserves. Instead of deploying each French rgt in double (supported) line, I should have deployed in a single line covering the same frontage using the Chasspourt's superior fire power to inflict casualties on the Prussian column and hit them with the reserves  when they threatened to break through.
Chris held the left well though under severe pressure from Mick's Saxons who performed exceptionally well. I buggered about on the French right trying to re-deploy while Neal put pressure on the centre of the line.
The Prussians (sneaky bastards) deployed mainly on the right and centre, sacrificing their artillery fire to long range only. As it was still pretty effective and it's a good job they couldn't get it any nearer due to their inability to get it across the stream.
It was a cracking game with good company.
Thanks to the lads, particularly Chris who's photographs these are and Scotty who umpired the whole thing, no easy task I can assure you.
Hope everyone enjoyed this write up.
Dave.
Posted by Dave Huntley (sheepman) at 04:31 8 comments: 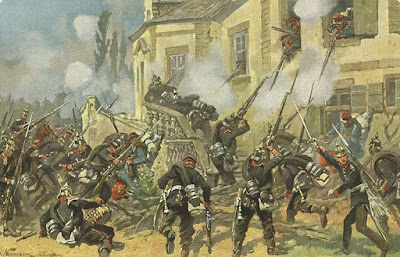 Our once in a while trip up to Mick's fantastic wargame venue last weekend consisted of a re fight of the frontier battle of Froeschwiller-Worth which took place during the Franco Prussian war of 1870.
As will be seen from the historical account of the battle here we (or should I say Scotty who organised the thing) decided to allow the French to receive the reinforcements that were due to arrive the day before and to replace the Bavarian II Corps with a Saxon Corps which Mick had painted up. 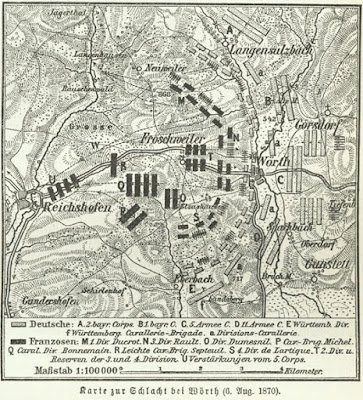 A map of the original battle on the 6th August 1870,  defending on the left, Prussians attacking right.

Most of the 15mm troops were painted up by myself and Scotty though as stated Mick contributed a Saxon Corps. The rules were hex adapted Fire and Fury Francais gamed on Micks fantastic hex table.
Neal and Mick took the obnoxious German states while yours truly and a first timer to our group Chris had the suave and debonair French (you can begin to see dear reader how fair and unbiased this report will be!). Scotty umpired.

The field of battle, French deployed defending the full length of the ridge line and the Prussians on the other side of the stream impassible to their artillery which had to shoot in at long range. (Ignore Neal giggling inanely at the strong French position.)

The Saxon Corps (commanded by Mick) can be seen at the top end of the table advancing on the French redoubts on their left.

With their Jagers advancing ahead through the woods towards the French left.

Mick (left) and Neal (right) pushing the Prussians over the stream towards the French position.

Chris, commanding the large French 1st Corps in the front line pushes a rgt of Tiraillures forward to help drive off the Saxon Jagers, but the main Saxon force isn't far behind and their artillery are causing substantial casualties even in the French redoubts.

A French cavalry division charges into the Saxon skirmishers in support of the Tiraillier rgt, destroys one Jager battalion but suffers greatly in return.

Meanwhile the Prussian centre continues it's advance encouraged on it's way by some abusive hand gesture towards the French commanders by Neal!

Scotty as umpire presumabally taking offence at the above hand gesture which I pointed out was made in his direction, it never pays to call the umpire a w****r. (he didn't really but it looked too good a photographic opportunity to pass up!)

With the pressure increasing on the French centre and left the right hand French Corps decides to hastly re-deploy to the north.

Next post, the pressure mounts!
Dave.
Posted by Dave Huntley (sheepman) at 07:59 7 comments: