As the title says it's been quite a while since Neal and I had a game of Sharp Practice and as Neal's 1812 stuff is almost ready for an outing I suggested refreshing our memory with a simple setup at my place.
French Revolution, Belgium 1794, the Austrians have to get the two wagons with supplies from their deployment point to the other end of the table. Now straight away I thought I'd place my dp close to the enemy and near to a house which if occupied would dominate the road, all very well but if the Austrians pushed on hard before my troops came on the table I was screwed! 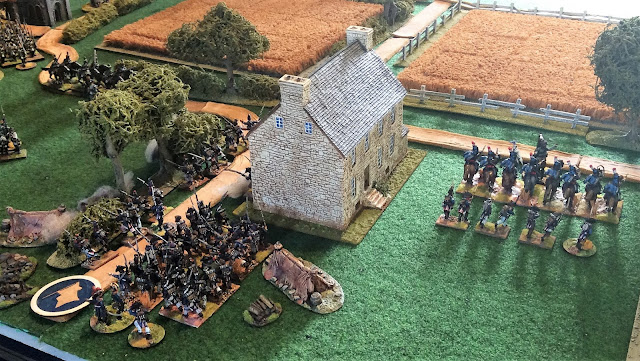 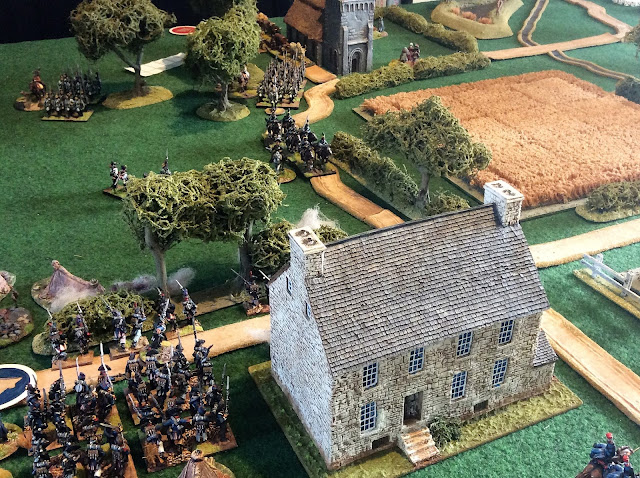 Fortunately the Republicans deployed successfully, two skirmish groups at the hedge line, one upstairs in the house and a unit of four groups of Le Blues supporting them. Hussars and another skirmish group in reserve.
The Austrians can be seen pushing up the road and approaching my tents. 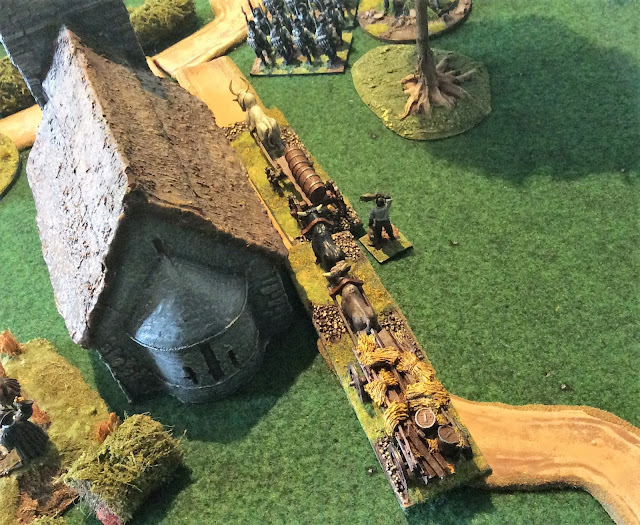 The two Austrian wagons in the rear which in the end played no part in the game as it turned out to be a straight up fight between the two forces. My fault I should have designed the table set up better and split the forces. 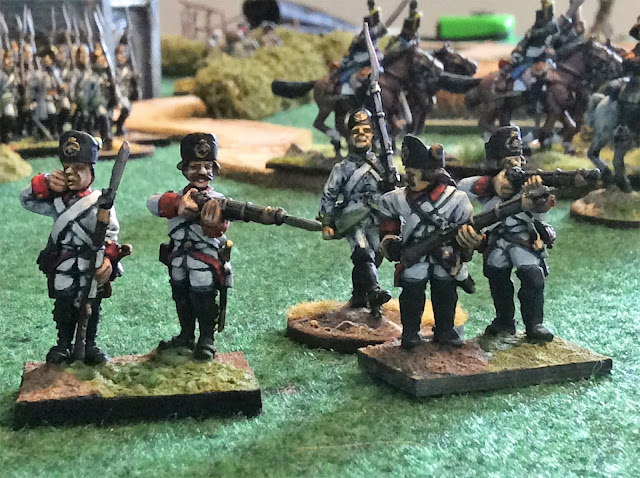 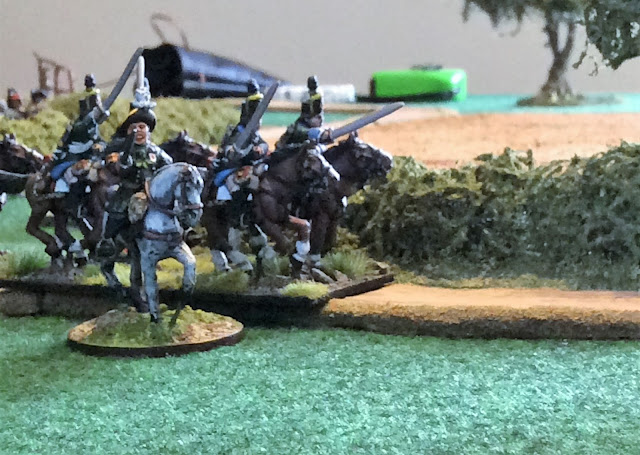 The Austrian skirmishers pushing on towards my tents with their hussars in column on the road. 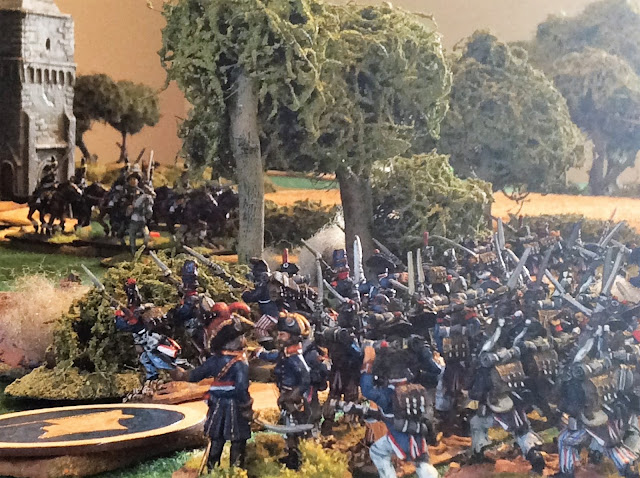 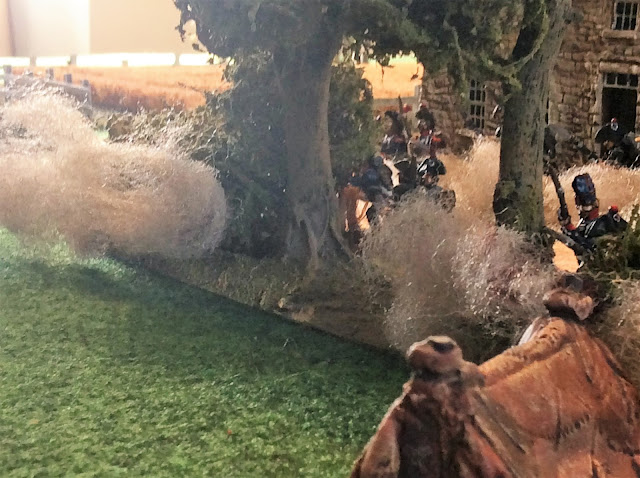 With first fire, leaders and a couple of command flags added the opening volleys from the French were pretty damned good, Austrian hussars shot from their horses and Austrian skirmishers skittled over. The hussars retreated the way they had come pulling up by a church in an attempt to rally off their shock. Great start for the gallant French (you can tell who's side I was on), a successful ambush. 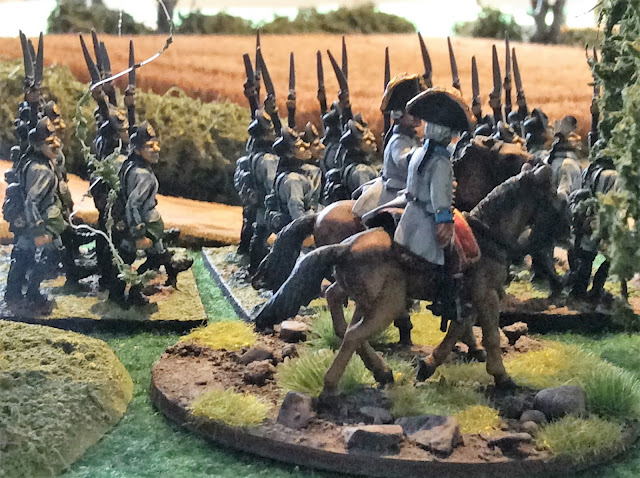 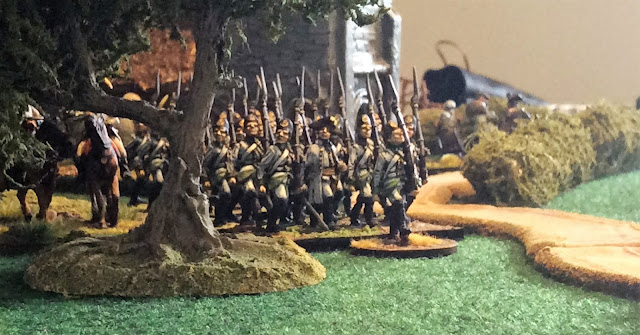 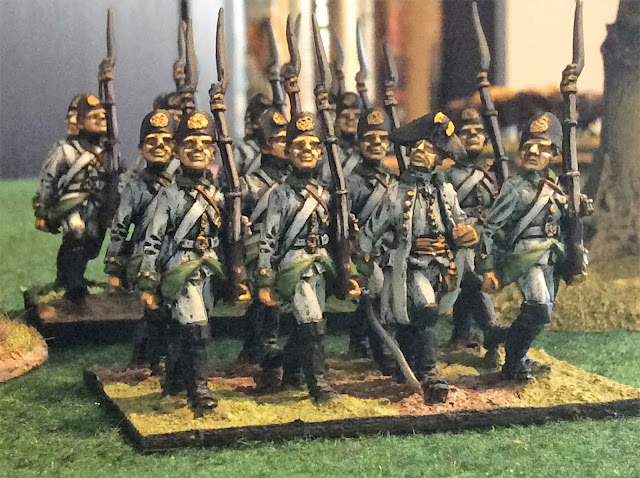 Now here's trouble, five groups of trained Austrian infantry marching up to deal with the now rather cocky French. 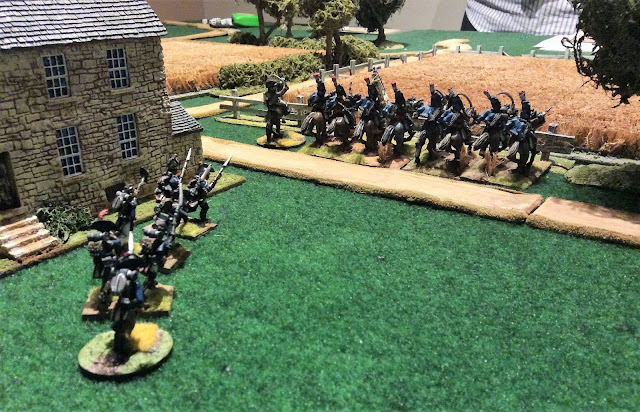 In the mean time the French hussars swing round the flank into the open ground supported by the irregular skirmishers. 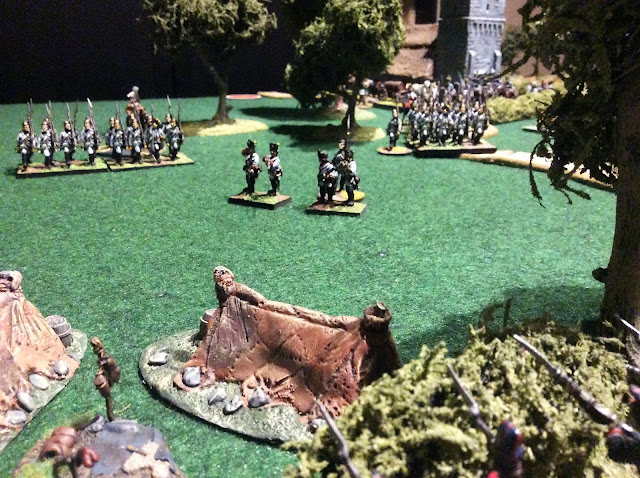 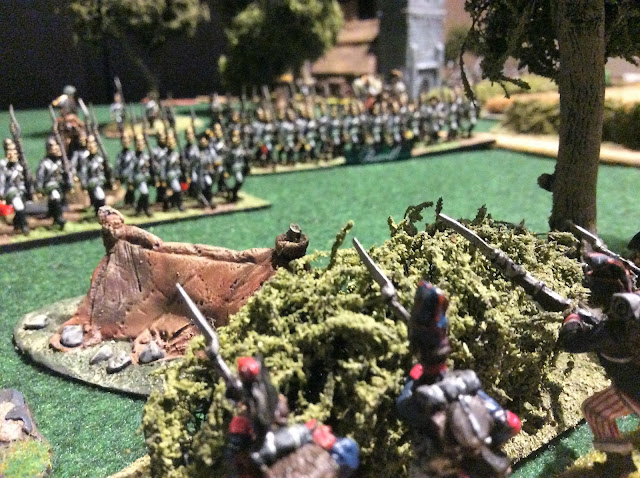 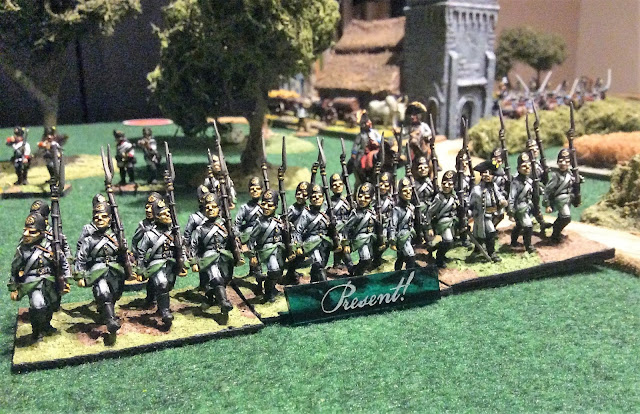 Now this is where it began to get nasty for the French. Peppering away at the Austrian line only did so much damage, especially as the level three leader and his pesky sergeant kept rallying off whatever shock they managed to put onto the regulars. The tokens came out well for Neal but he did play a blinder by half moving the line forward and then getting the regulars to present. This meant that the next turn the Austrians were firing controlled volleys. The result was inevitable, cover or no cover the French skirmishers were blown away! 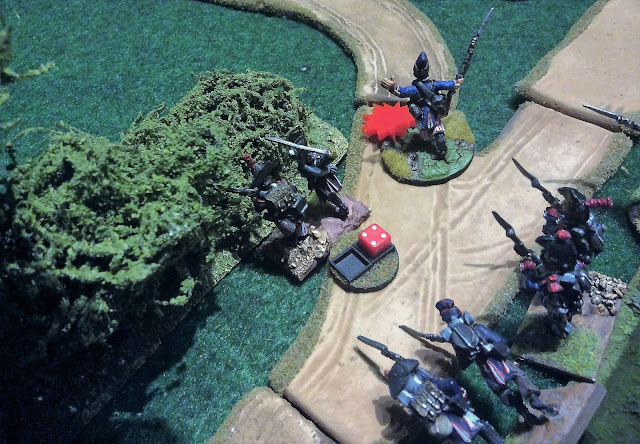 Poor photo but two figures left from six and four points of shock mean that rout is on it's way. The other figures are actually in the house behind. 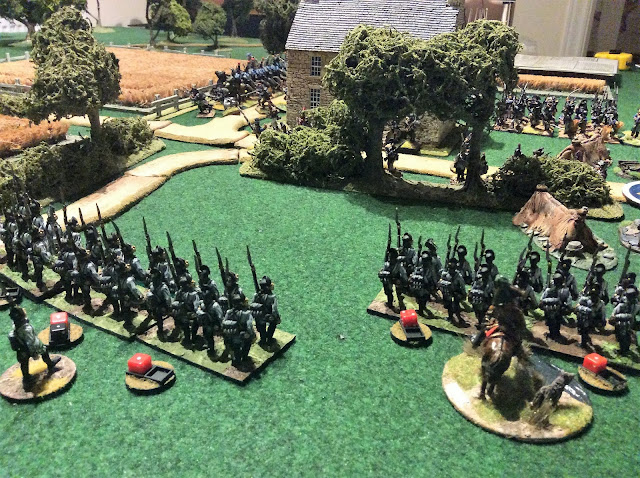 A bit of damage to the Austrians but not much. 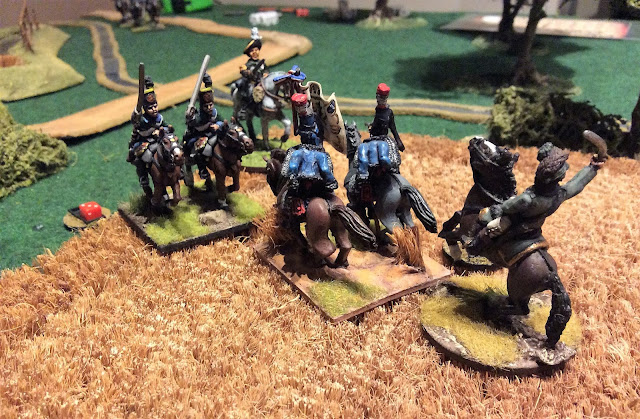 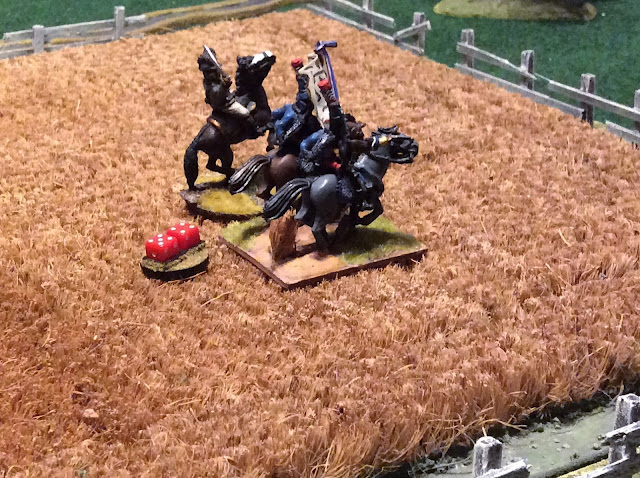 This is the after shot of the cavalry encounter on the French right. The French hussars galloped across fields and hedges to get to grips with the remains of their Austrian counterparts taking a few hits from Austrian skirmishers on the way. The Austrians having rallied off their shock from earlier counter charged and thoroughly trounced their 'weedy cove' counterparts who gallantly fled back towards the sacred republic screaming betrayal all the way. Someone is for the guillotine!
As my force moral throw at the beginning of the game had been of my usual pathetic standard that was the end, I think I had asked too much of the somewhat limited capabilities of my men, the four group column didn't even get into the fight but well done Neal - bastard! 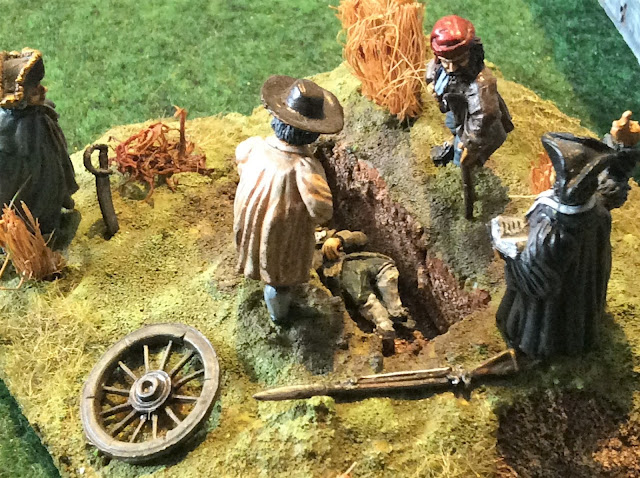 The first of many French dead to be placed in the ground.
Dave.
Posted by Dave Huntley (sheepman) at 08:16 8 comments:

I was going through some old photo albums the other day when I came across some photographs of my father Fusilier George Robert Huntley, 'A' company, 7th Battalion Royal Northumberland Fusiliers and an accompanying typed story written by him in 1947 for a local newspaper describing his escape from a column of POW's in the hellish winter of 1944 while they were marched from their camp in Poland back into Germany in the face of the Soviet advance. The story of many of these marches from various Stalags can be read in The Last Escape by John Nichol and Tony Renell, Penguin publication.
As you will see my father was taken at St Valery France in 1940 where his vickers machine gun company was attached to the 51st Highland division, I'll leave it to him to say the rest: 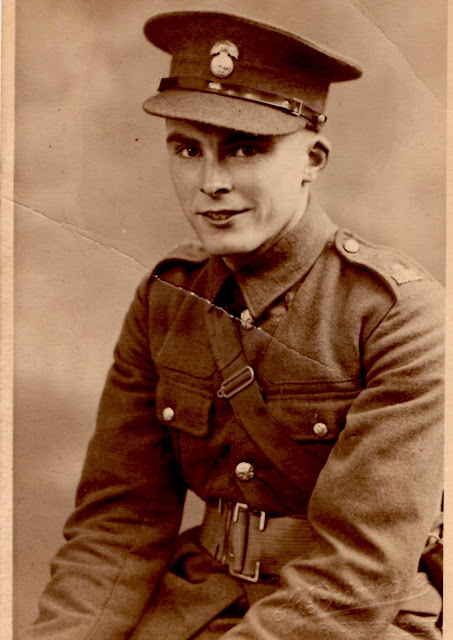 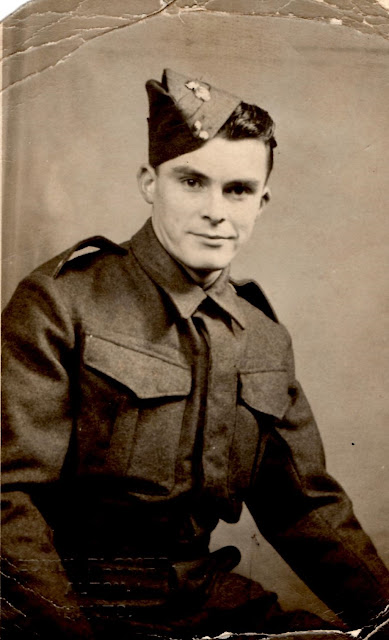 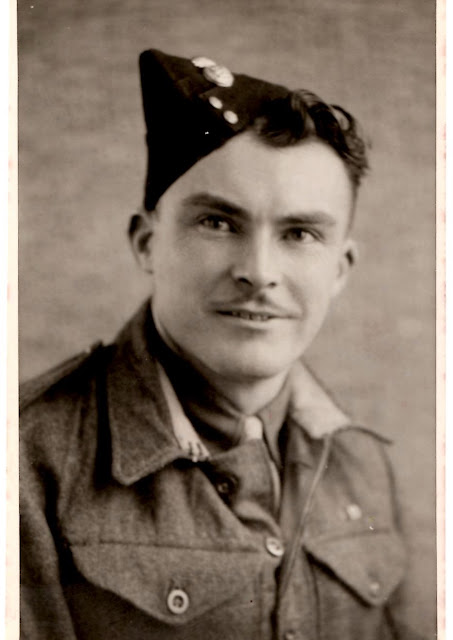 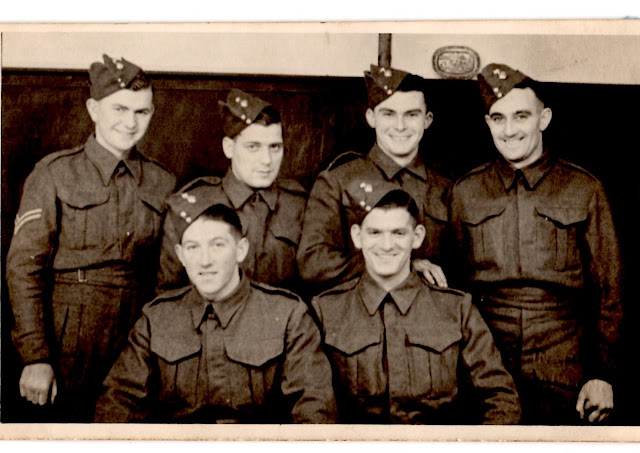 Fusilier George Huntley, third right back row 1940 before capture. Only other person I know is his sergeant, Tommy Fawcett to his right, great friends after the war. 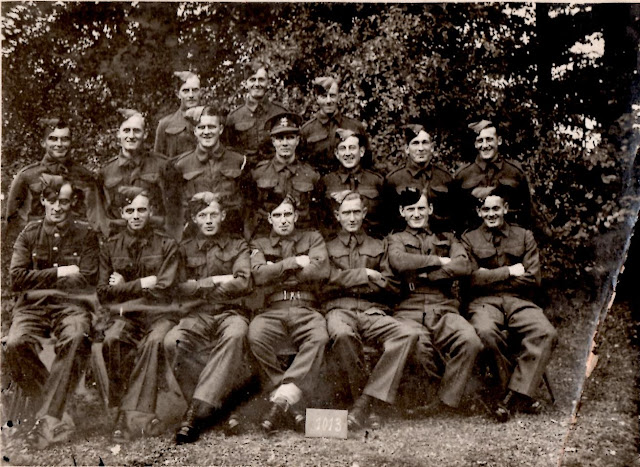 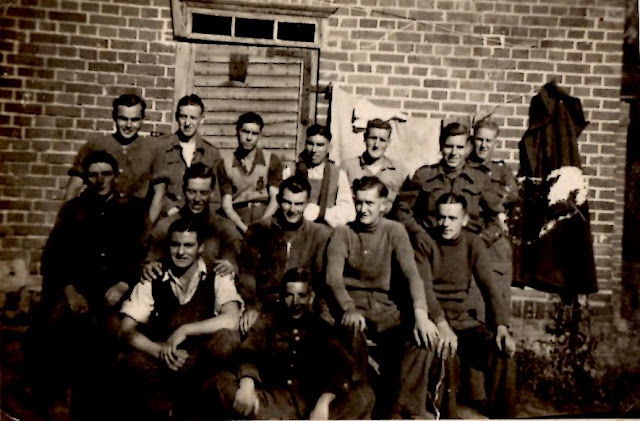 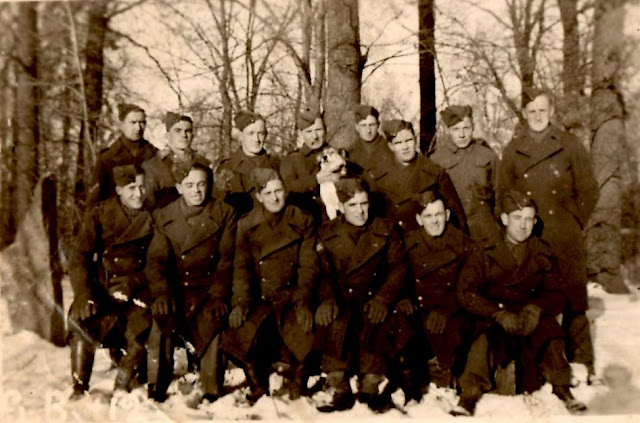 Various pictures of him and the lads after capture in and around Stalag 20B near Danzig Poland.

These lads were all heroes, still miss you Dad.
Dave.
Posted by Dave Huntley (sheepman) at 12:21 6 comments:

Manufacturers - how not to sell your figures.

First:
Popped onto Neal's blog this morning Here , one of his ongoing passions at the moment is Sharp Practice, 1812 America in 15mm. He is building up a nice collection and we have already had some great games, happy days!
Neal, like most of use is always on the lookout for 'the' range of figures which suits his taste and the period and now believes he has found them in Stonewall figures This is them . Now if you click on the link then you will see what seems to be a comprehensive list of figures which, I'm sure will grow and as Neal says when he got a sample it was great, no flash, just what he wanted.
But there's no bloody photographs! For gods sake what does it take to photograph the figures you are trying to sell and put those pictures on the page of your site so that people who are deciding to part with their cash can see what they are getting for their money. Hey it ain't rocket science, it's your product, it's your living. This company (and many others) have invested thought, time and effort to research and produce these things, why not show them to the customers.

That's the first thing, secondly:
I want a 28mm Napoleonic Prussian gun battery. Easy, loads of manufacturers out there, who does the best figures for this range. For me it's Calpe, lovely stuff, seen them, never bought from them. You can see where this is going folks. Well not exactly, went on their site, originally looking for landwehr home page, Prussian, infantry - no landwehr, ok. Eventually had to Email a mate and he gave me a link, don't know yet how to get to them from the home page but you'd think they would either be under Prussian infantry or have a category of their own.
Next the artillery, Each gun is separate, each figure is separate caissons horses et al. No PayPal. Fuck, all my spare war gaming money is in PayPal can't be arsed to wait to change it over. If I want to order I have to type in the figures I want and Email them to the guy, lots of work. No no no, won't do it.

Perry's - you have to paint them. Seems obvious but you really have to paint them. They are very nice figures but there's no dry brushing these lads the cuts aren't deep enough so it is more work. That said you go one their site, Napoleonic, Prussian, scroll down to four types of artillery with gun crew as part - click once on each one, go to checkout it gives you the option of PayPal, one click on that job done. Seven clicks of the mouse and for £50 the items are on the way to your house.
Which option do you think I took! Calpe just lost money.

These companies must get with the times or no matter how good their product they will not last. Call me a lazy bugger but I and many like me will go for the easy option every time, and I want to see pretty pictures of what I'm paying for.
Dave.
Posted by Dave Huntley (sheepman) at 02:56 13 comments: