Well, I finally got stuck into my refight of the battle of Waterloo using Sam Mustafa's Blucher rules. Now those Brits of a certain age will know exactly what I mean when I quote Dick Emery - 'I fink I got it wrong again Dad'! of which more anon.
However for the moment I'll post just a few of the pictures, it ain't pretty as I was using the cards provided with the game but as I haven't got six million Brits, French and Prussians painted up in 10mm one just has to make do.

I will give a brief description of what went on in each photo but generally I wanted to stick with the timeline of the actual battle and replicate what happened when it did as close as possible thereby seeing how close the rules could get to what actually occurred. 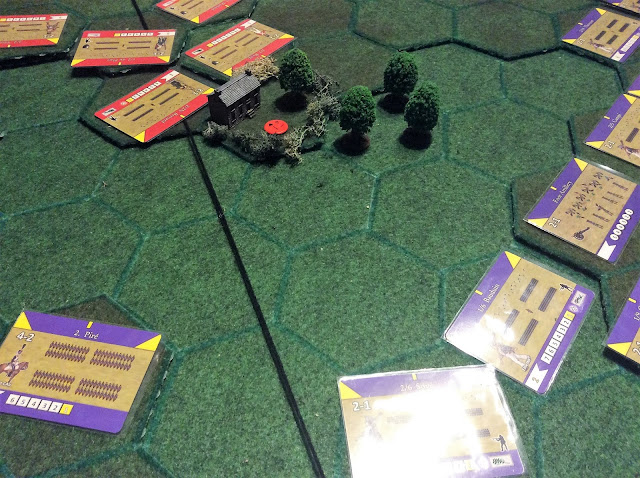 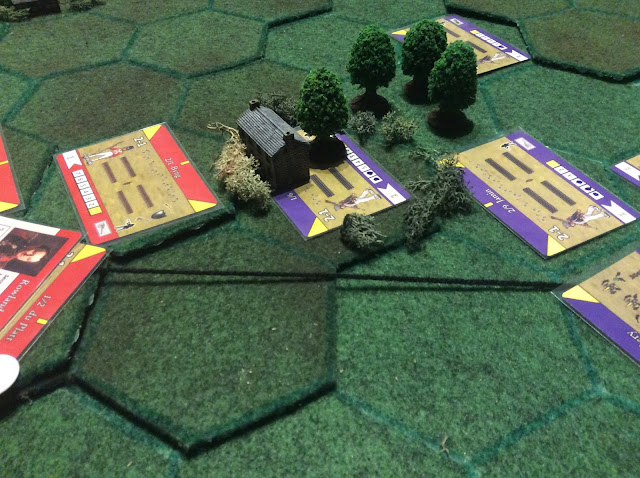 Eventually taking it (history out of the window!) 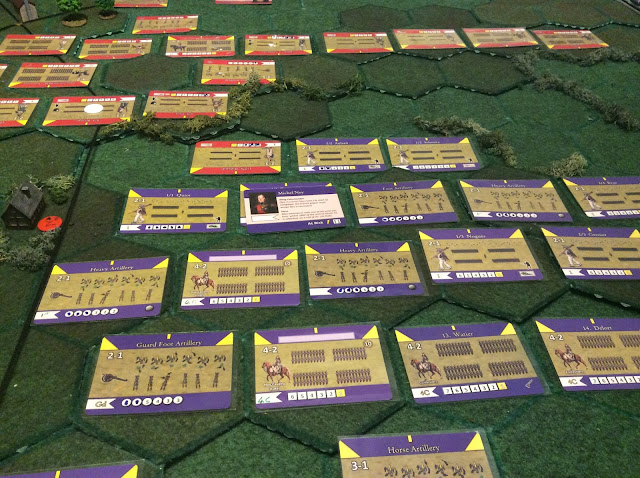 After an initial artillery bombardment by the 'Grand Battery' D'Erlon's attack goes in. 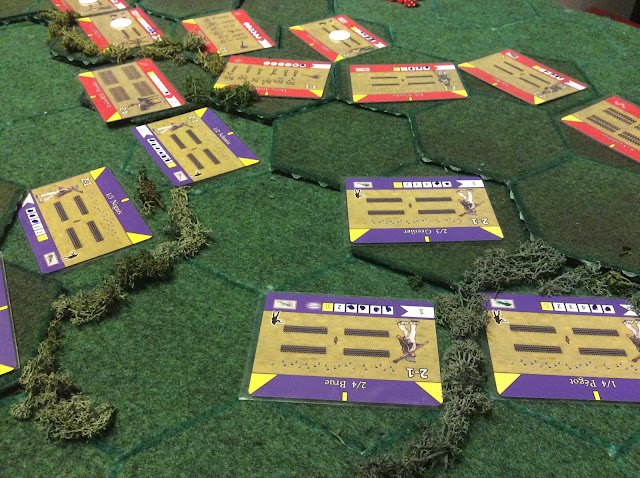 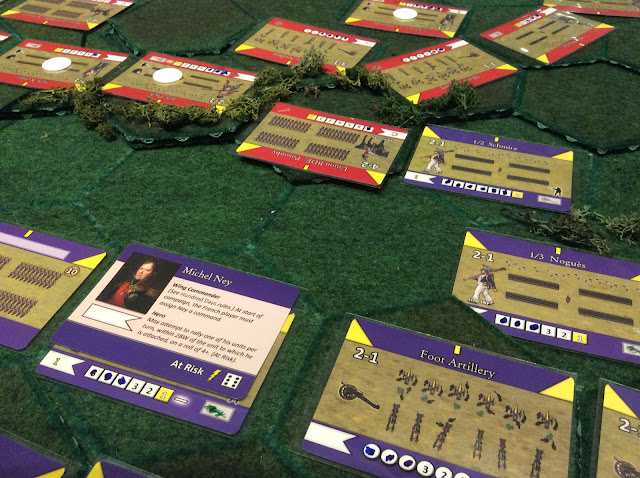 After taking heavy casualties the attack is repulsed, even the Union Brigade had a charge. 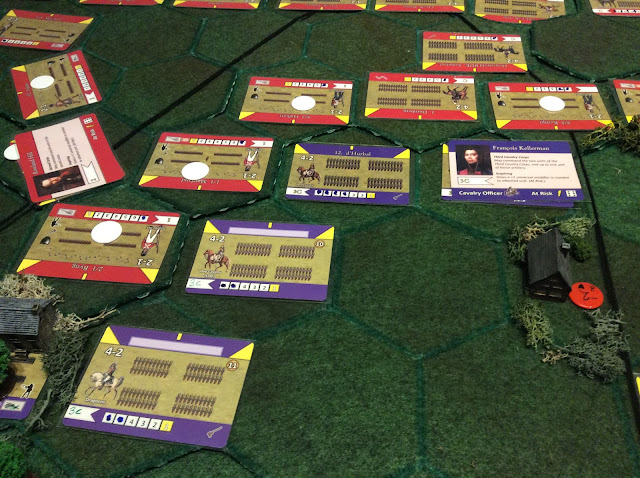 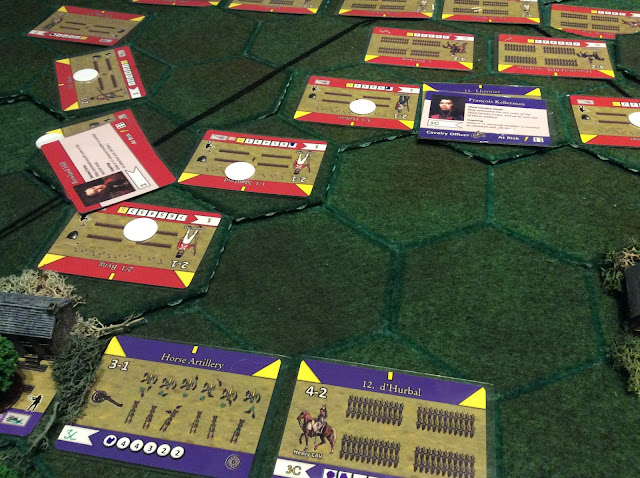 The charge of the French cavalry, you can see that each British brigade has paid a point to have a 'prepared' (white) marker on it i.e. in square or refused flanks etc. all cavalry attacking must halve the number of dice. 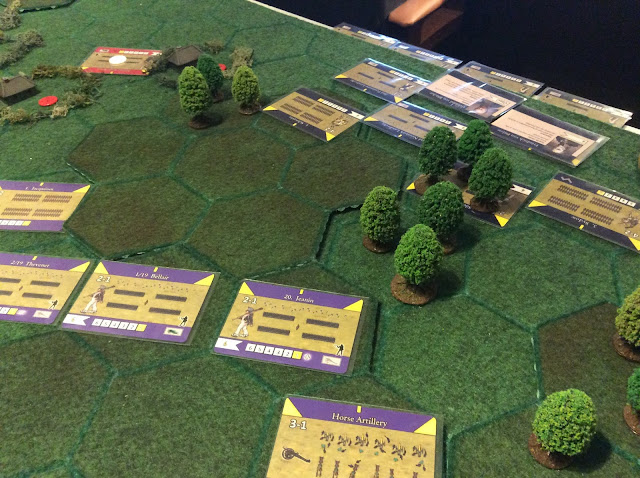 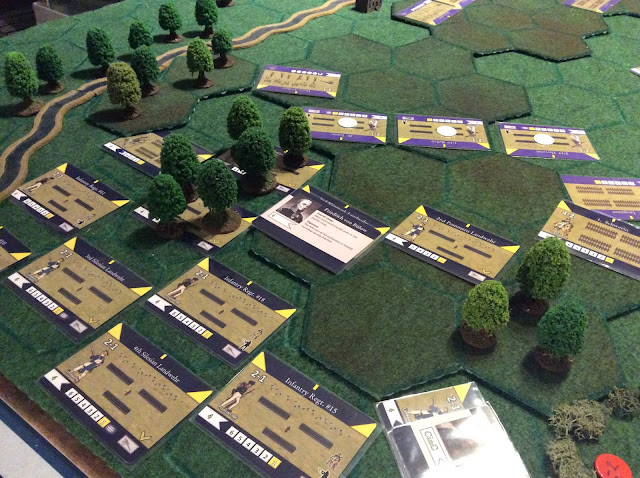 Prussian 4th corp arrive and the French 6th corp have moved to cover their right flank. After I remembered the rule about reserve movement that is, Neal did give me some stick about that! 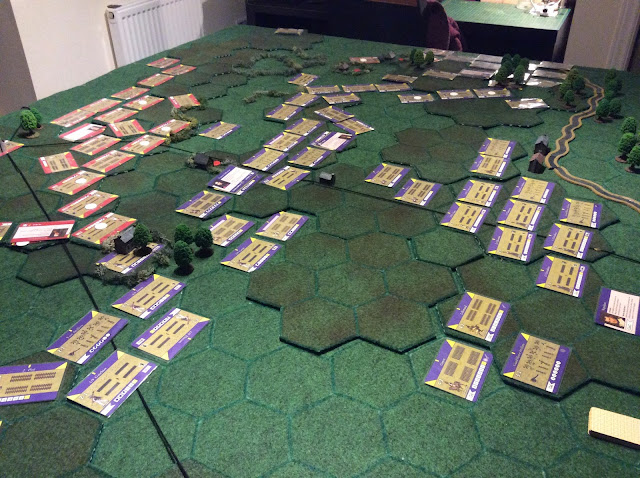 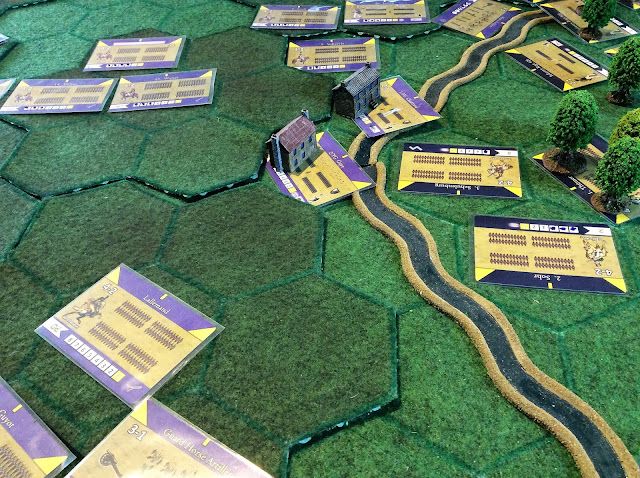 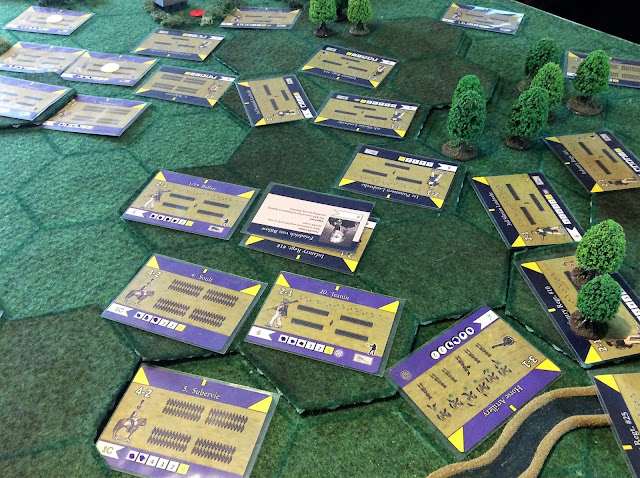 Prussian 2nd corps by passing Plancenoit and pressing the French. 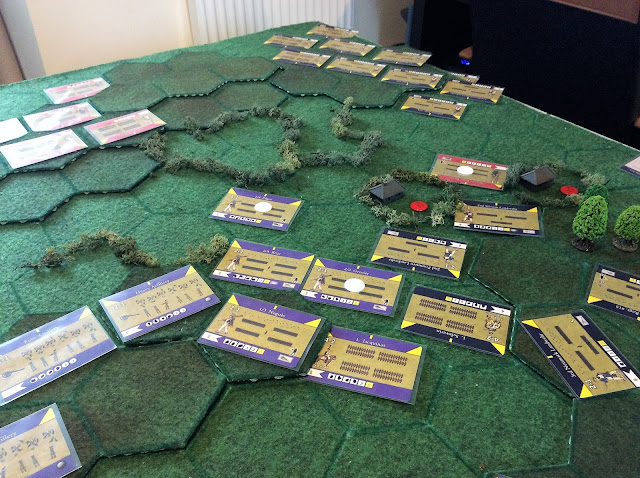 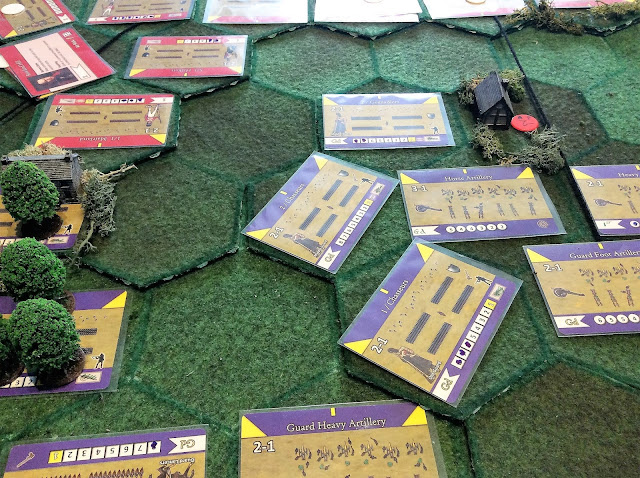 The Guard preparing to attack. 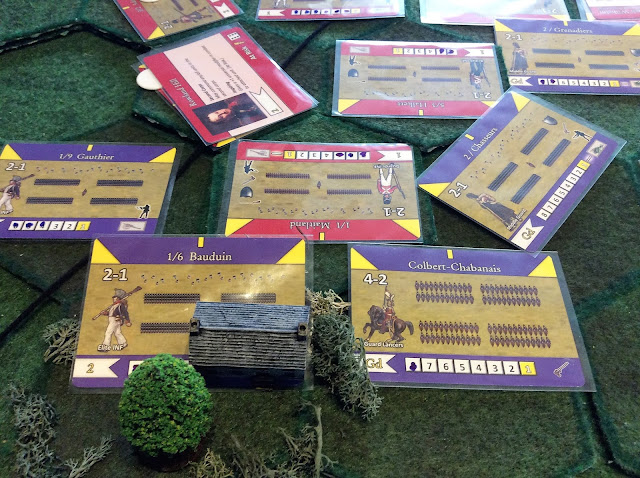 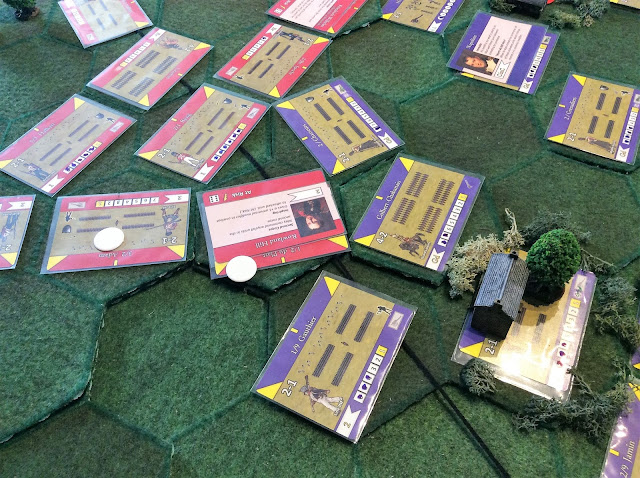 Partially successful forcing the British back off the ridge, they still had reserves though.

Now I'm going to stop there and discuss where I went wrong. 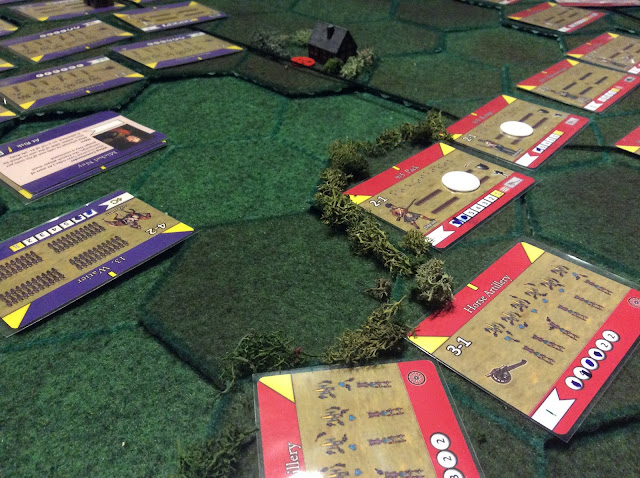 This photograph shows lichen marking the sunken road. I made it as a difficult obstacle taking one full move to get over, too much, for the scale of game we are looking at it made the French sit there for a full turn and get plastered by musketry before they had a chance to get in.

The ridge itself halved the number of dice which could be thrown by the firing grand battery which loses effectiveness as the turns progress, again I would do away with this rule. The allied brigades were hardly touched, I know some people will say that the reverse slope did protect the allied infantry but during the whole day Wellington had to replace units as they got worn down with those held in reserve, this didn't happen in the game and the infantry was hardly scratched.

The biggest cock up I made was to use too few movement dice for both sides, I gave each 4 dice, far too few with the French in particular simply not being able to do what they did on the day. I should have taken notice of one of the OOB's put up on the Blucher forum which gives the French 7 dice, the British 5 and additional dice added as the Prussians arrive. When I did this half way through the game it made a tremendous difference.

Hey it was a learning experience, I still like the way the rules play out, it's worth the effort once you get your head around the apparent lack of detail and the scale of what is going on. Your not manoeuvring individual battalions here and you must remember that and I do think that when I get the 10mm French and Russian brigades painted up it will make a huge difference to the look of the thing.
Dave.
Posted by Dave Huntley (sheepman) at 06:25 1 comment:

I painted the first six figures for the 15th about eight years ago and as with my ongoing policy of finishing things off I sent away to Front Rank for another six to make up a usable unit. Now it's a good job that the Duke didn't have to wait that long for his reinforcements to arrive, he may have had something to say about it!
The difficulty I faced is that my painting style has changed somewhat over the years and that the original figures had weathered a bit with the colours being slightly dulled, so both had to be matched with the new figures. You can tell the difference, but not by much.
Front Rank figures, like all manufacturers have their advantages and disadvantages. The detail is fantastic, everything is there that needs to be, they are fairly chunky, not terrible but the lads have not had their rations cut during the campaign but they are rather stiff not allot of movement if you know what I mean, I don't mind but I have a preference for a bit more swash buckle if you get my drift!
Because of the detail on the figure they were a joy to paint though as you will see from the pictures the red teeth? on the horse blanket aren't there when they should be. I know, lazy bugger but hey ho lots of things to do and the horses are generic light so this wasn't sculpted on, it's my excuse and I'm sticking to it.
Photos: 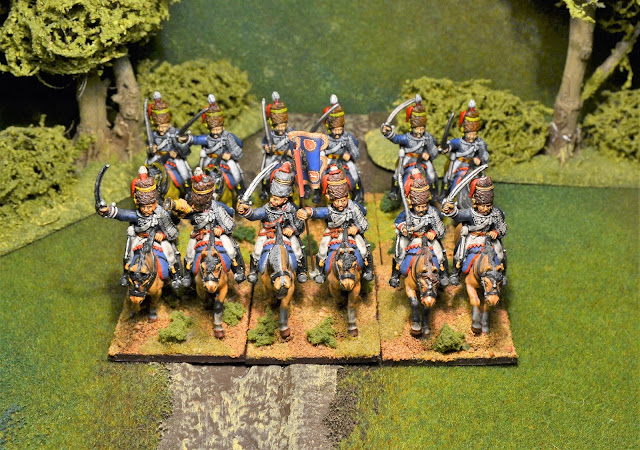 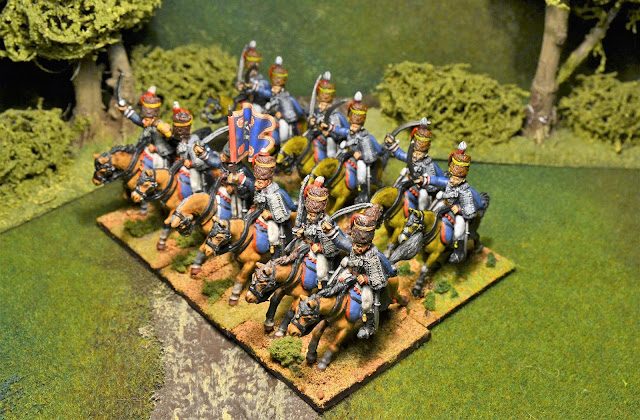 This is the original squadron: 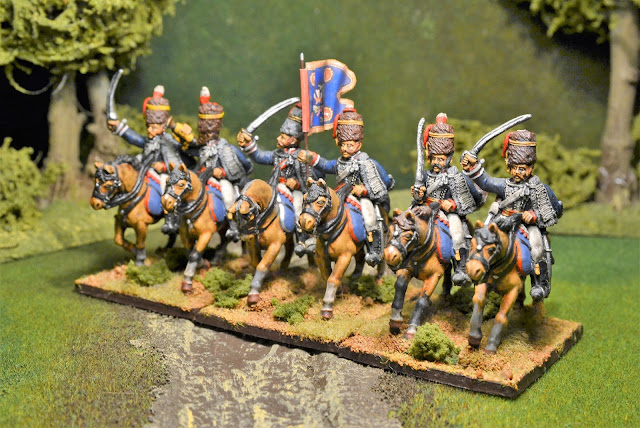 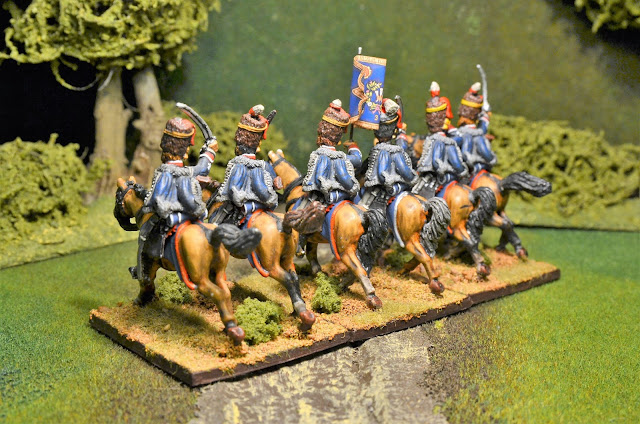 While this is the reinforcement: 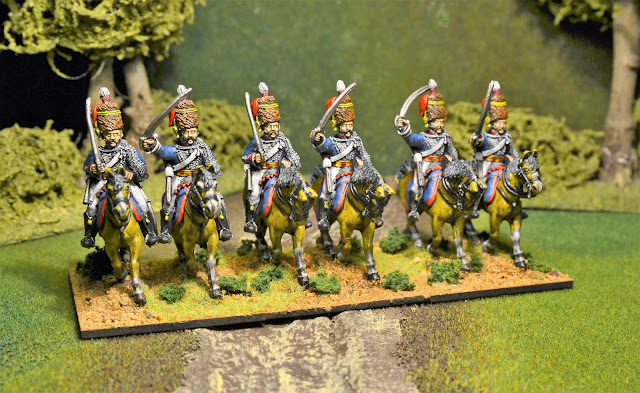 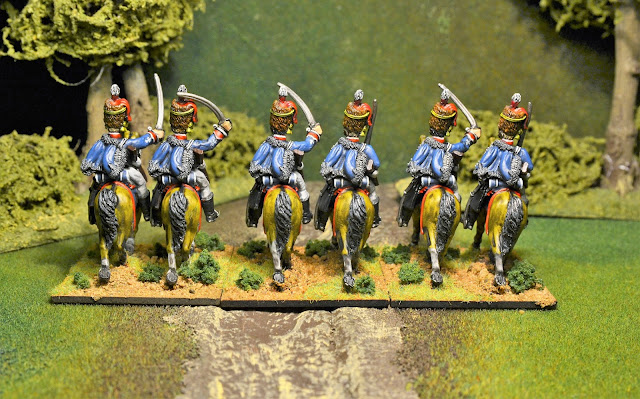 Along with the rest of my peninsular stuff they will be a great addition to some of the large 28mm Nap games at the club or here using Sharp Practise.
Dave.
Posted by Dave Huntley (sheepman) at 08:32 8 comments: