An evening at the club and more Frenchmen (on both sides) bite the dust. A venture into the Vendee 1794 resulting in another entertaining encounter to find out which of the two forces was the worst a historical fact born out during the game.
The scenario was that Republican recruits had been hastily raised and thrown into the hotbed of counter revolution in the Vendee region of France  in order to crush the Catholic, Royalist supporters of the Dauphin  had occupied a defensive position near the junction of two roads along which advanced two brigades of Republican infantry under General Augereau.
The rules used were General De Brigade. All troops other than the Republican combined Grenadier battalion (veteran) and half battery of 6lb guns (line) were conscript class, while the Royalist Chouan were also conscript. The consequences of having such brittle troops on both sides would soon be seen!

A view of the field and the Republican right wing advance: 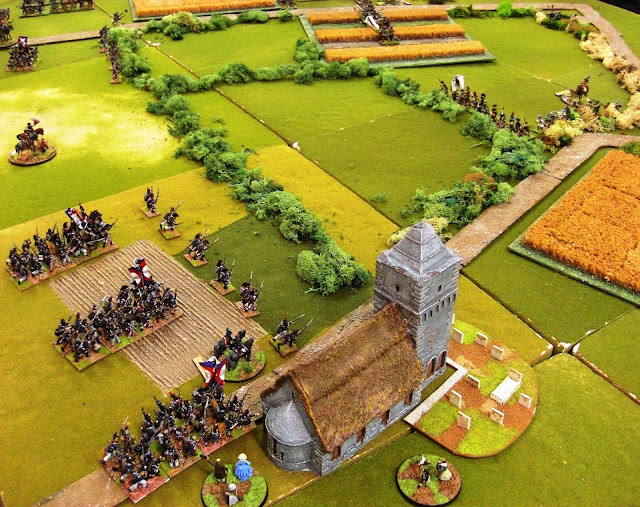 And the Royalist (musket armed) infantry lining the thick hedgerow ready to throw back the 'Infernal columns': 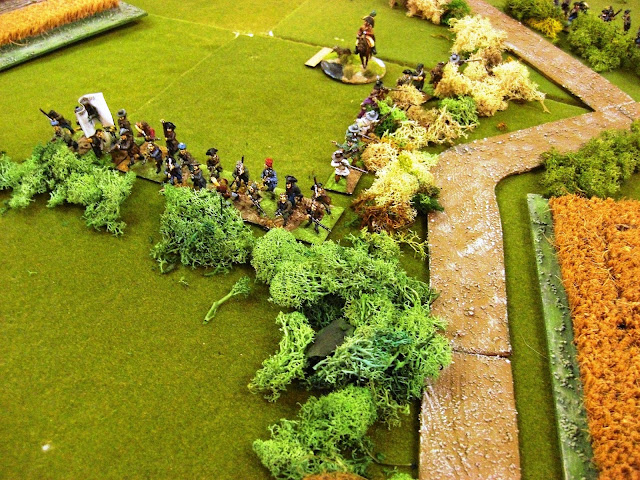 Two views of the right hand Republican brigade beginning it's attack, the combined Grenadier battalion can be seen in the center of the first picture. Note also the Representative of the People, there to 'motivate' the columns in their assault!: 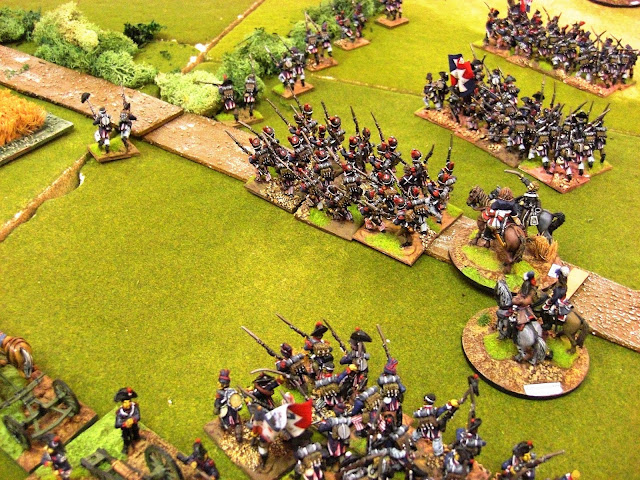 The Chouan defensive position on this wing had very little cover (other than line of sight restriction through the cornfield), and boy would it make a difference! The troops behind are armed (like many in the army) with scythes, and pitchforks.
This picture also shows off the Grand Manor windmill very well, a lovely bit of kit which typifies a Revolutionary battlefield: 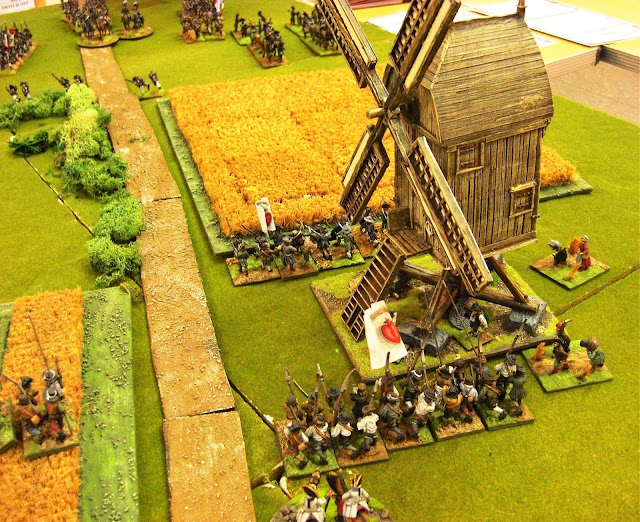 The two Republican battalions formed line and quickly advanced through the cornfield taking desultory fire from the Royalist formation to their front. They had deployed into a loose formation (Grand Band) in order to reduce the effect of the Republican fire, however the Republicans had no intention of engaging in a fire fight, they would get stuck straight in: 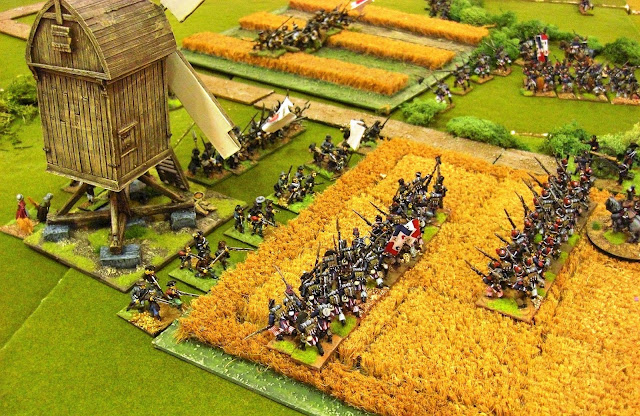 With a poor closing volley from the Chouan infantry (not helped by the fact that they had fired the turn before and thereby suffered a minus two on the die roll) the result with them in loose order was inevitable, a rout ensued which results in a test for units within twelve inches and a Brigade moral test at the end of the turn. The Royalist general promptly threw four, which, with various deductions resulted in the Royalist brigade retiring eighteen inches in the next compulsory phase: 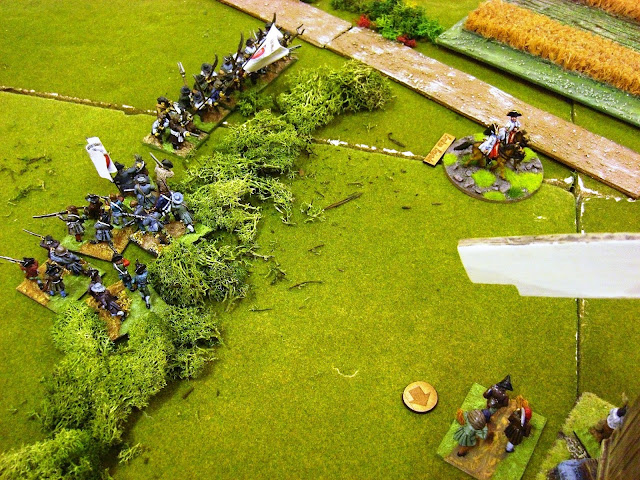 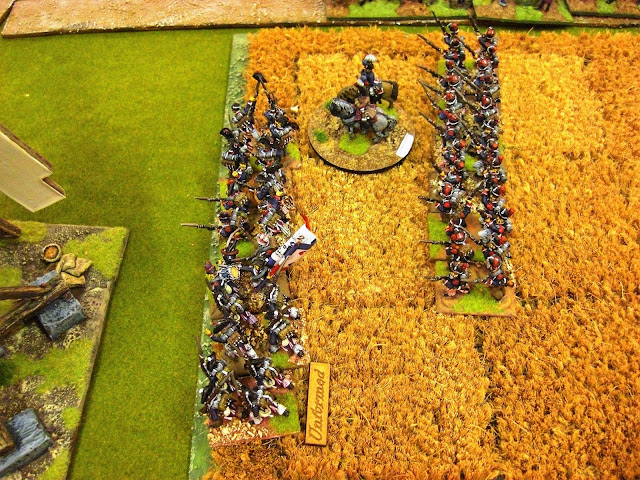 Back on the right center of the Republican attack the second Brigade advanced confidently. Fighting (after suitable delays) through the thick hedgerow however disrupted both the timing of the attacks and the formation of the attackers. This resulted in the assault going in piecemeal and the defenders were ready. A couple of devastating volleys from point blank range wiped out the front ranks of the Republican conscripts (three casualties in one turn causing an immediate moral test) and as on the opposite side of the table the Republican Brigade fell back eighteen inches to lick it's wounds: 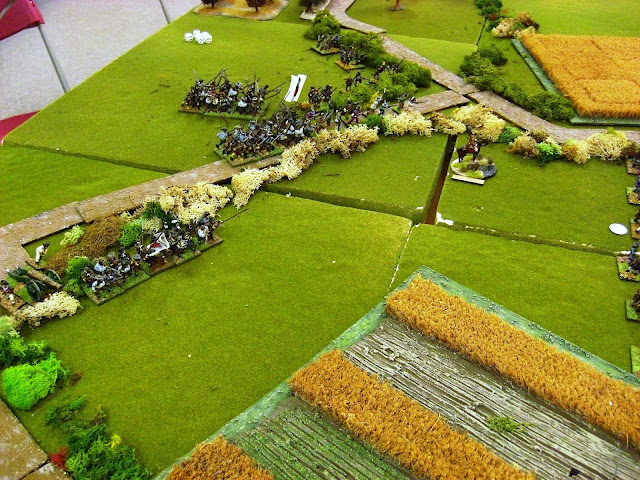 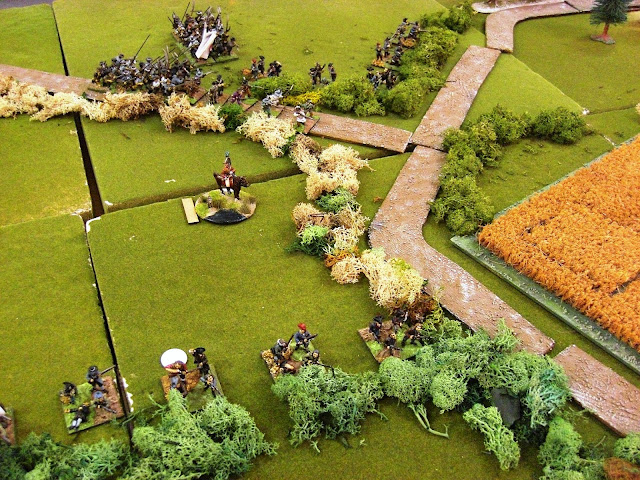 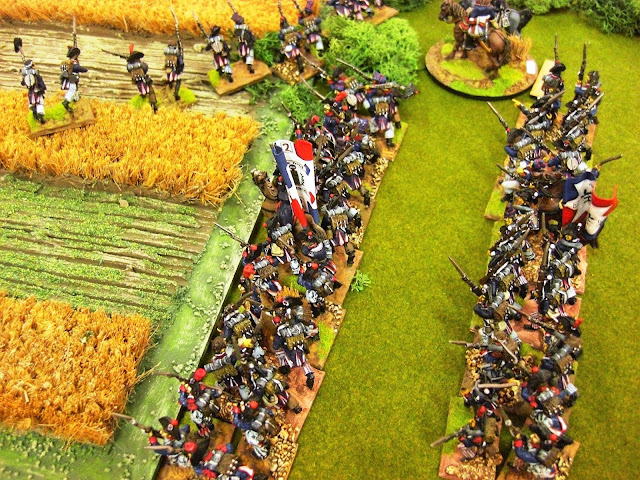 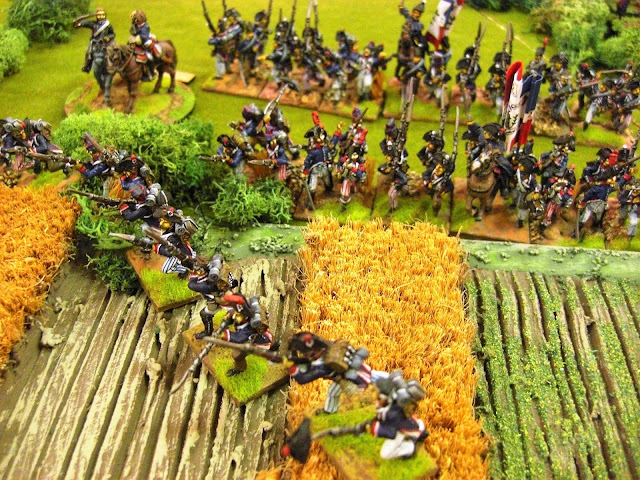 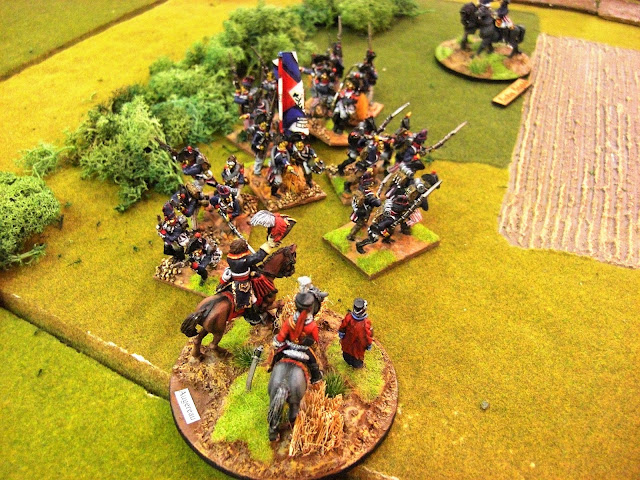 After a second lousy die roll the right hand Royalist brigade dispersed leaving the reserve to try to march over to plug the gap: 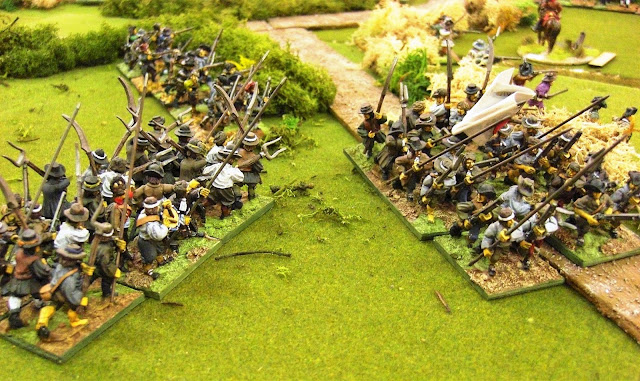 This was about the end, the Chouan troops would be too stretched to cover the gaps in the line while the Republicans poured round the exposed flank and the second brigade rallying to resume the advance.
Once again a good game with a great set of rules, everyone seemed to enjoy it so job done.
If interested you can find a bit more info on this link on this blog, and on Wikipedia here.
If I can get round to it I would like to add a small unit of Royalist cavalry, I will have to keep on the lookout for suitable figures!
Hope you enjoyed the ramblings.
Dave
Posted by Dave Huntley (sheepman) at 13:02