Someone has got that lady, Piedemont 1795 part II.

Another Tuesday night, Neal popped over so another couple of rounds of Sharp Practice II.
As you will recall those Frenchy Rev chaps had rescued their elusive spy Contessa de Knickerbocka from the clutches of the dastardly Austrian cads who were about to have their way with her (not that she would have minded) and were now making a dash for the other end of the table with the Contessa in tow.
The Austrians under Oberstleutnant Von Strumpa were now marching as fast as they could down the road to intercept with Sgt shit me pants (read previous post for reason) regaining some of his courage and chivying his men along behind the French. 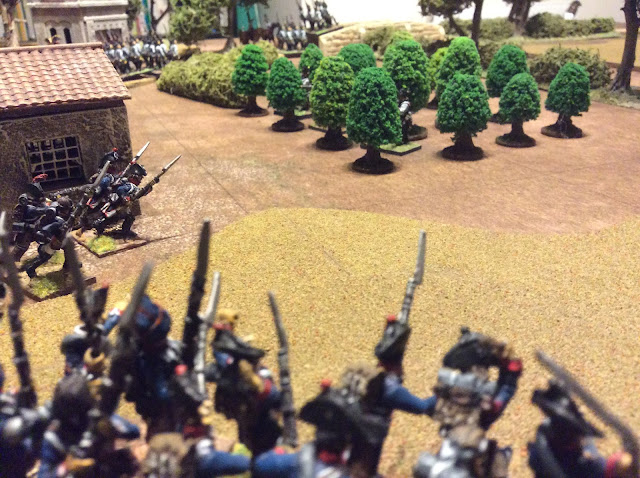 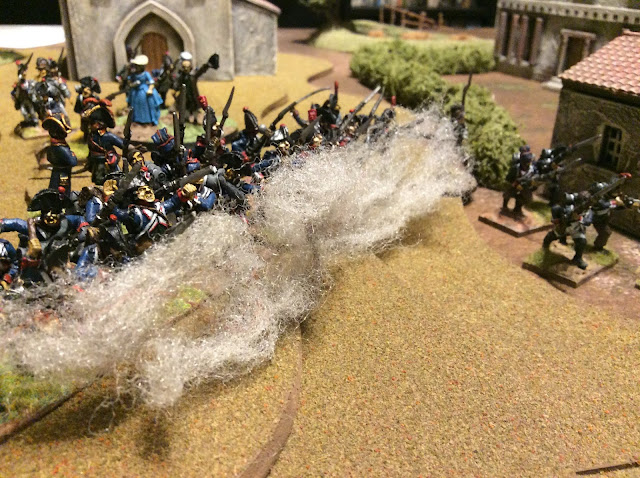 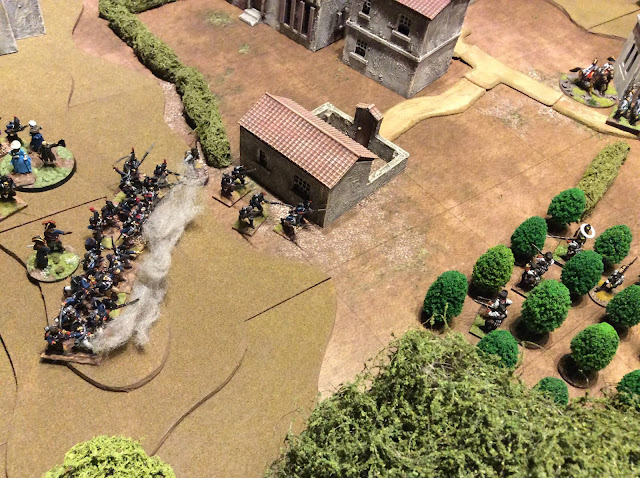 Under orders from their intrepid leader Sous lieutenant Camembert, otherwise known as 'The big Cheese' (WARNING, references to Carry on Don't Lose Your Head will be ongoing) a volley crashed into the Austrian skirmishers which even given that the French required 6's to kill and 5's to cause 'shock' still toppled two of their opponents. 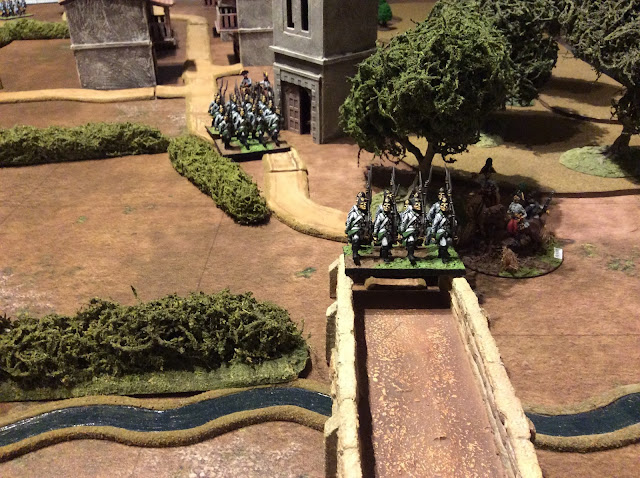 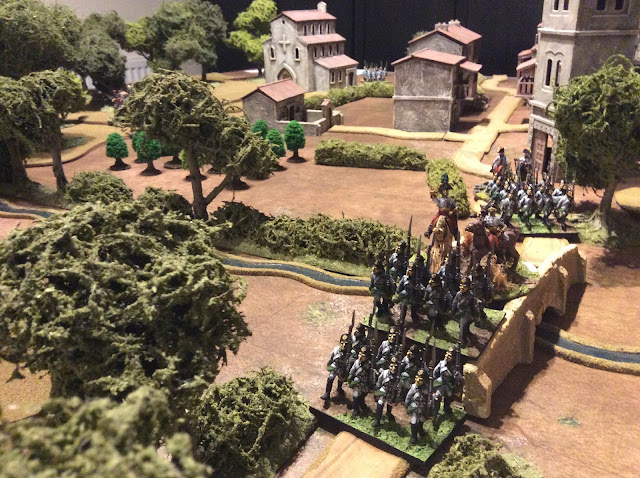 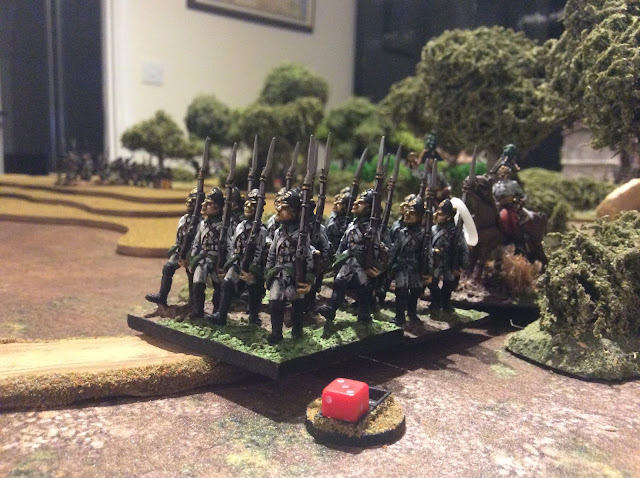 The brave but somewhat stiff upper necked Austrian infantry do a marvellous balancing act as they rapidly march down the road and over the bridge to out flank and cut off the French.
Elite figures are great but they all stare up into the air as if someone has just broken wind! 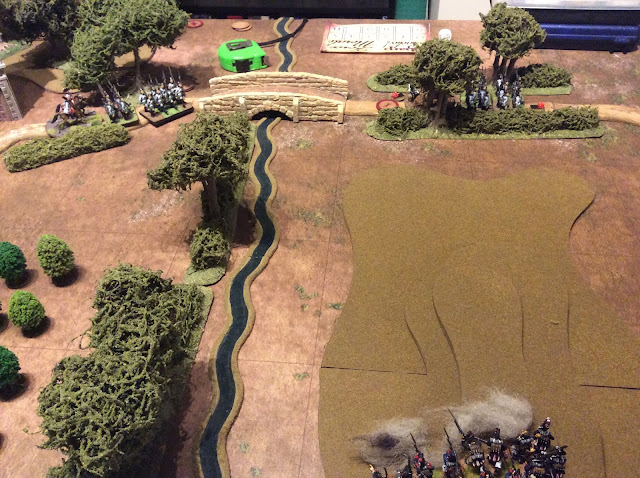 A volley from the French rearguard did some damage but Oberstleutnant Von Strumpa soon rallied most that off. 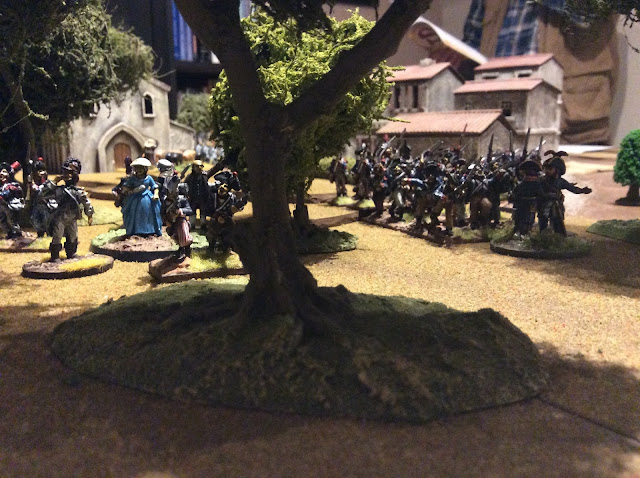 A view of the French escorting the Contessa through the woods heading towards safety. Very scenic look about this masterpiece of photography and quite ruined by Neal's Land of the Giants impression in the background. 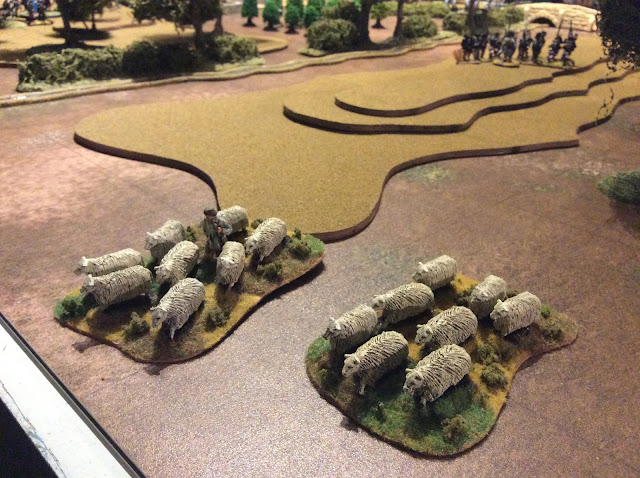 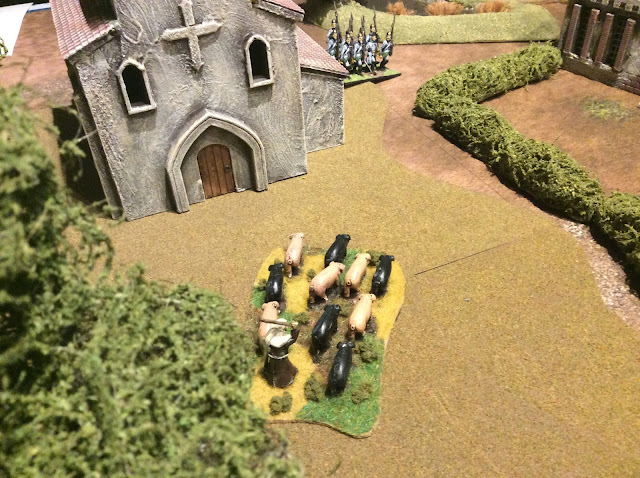 We even drew tokens for the movement of the livestock, the sheep immediately headed off towards the edge of the table. Sheep never were very bright, that's coming from an ex farmer, whilst the pigs with due revolutionary fervour charged directly for Sgt shitty pants. How will he react? will it be bacon for supper or will the Austrians get the pork chop!
Same time, same place, same channel folks.
Dave.
P.S. buildings by Empires at War people have been asking.
Posted by Dave Huntley (sheepman) at 12:16 4 comments:

Everyone wants that lady. Piedemont 1795


I will state from the start that I was not a great fancier of skirmish wargames, but and of course there's always a but, Sharp Practice II Two Fat Lardies has convinced me otherwise.
Neal and I played a couple of games using his War of 1812 15mm figures Here and loved it, you do feel as if you are on the spot as it were. So next game at my place and as it was a while since my French /Austrian revolutionary war ( the European one that is) had been on the table we decided to give it a blast.
Scenario objectives, The Contessa de Knickerbocka, known to her friends as 'bury me in a Y shaped coffin Lill' had been abducted by some dastardly Austrian fiends for their own evil ends and was being held in a church near the village of Barolo in northern Piedemont along with her elderly husband, who hadn't got a clue why his bandy legged wife was so popular with the soldier boys!
During her, 'associations', with the Austrians the Countessa had obtained a great deal of information as to the positions of the Austrian armies prior the the commencement of the 1795 campaign in northern Italy. The Revolutionary Council had decreed that she was to be liberated from the Austrians at once and to that end a French force was sent post haste to rescue her. 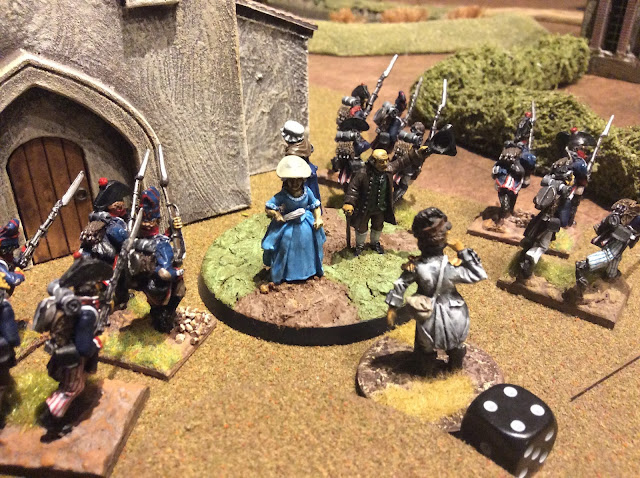 The Contessa de Knickerbocka was being held inside the church by a group of eight regular Austrian line infantry led by Sgt 'shit me pants', we know he was called that because when the French arrived at the church, hammered on the door Neal's caricature reaction dice roll meant he shit his pants and legged it out the rear entrance along with his men! 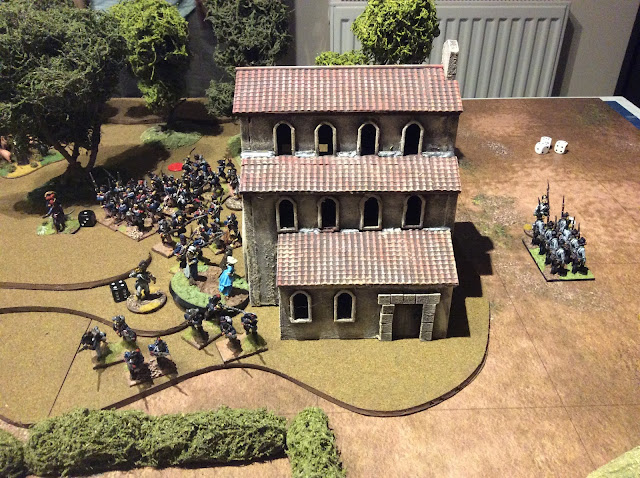 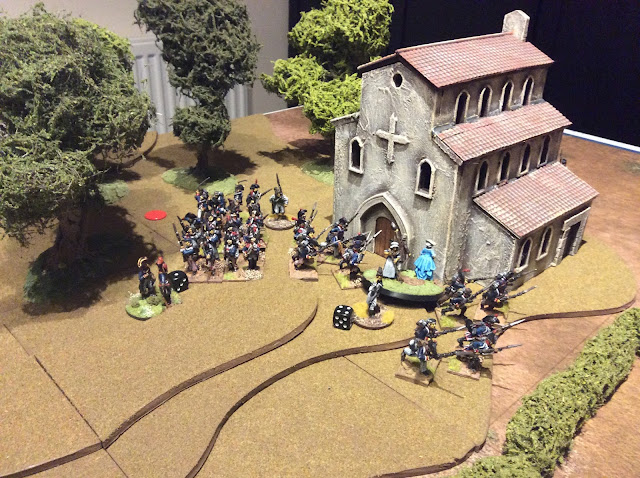 The red marker shows one of the French deployment zones, the other was to the left of the photo. The French had to escort the Countessa off the table to win the game. 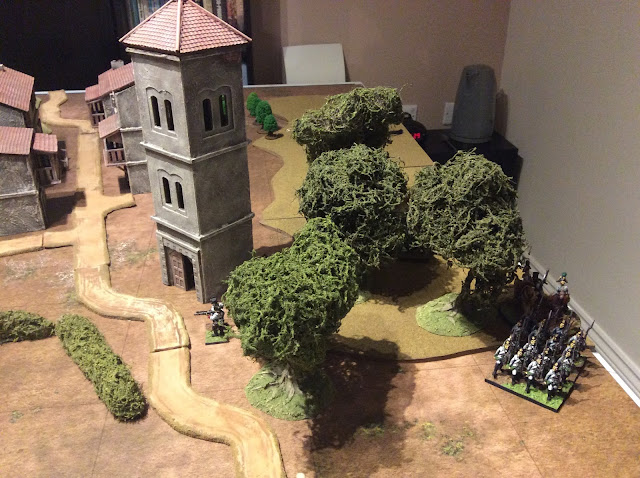 The Austrian deployment zone was just in those woods. 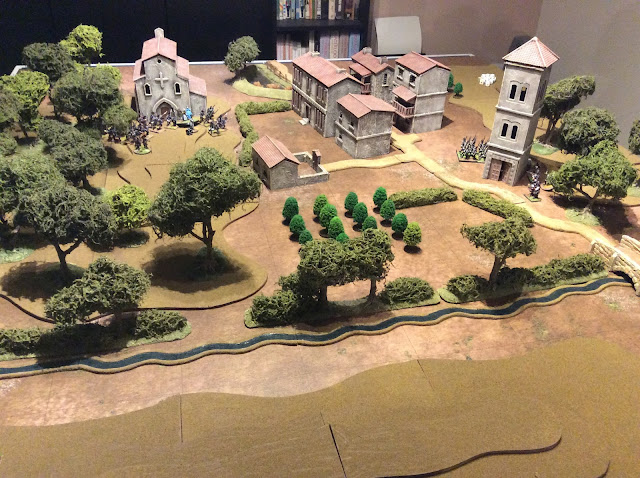 The French must get to the bottom of the table where a small relief force is marching onto the hill in the foreground. 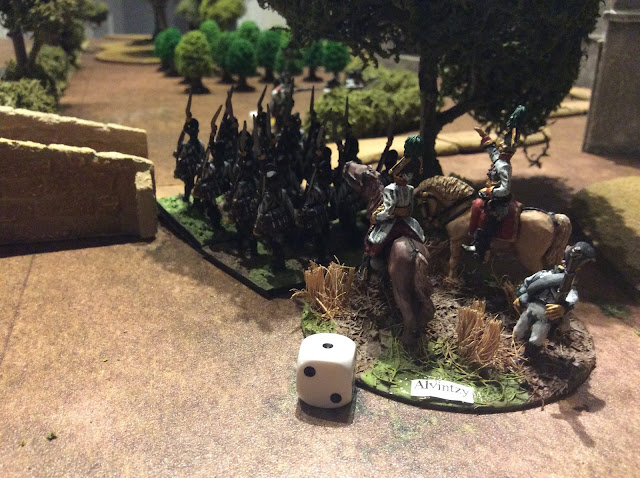 The Austrian column is about to cross the bridge in order to intercept the retreating French. 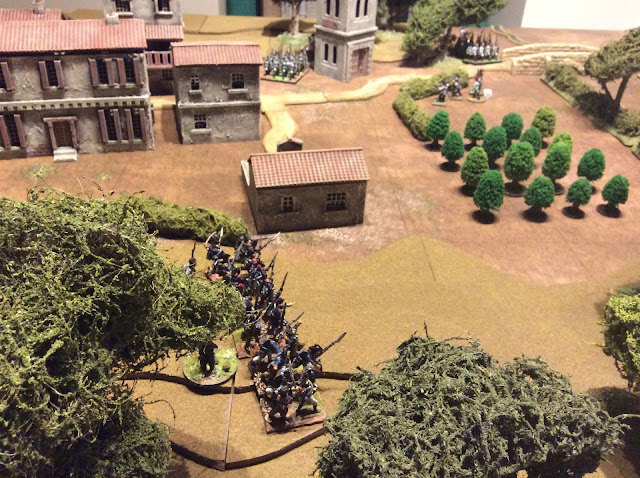 The French escorting column (three squads) deploys into line before wheeling to their left to cover the withdrawal. The Austrians can be seen marching to intercept them. 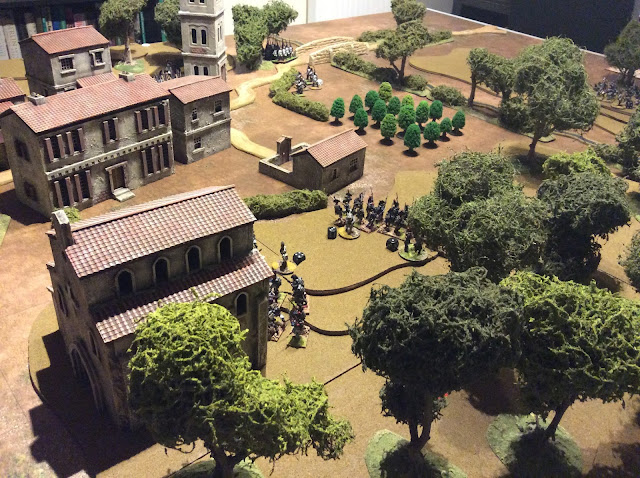 A final view of the battlefield for this week, in the top right of the photo you can see the French relief column arriving but the bloody skirmishers escorting the Countessa wouldn't move - eyeing her up no doubt!

Neal will be back on Tuesday and we will see what happens then. Same time, same place, same channel folks.
Dave.
Posted by Dave Huntley (sheepman) at 03:40 11 comments: