Well, here we go. This dear reader is not actually the start of a new project but is, as regular (if there are any) observers of this modest blog will know a refurbishment of one of my first wargame passions, the French Revolution.
The collection was first begun about twenty years ago, long before Eureka brought out their very comprehensive range, so it was mainly Old Glory bicorn French with rather shorter coat tails and hair than I would have wished but beggars can't be choosers as they say. No don't get me wrong, I'm not chucking out the baby with the bathwater so the French aren't going to be changed completely but her are a few things that are, eventually going to take place.

1.) The Vendee infantry will be grouped into units of ten each so that they can be used for Sharp Practice as well as other rules so a bit of re-basing.
2). French standard bearers will have their 1795 flags carefully removed to be replaced with small hollow tubing allowing earlier and later period flags to be slid in according to which period of the revolution is being depicted.
3). To that same end voltigures for the line battalions early empire green coated lights for early rev and side plumed shako light infantry for the consular period to be added.
4). Two regiments of horse by Elite figures will be replaced with Eureka figures. Elite are great but just too big at 30mm, you can get away with the infantry but not cavalry, they look huge, so the Elite will be sold once the replacements are done.
5). The Austrian artillery need proper guns, the ones there are make do and look crap, while their limber drivers need their uniforms darkened to gray instead of white with the turn ups on their hats shaved off and the brims rounded off with green stuff. As they stand they represent 1805 onwards.
6). The Consular onwards French limber drivers need to come off their horses so that I can paint up civilian drivers for the rev period and use both. Now this wont be easy as I use Epoxy steel glue, the sort you mix two different tubes together to get a strong fix so any suggestions would be welcome. I don't want to damage either the limbers or riders, so good luck with that Dave!
7). Other than that just add to the various infantry of both sides so that larger forces are available.
Not much to do then but one must start somewhere so for a bit of inspiration I dug out an old Foundry guillotine set that had been lying around, the cotton used for rope is a bit thin and I may try toughening it up by painting it with PVA, we'll see: 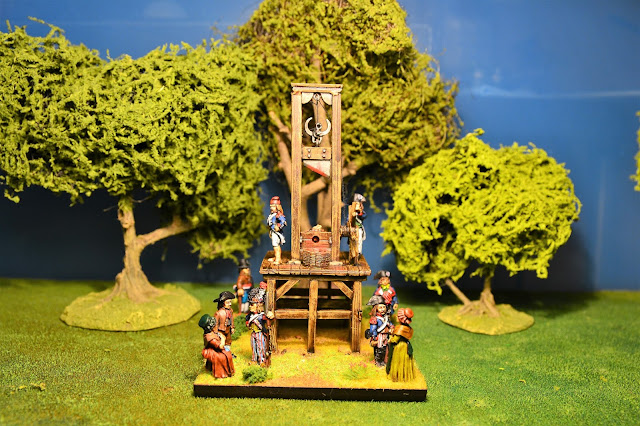 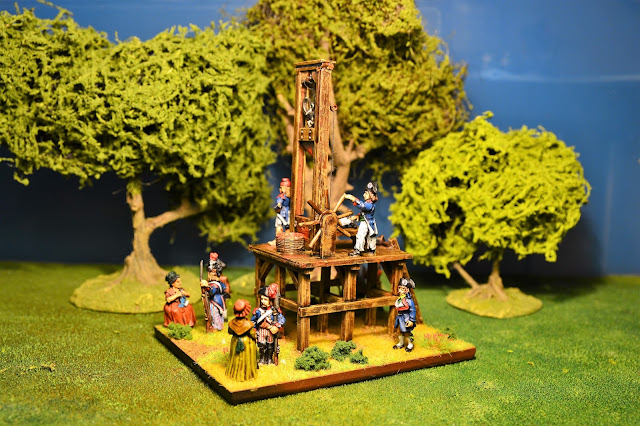 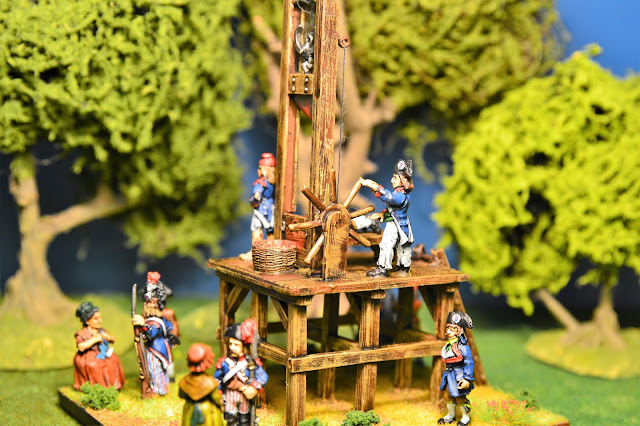 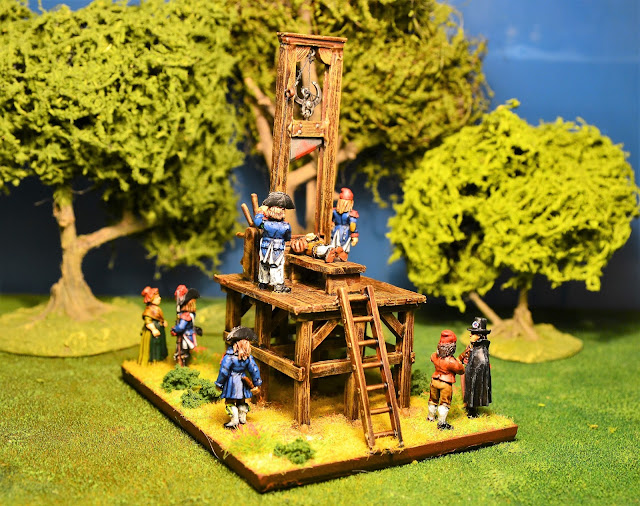 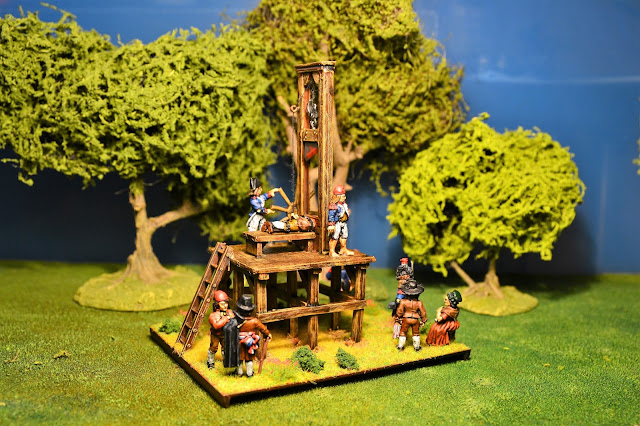 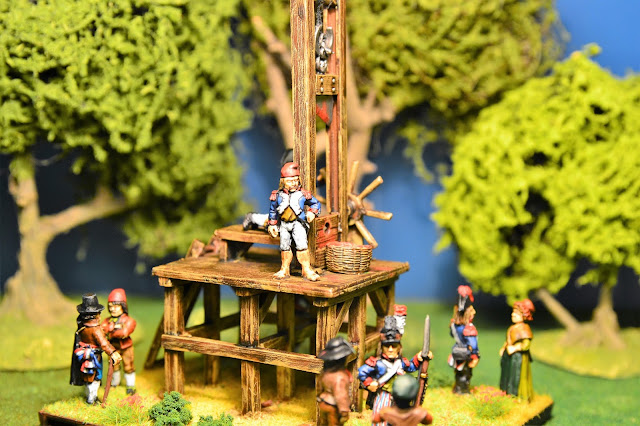 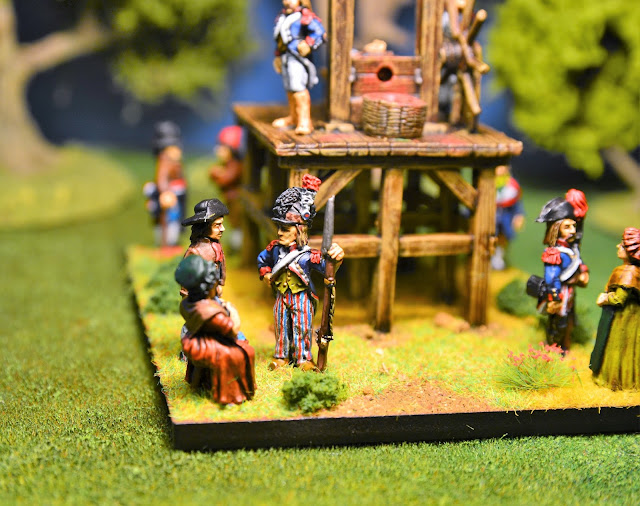 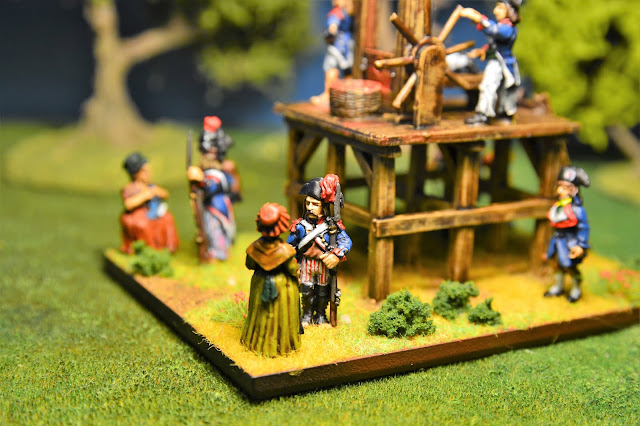 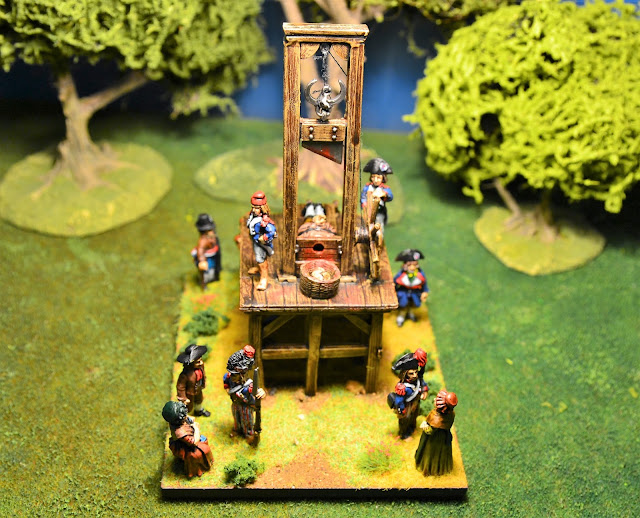 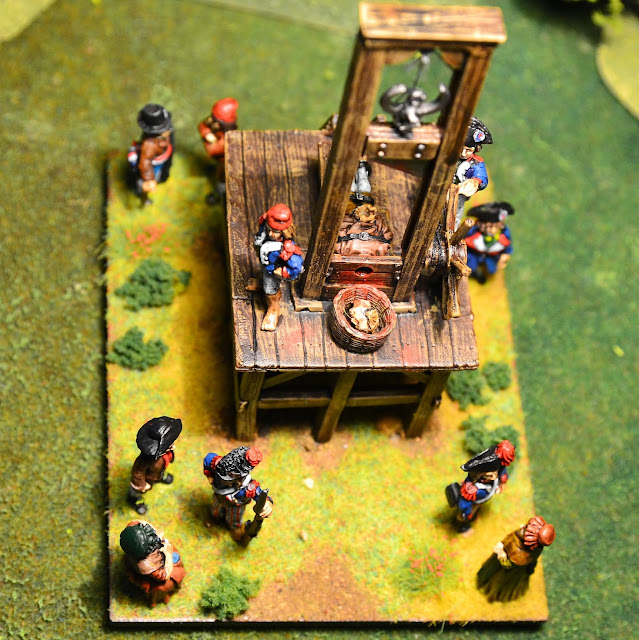 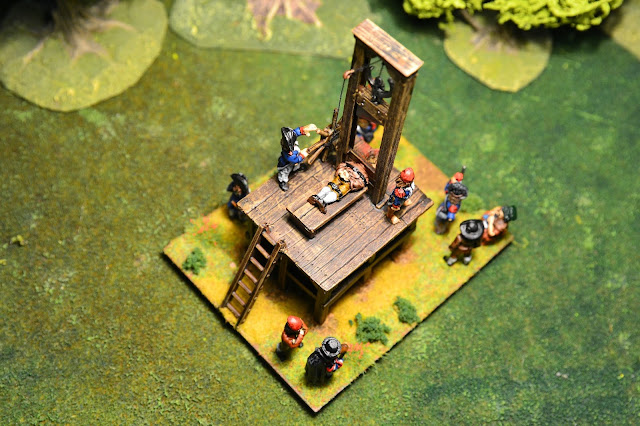 A fairly quick post, these chaps were lying undercoated in a box. So for no other reason than to get them out of the way I painted them up and added them to the collection: 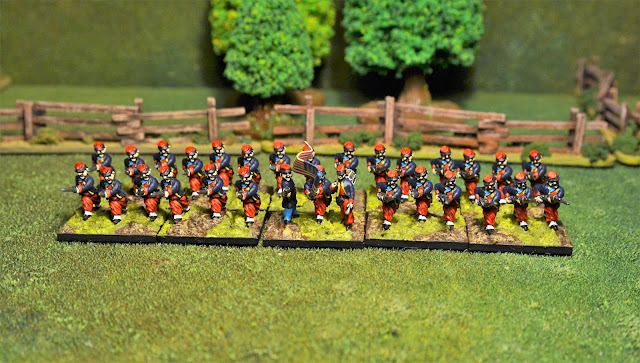 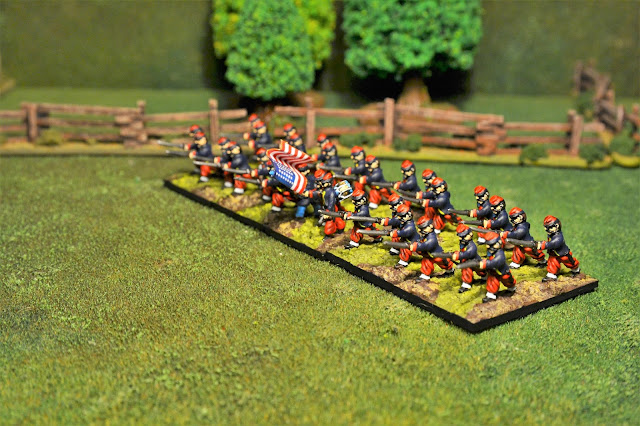 Another one off the list, a Perry's 28mm Prussian 6pdr battery to add to my ongoing Prussian brigade: 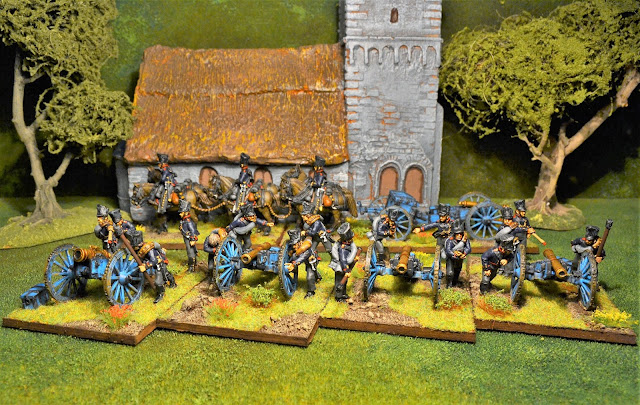 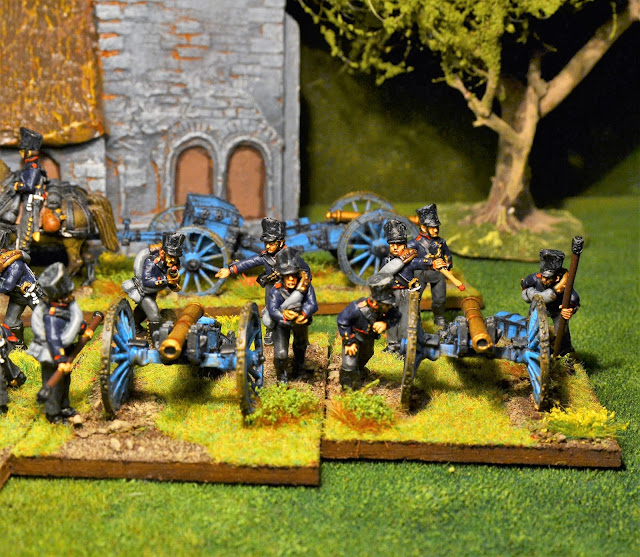 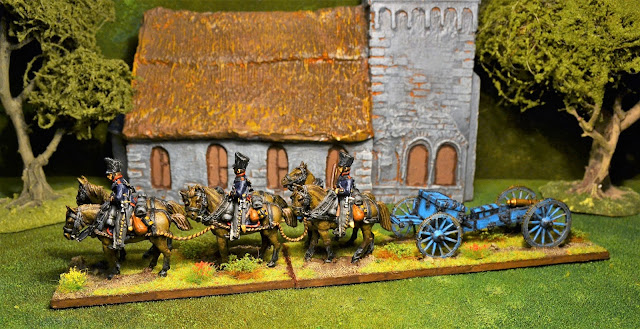 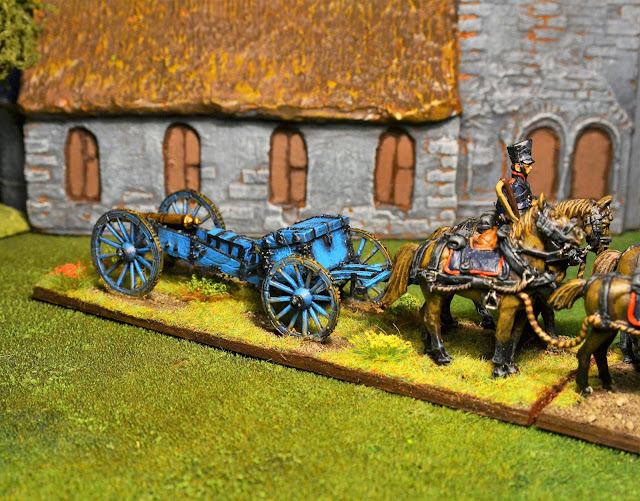 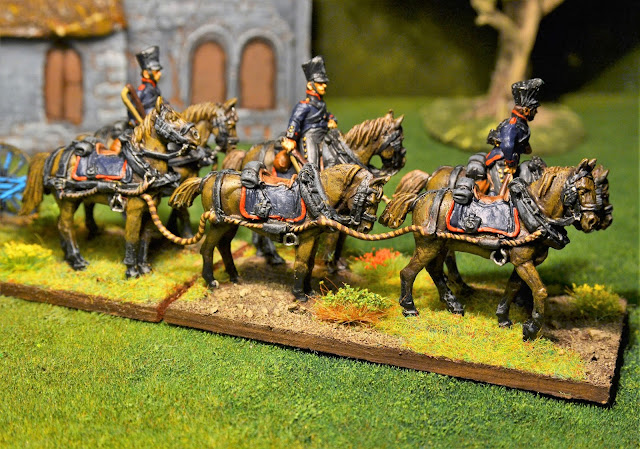 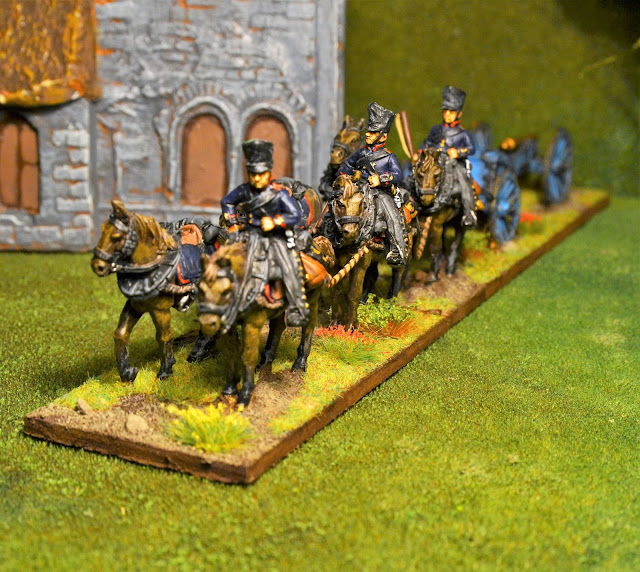 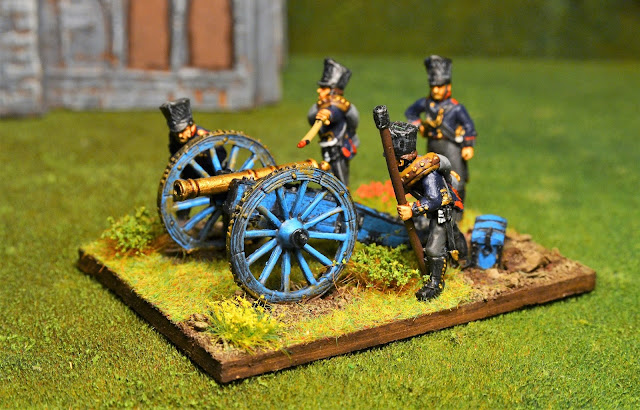 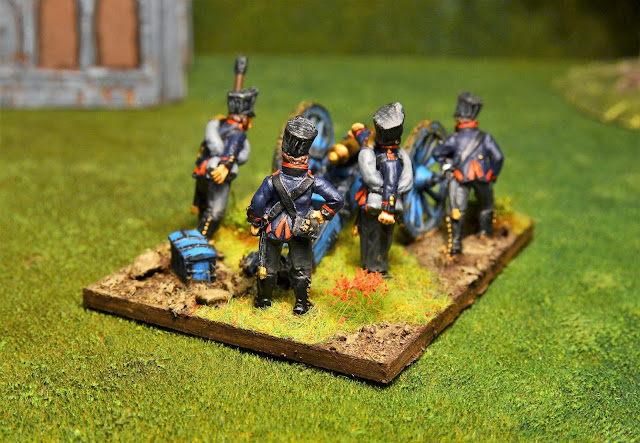 A bit rushed to get them on the blog today so short but sweet!
Next up, some 15mm ACW.
By for now,
Dave.
Posted by Dave Huntley (sheepman) at 06:33 15 comments: