Neal and I met up for our usual Tuesday night game, this time it was another round of French Revolutionary War Sharp Practice with Neal taking the sneaky Republican French while I assumed command of the gallant Austrian forces, no biased here!
As it was 1795 the French were a little better than in previous games having fairly steady line infantry (controlled volley for the first shot only) and good light infantry in the form of two groups of Legere skirmishers while the Austrians had their usual solid line with two groups of third line skirmishers, not as good as their French counterparts.
As you good people can see from this view of the table early in the game it was a pretty straight forward encounter engagement the objective being to capture the enemies deployment point (the Austrian one is next to the road running off the table to the right of the photo) and/or beat seven kinds of doo doo out of the opposition, fairly straight forward there then! 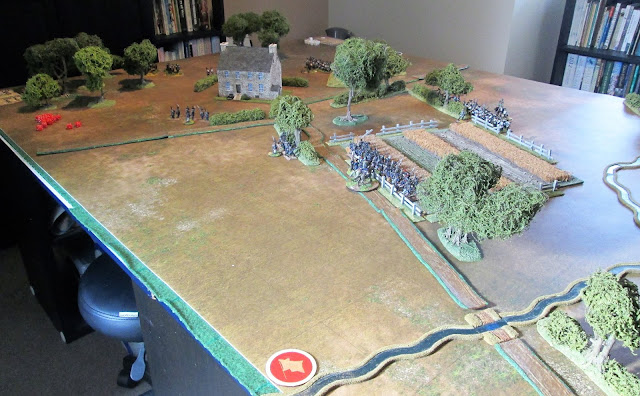 As can be seen above Neal as the French commander was very sensible in keeping his four main groups of line infantry held back together as one formation covering the wheat field whilst at the same time pushing on with his light infantry to harry the more ponderous Austrians. Muggins here split his Austrian line into two formations, lining the fence/hedge with one lot and trying a dastardly flanking manoeuvre with the rest. Needless to say this did not initially pay off as the dopey Oberleutnant Wagner decided to get himself lost (Bad Things Happen table) and was considerably delayed.

The Austrian main force under Haupman Von Trump, Trump by name and trump by nature (a rather flatulent old captain) with his trusty Stabsfeldwebel Gruber, lining the hedge with a skirmish group lead by Korpral Hackle the midget in support. Korpral Hackle you will note is a Foundry figure and somewhat vertically challenged compared to his other men, small but tough. Their French opponents are shown in the last picture. 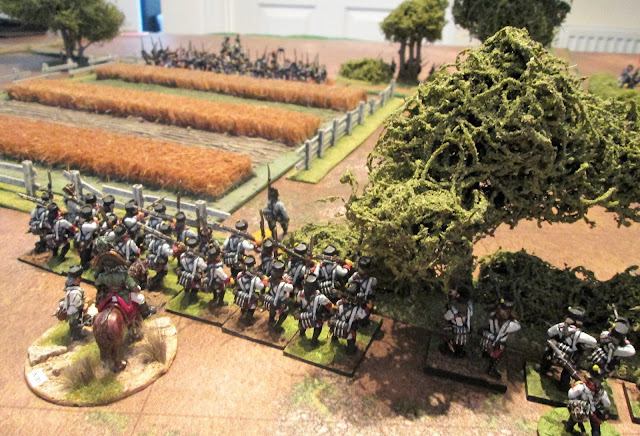 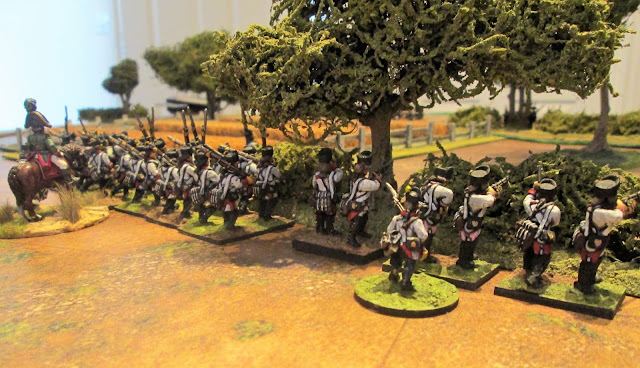 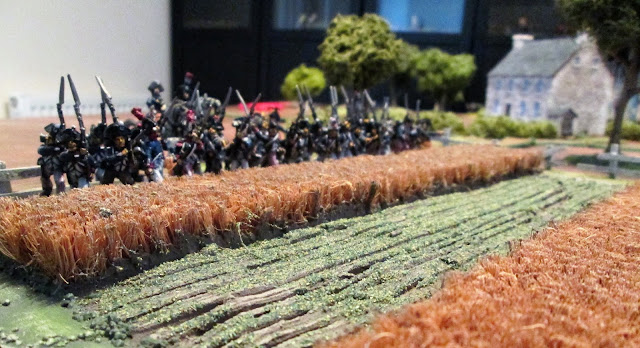 After an initial bloody repulse by the gallant Austrian skirmishers the French light infantry can be seen advancing towards a very expensive looking bit of Flanders real estate which to their consternation they found thoroughly locked up whereupon they skirted the building to take on their Austrian foe. 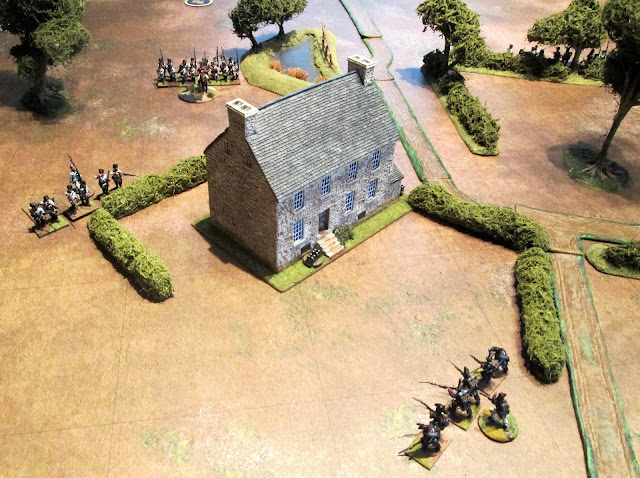 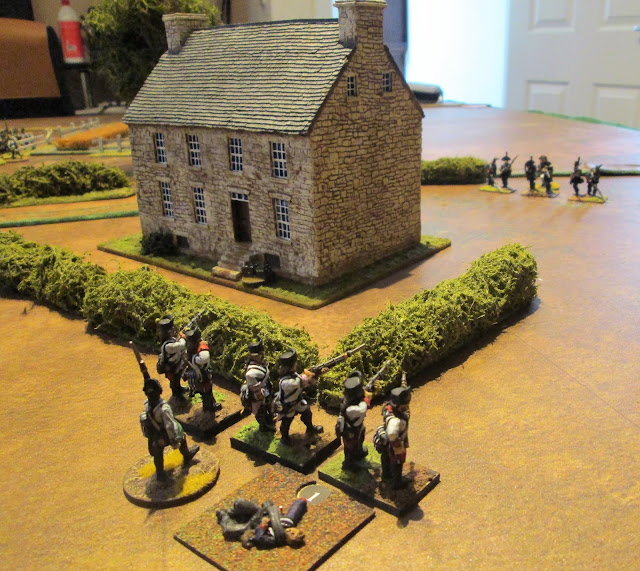 The firefight between the two main bodies of line infantry begins, this was to prove to be a very viscous and bloody affair with heavy loss to both sides, who will prevail? 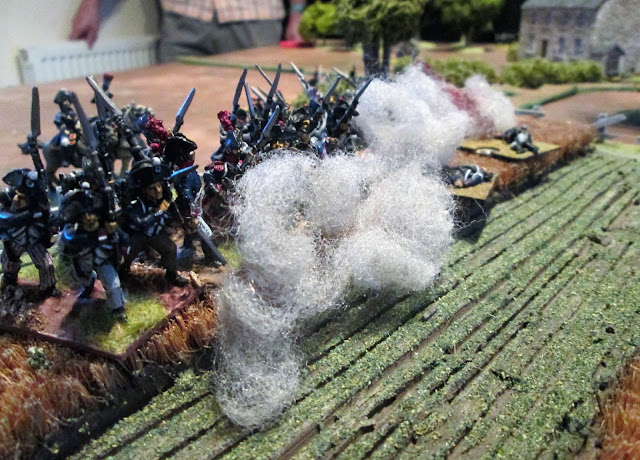 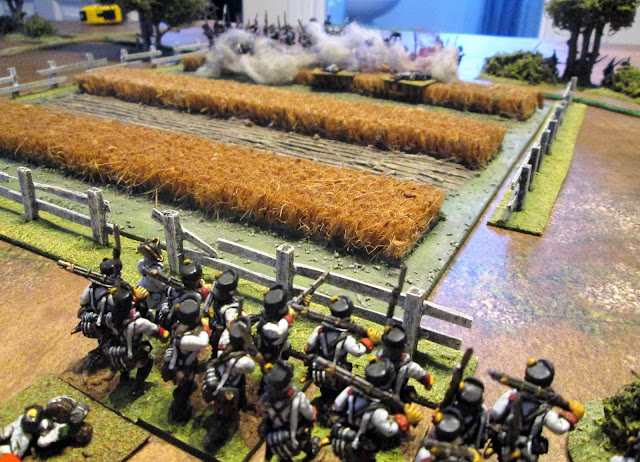 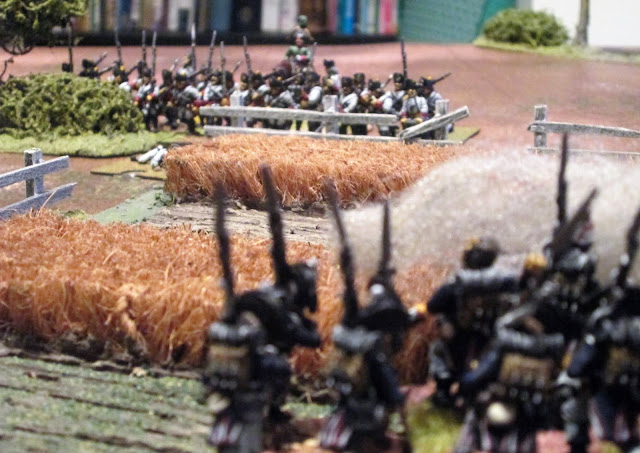 As this firefight was continuing Korpral Hackle the midget and his long legged mates rushed pell mell over the hedge, across the field and way past the French line infantry they were supposed to flank and shoot up. I got over the hedge ok but then forgot to designate were the skirmishers were going to stop, having thrown an prodigious dice roll the silly buggers just kept on going into enemy territory!
Oberleutnant Wagner meanwhile had finally found his way somewhere near the enemy when he promptly stood in dog shite, his status being reduced from a level two down to a level one leader. His men began to fire at the flank of the French line but the inconsiderate French went and moved forward. As the Austrians were firing uncontrolled the dozy buggers proceeded to keep firing into the smoke hitting nothing. What a wanker! 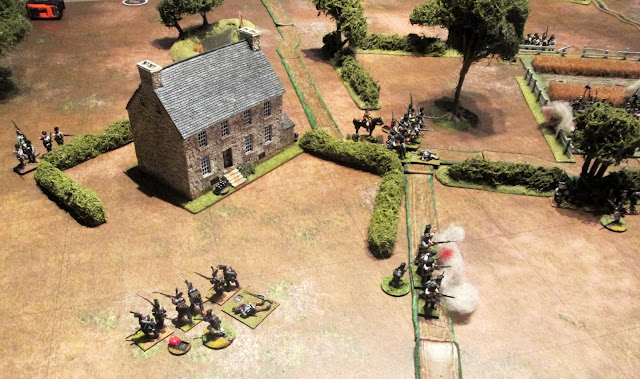 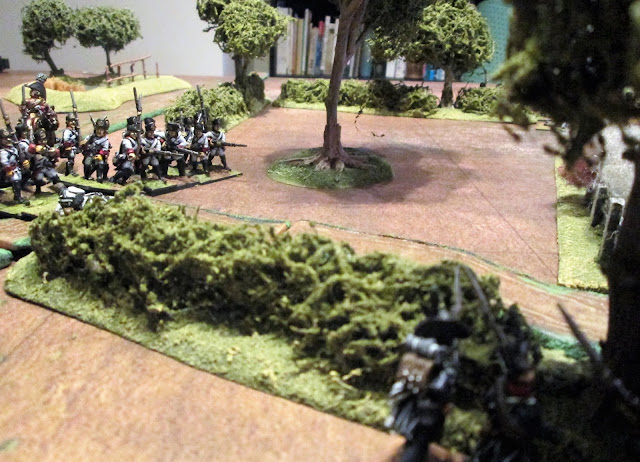 Neal, or Lieutenent Victor as he will now be known promptly detached his trusty side kick Sous Lieutenent Eiffel with eight men to cover his left flank while a group of French light infantry ran along the hedge and fired into the side of the hapless Oberleutnant Wagner's men. It wasn't looking great for the Austrians at this stage.

Next turn, Tiffin, first token out of the bag and it was the Tiffin token, Huzzar!. All units reloaded and dog shite removed from boots, Oberleutnant Wagner's that is! He had by this time been wounded by those pesky French light infantry so the unit could only be activated by using flags. One roll of the dice, back under control and the useless Austrian buggers proceeded to completely redeem themselves by blowing away the eight Frenchmen to their front, helped no doubt by the main formation firing into their flank and causing double shock. 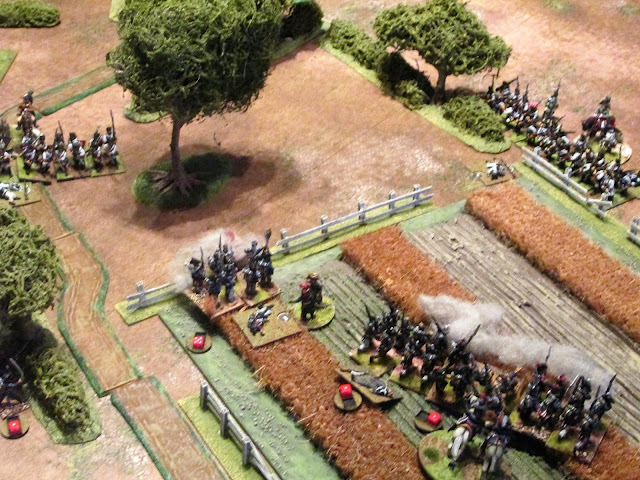 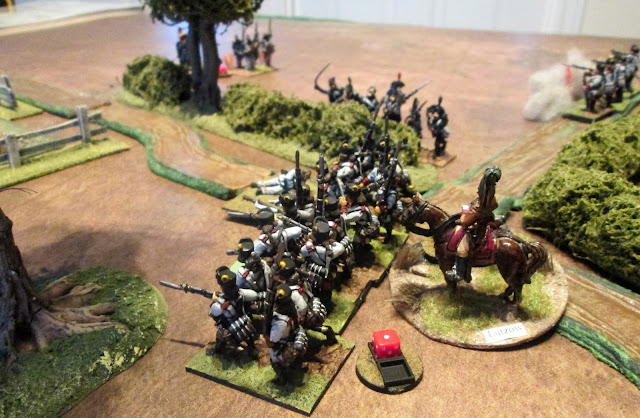 If you are squeamish do not look at the next few photographs. The two main formations had been blowing rather large lumps out of each other for quite a while now, the range was getting longer as both units stepped back in the face of the hail of musket balls coming towards them. 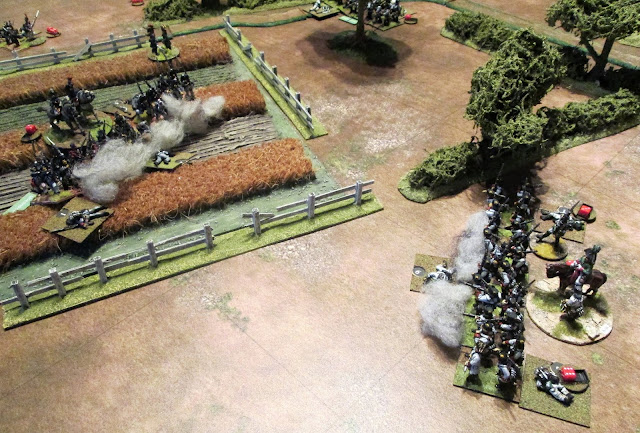 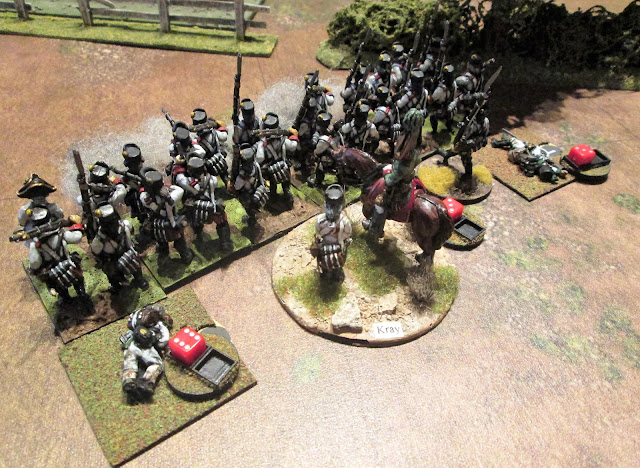 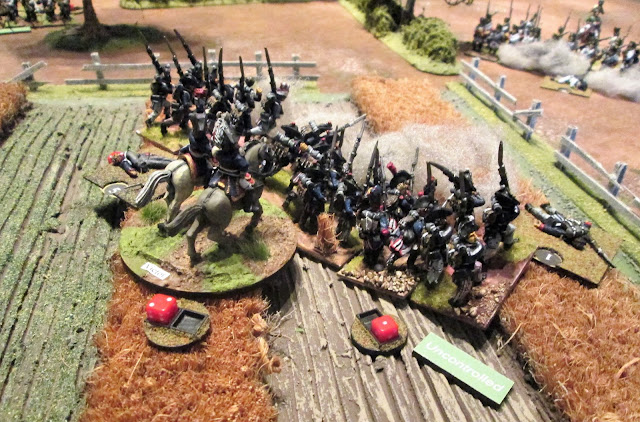 Eventually the pressure had to tell fired on from the front and flank and the French main line broke up. With the small flanking force running and the light infantry falling back  Lieutenent Victor's men could take no more and Neal ran out of Force Moral points. The final photograph also shows the state of the main Austrian formation only just remaining under control but being split up themselves. 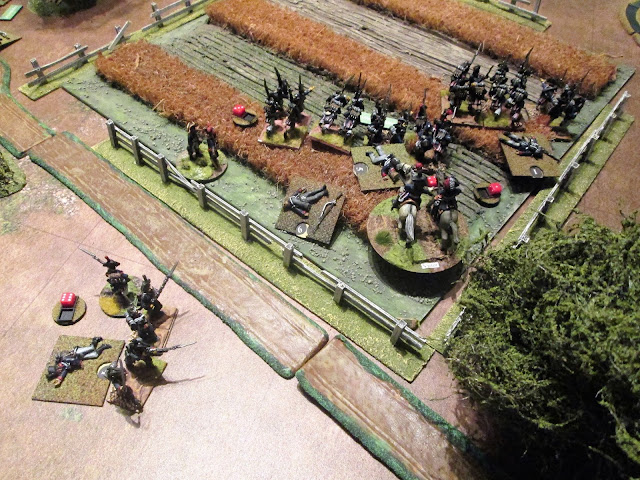 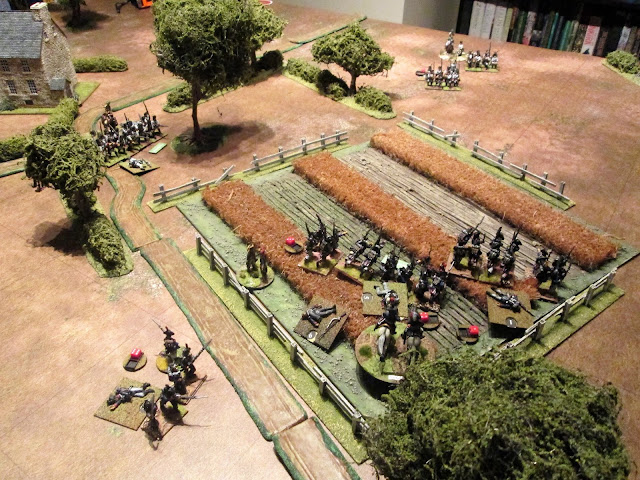 This was a fantastic game, Sharp Practice only seems to get better and better with each outing and both Neal and I had great fun playing. A close run thing indeed.
Dave.
Posted by Dave Huntley (sheepman) at 12:41 13 comments:

Having somewhat sickened myself painting 10mm I felt that a change of scale was in order, so looking into the 28mm pile of unpainted figures I decided upon a box of Perry French 1812-15 plastic infantry. Now the last plastic infantry I did was a box of the original Vitrix which from memory you had so many parts that I'm sure I remember gluing the bollocks onto a couple of figures! So it was a relatively pleasant surprise to find that the figures could be assembled fairly easily.
Painting followed the standard procedure and the following unit is the result: 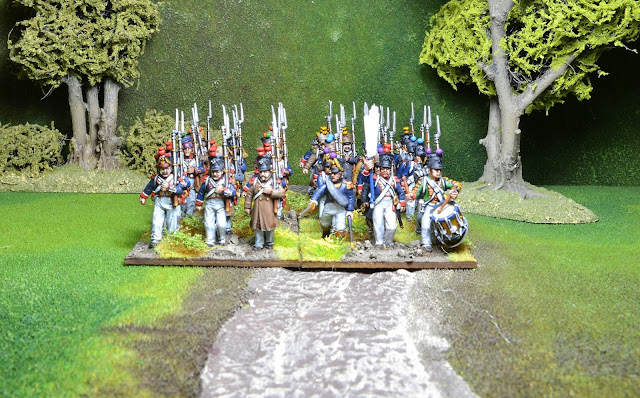 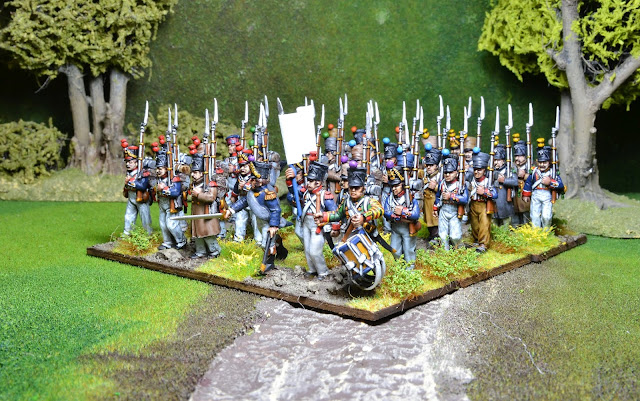 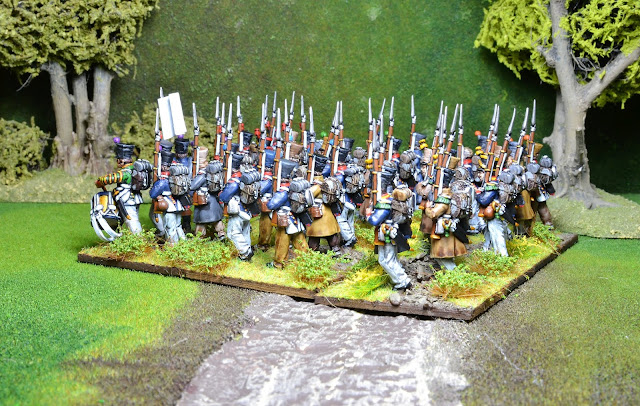 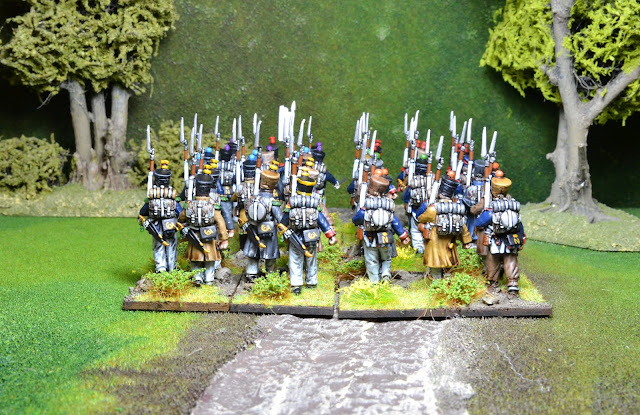 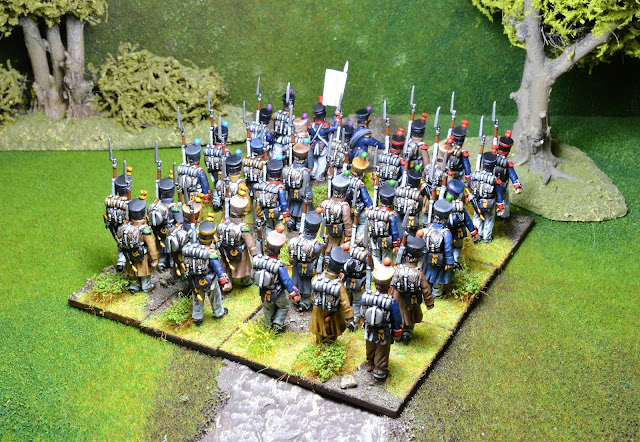 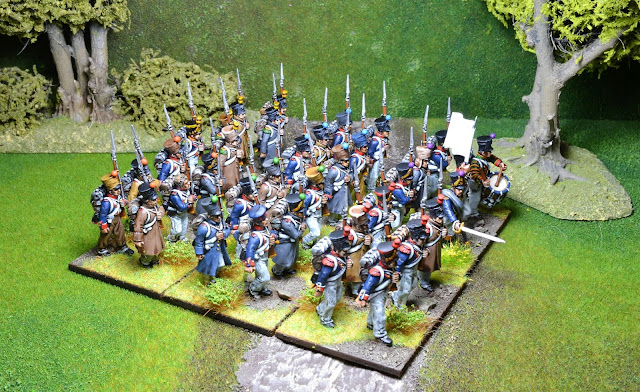 Next, well as I am particularly enjoying playing Sharp Practice and given the fact that there are some ready painted 15mm Franco Prussian figures doing nothing in particular I have decided to base them up for a game. We will see if I can stretch the range of these excellent rules to cover this period.
Dave.
Posted by Dave Huntley (sheepman) at 09:19 5 comments: