Caesar Vs Pompey campaign. Battle of Neapolis 49BC

The end of the campaigning season of 49BC was fast approaching, Caesar knew that the Italian peninsular had to be secured following his victory over Pompey at the battle of Rome and though disturbing news had reached him of the Pompeian victory at the battle of Narbo (see previous posts) Caesar had to force Pompey out of Italy and overawe the senate in Rome. Pompey could then be dealt with the following year while Mark Anthony restored the situation in Iberia.
Pompey the Great however understood well that he alone stood as the rock upon which Republican Rome could cling to during this time of crisis, he and as many of remaining force must withdraw to the east in order to regroup and subsequently return to save Rome from the tyrant. 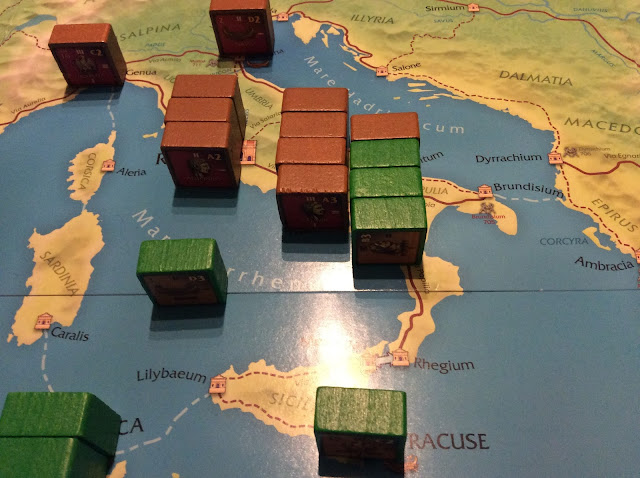 Leaving Mark Anthony to secure Rome and of course make the remaining senators see the error of their ways, Caesar's four strong legions advanced rapidly from Rome to Neapolis (Naples) catching Pompey before he could withdraw. 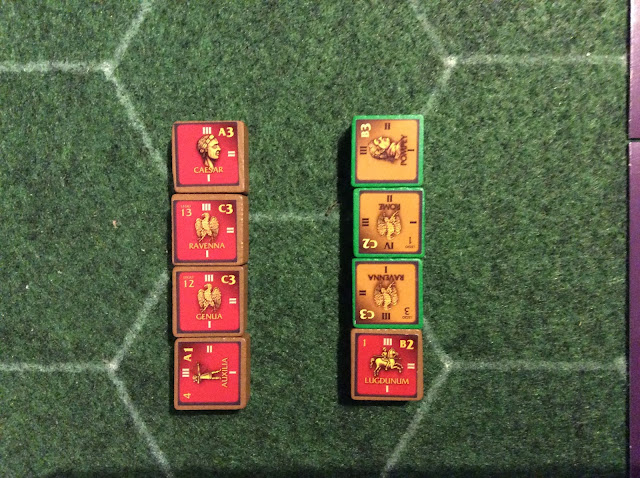 The campaign blocks used in the encounter before being transferred to the table top. As usual the strength points at the top of the block are the ones used, one SP = one unit on the table with the named commanders able to choose Legion, cavalry or skirmish units from their strength points. Remember Pompey still holds the defecting Caesarian cavalry unit. 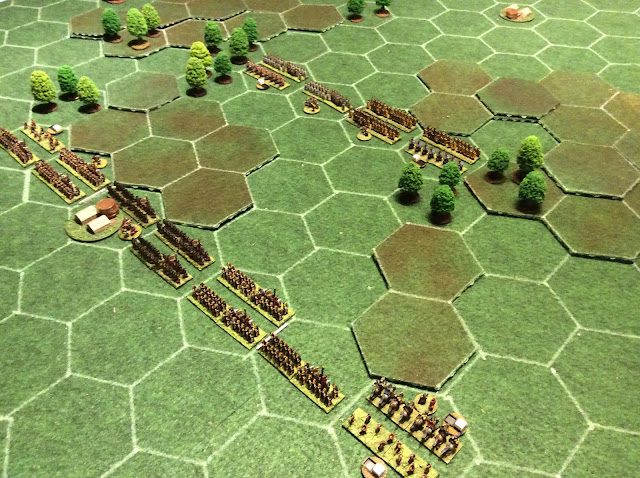 Starting positions, Pompey (on the right) had to begin the battle three quarters of the way up the table, this replicates the campaign battle rule that at least one round of combat must be fought before one of the two forces have the option of withdrawing from the battle. This gives Caesar (on the left) a reasonable chance to inflict casualties or destroy Pompey before he can get off the table. The huge difference between the two forces can be seen in this picture. 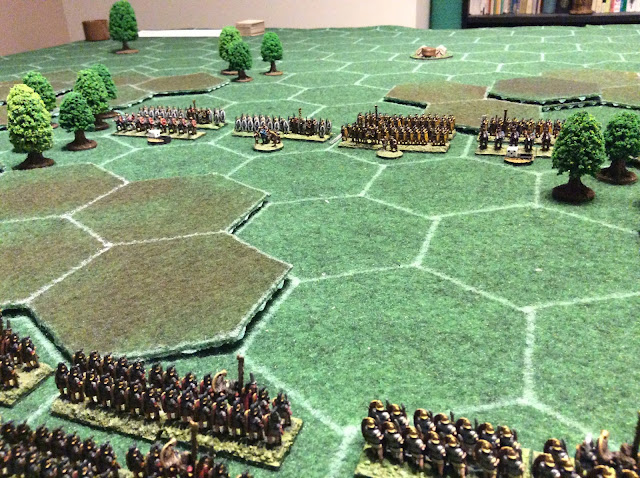 View from the Caesarian side. 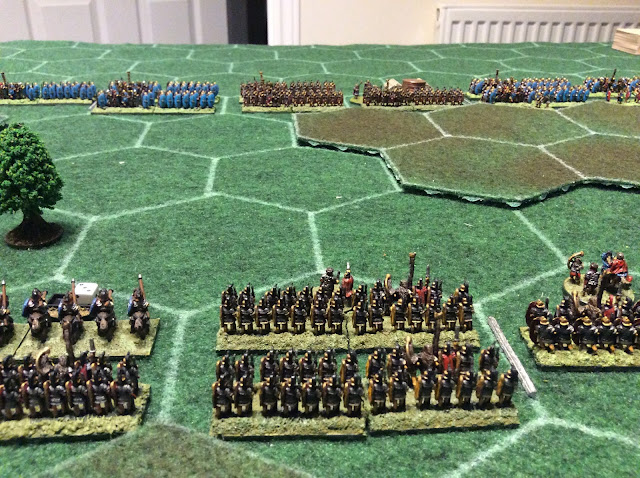 View from the Pompeian side. 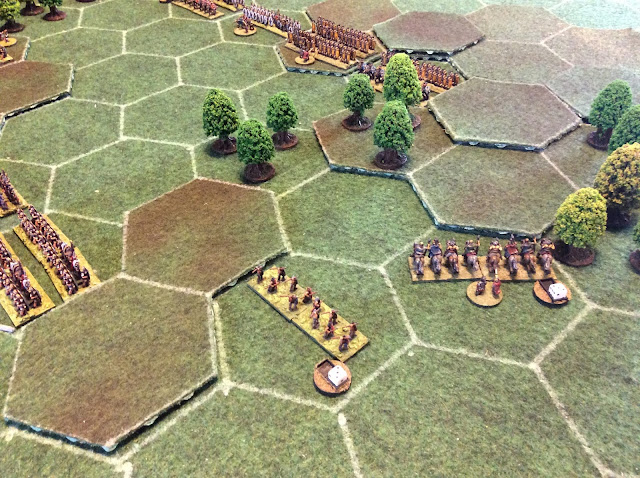 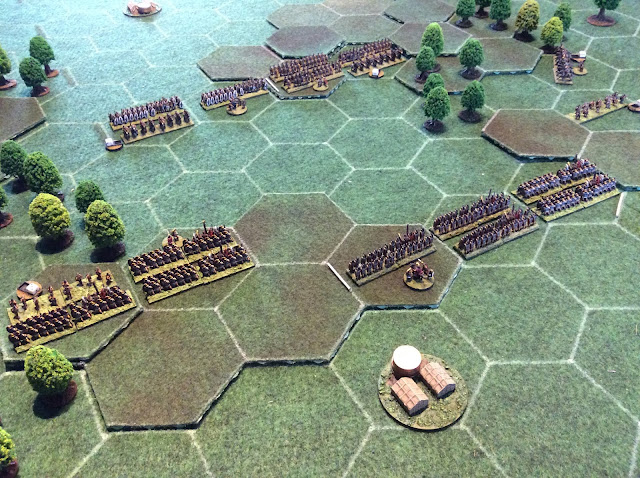 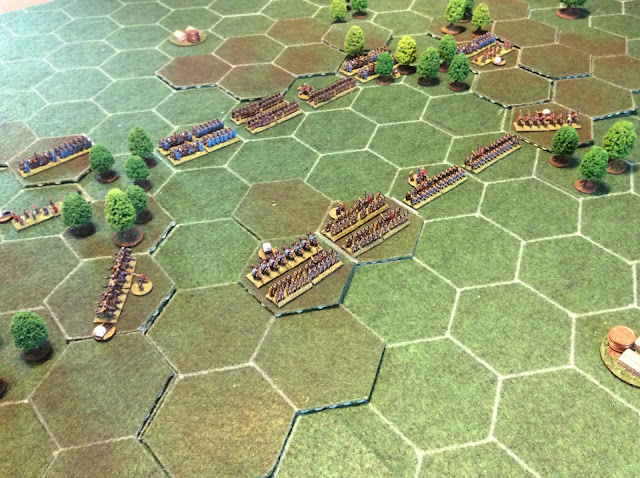 The pictures above show Caesar utilising his advantage in numbers pushing both his wings forward in order to outflank his opponent. Pompey slowly withdraws pushing his cavalry out to the right. In the To the Strongest rules withdrawing backwards is classed as a difficult move so the right cards must be turned in order to allow this to happen - tense stuff! 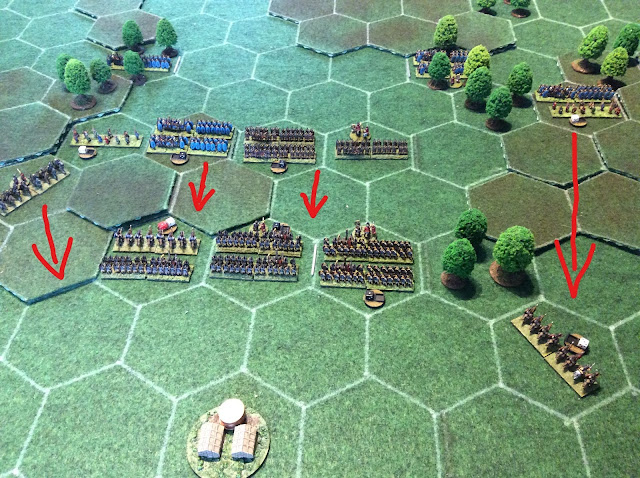 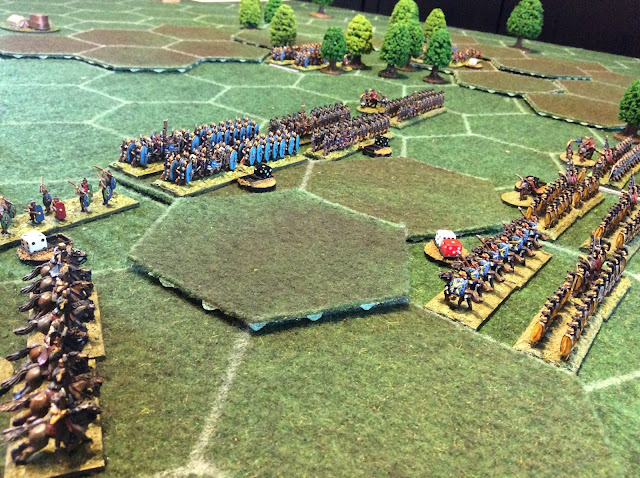 These photos show the situation at the end of each turn so the Caesarian forces get close enough to throw pilum, and get the odd hit in but cannot get the right card to land a heavy punch onto their opponents, Pompey skillfully pulls his troops back just in time. 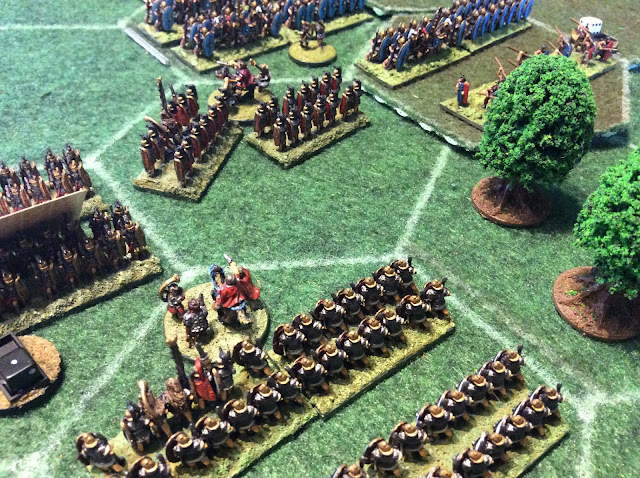 Finally Caesar gets his legions close enough, the cards turn, hit and counter hit and the Pompeian legion routs one of their opposite number. Fortunately the rout does not spread. 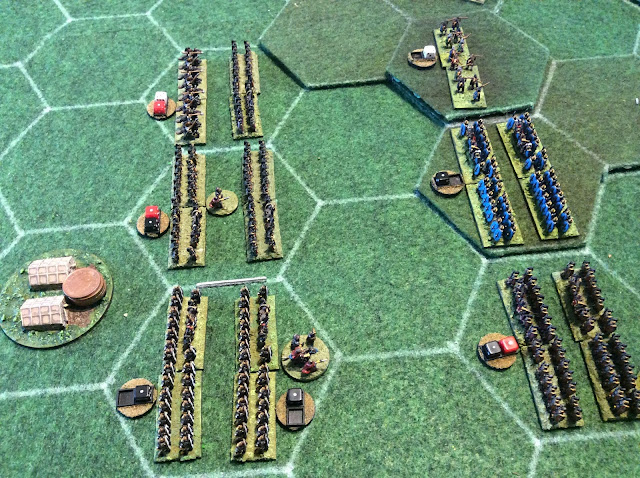 Damage has been inflicted on both sides but Pompey's camp (and the withdrawal point) is in sight. 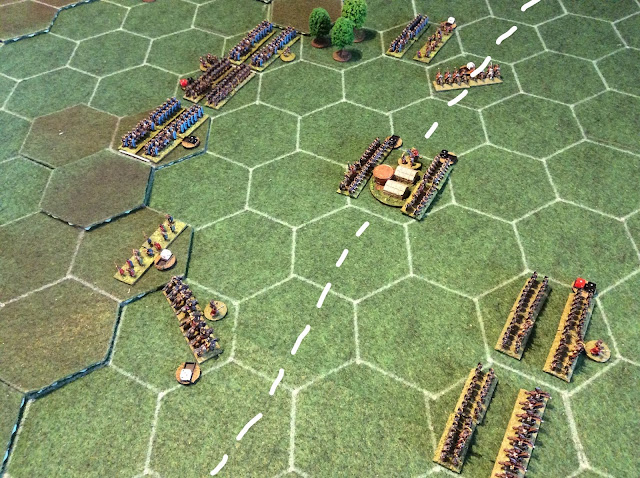 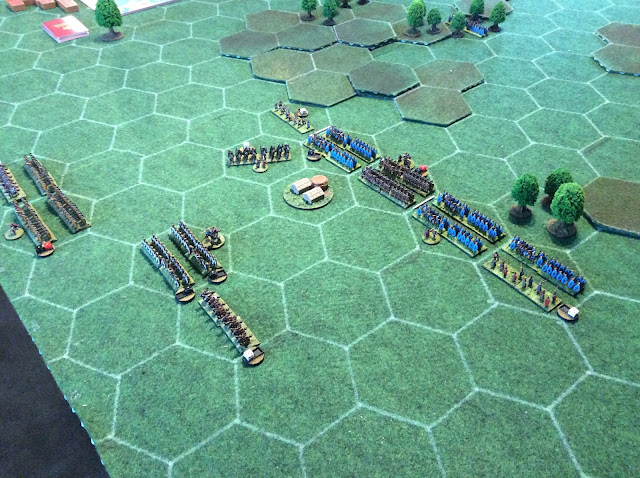 The dotted line in the top picture shows the withdrawal line. Pompey's has pulled off a very skillful withdrawal in front of superior enemy forces and has escaped with his army intact. Caesar must reflect on a missed opportunity.
A very enjoyable game even though the forces never really got stuck in. This was Pompey's objective of course and the cards as appose to dice favoured him immensely, given better luck Caesar should have given him a good pasting but it was not to be. 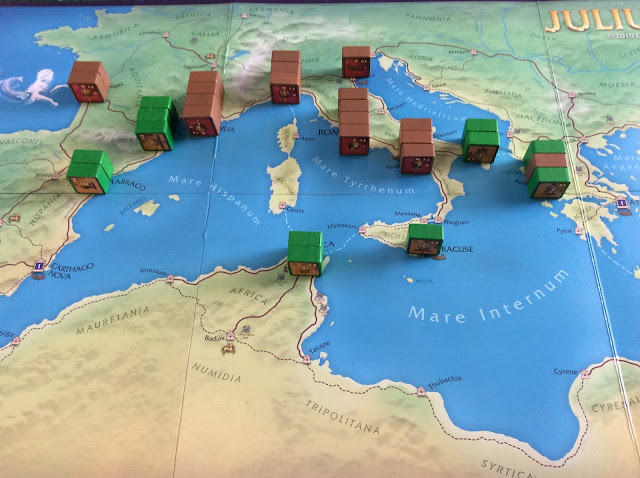 The campaign map at the end of 49BC with both sides going into winter quarters. Pompey's forces though weak in numbers hold all of the Iberian peninsula and though Pompey himself has been driven out of Italy his forces continue to hold Sicily and he will gather men from the east to fight on in Greece. Caesar holds Rome and once secure will push on eastwards. A counter punch by Mark Anthony must take Hispania.
I may take a small break here in order to clear the table and have a couple of other games of different periods but this will continue as I'm enjoying it too much to stop!
Dave.
Posted by Dave Huntley (sheepman) at 10:15

Email ThisBlogThis!Share to TwitterShare to FacebookShare to Pinterest
Labels: 10mm Caesarian Roman, To The Strongest