To The Strongest Caesarian 10mm

Though I haven't for a while I do actually play a wargame occasionally, painting and collecting units/figures is my thing but it is still nice to sometimes give the lads a runout as it were!

My Caesarian Roman chaps have not been on the table for a while so I dusted them off and set to with a civil war Caesar Vs Pompey bash on the hex table using the brilliant To the Strongest rules which are recommended to be played on a table marked out with squares but can I assure you be played very easily using hexes.

The two forces were set out, both balanced points wise, Pompay's force (yellow and white shields) having more skirmish troops plus three Heffalump's but with the yellow shield half legion being classed as raw (+7 save as a pose to +6 for the other legionaries). While Caesars force were standard legionary's plus three manuballista which I allowed to move as per infantry.

The field of battle, Pompay's force to the top of the picture, Ceasar's to the bottom. Note the white die behind units, missile troops have a number of shots allocated depending on their weapon, legionaries have one hit pip denoting the use of the pilum. Also the coins in the two camps show the moral of the armies, you lose an appropriate number of coins depending on the unit lost, run out of coins and your army breaks. 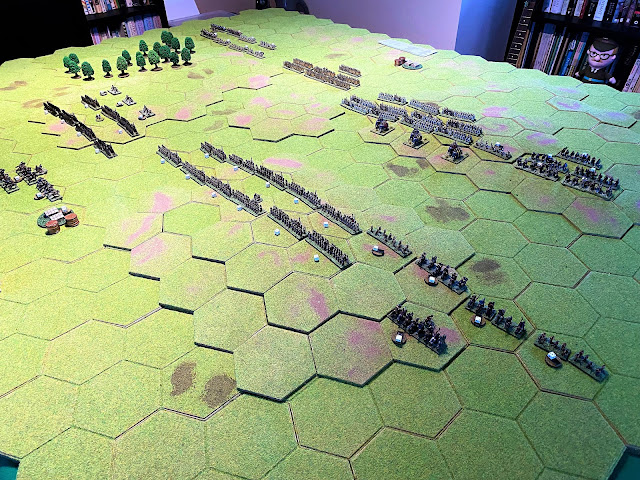 Email ThisBlogThis!Share to TwitterShare to FacebookShare to Pinterest
Labels: 10mm Caesarian Roman, To The Strongest